In Florida, more and more violent hurricanes, but no fewer inhabitants

"Southwest Florida is my paradise on Earth, and in South Florida there are hurricanes. 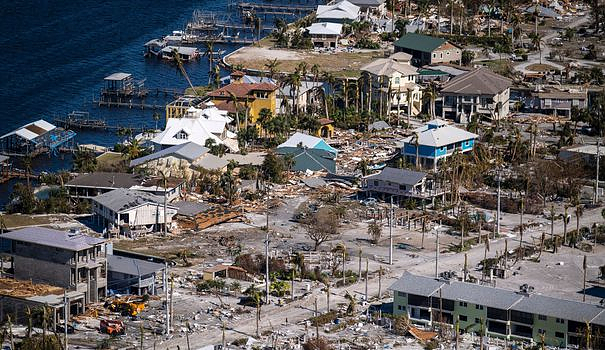 "Southwest Florida is my paradise on Earth, and in South Florida there are hurricanes. You have to deal with it," the 28-year-old said in front of a debris-strewn street.

Despite warnings from experts, who warn of the increased likelihood of violent hurricanes and floods due to climate change, the southeastern coasts of the United States are still attracting more inhabitants.

The area is criss-crossed by navigable canals giving access to the Caloosahatchee River, which empties into the Gulf of Mexico. Thus, many people can enjoy a house with a view of the water, and even a small boat.

But the region, initially marshy, had to be drained. Mangroves and corals have been destroyed. Result: a city very vulnerable to flooding.

She was hit hard by Ian, who got stronger very quickly, fueled by warmer waters and higher humidity in the air due to climate change.

In the streets of Cape Coral, dozens of residents are now piling up their belongings in front of their homes: beds, cupboards or refrigerators that have become unusable.

"We are going to rebuild and we hope it will be 100 years before the next big storm," Tamara Lang, 56, told AFP.

She moved from Chicago (north) and bought her house in Cape Coral only a few months ago. In making her choice, she did not think of hurricanes. But she has no intention of leaving. "We love being here. It's been our cocoon of happiness since we arrived."

For the sociologist and demographer Mathew Hauer, who studies the effect of climate change on migration, the population is not as informed as it should be about the dangers.

"If people really understood the flood risk for these properties, we would see changes in where they choose to buy their homes and live," said the assistant professor at Florida State University.

Another problem: the maps of flood zones drawn up by the federal agency in charge of natural disasters (Fema) are "obsolete", explains to AFP Gavin Smith, professor of environmental planning at the University of North Carolina. "They should be seen as a minimum but are often used to regulate where and how to develop" a city, he says.

According to US Census data, counties bordering the coasts of North, South and Georgia Carolina are clearly gaining the most residents. Florida had 2.7 million more residents in 2020 (21.5 million total) than in 2010.

"The southeastern United States continues to grow very rapidly," says Mathew Hauer, "and I don't see any signs that the southward migration trend is going to reverse."

However, if the sea level rises by 0.9 meters by the end of the century, around 4.5 million people will have to move to the United States, according to a study published in the journal Nature. Florida accounts for a quarter.

The "State of the Sun", as it is nicknamed, particularly attracts many retirees. The coasts also represent an economic pole, with jobs that can be directly linked to the sea (fishing, tourism, etc.).

And, once installed, difficult to leave.

A majority of Americans (67%) say they would rather rebuild their home than move after a natural disaster, according to a 2021 poll.

This is called "the paradox of immobility", explains Mathew Hauer. The reasons are partly psychological: fleeing gives the impression of "giving up".

But they are also social - not to move away from loved ones - and economic.

In addition, "minimizing the real risks we face" is "a universal human trait", believes Gavin Smith.

Irene Giordano, 56, moved to Cape Coral from (eastern) Virginia in 2019. "I don't think we're going to leave because we have nowhere to go," she said. In his house, the water rose up to 50 cm. "I pray this will be the last time in my life."