In conservative Wyoming, an unlikely haven for LGBT people

"It's always a lot of fun for me to say that I came out of the closet in Wyoming," says Ray Kasckow, a transgender person residing in this town nestled between two mountains in the American West. 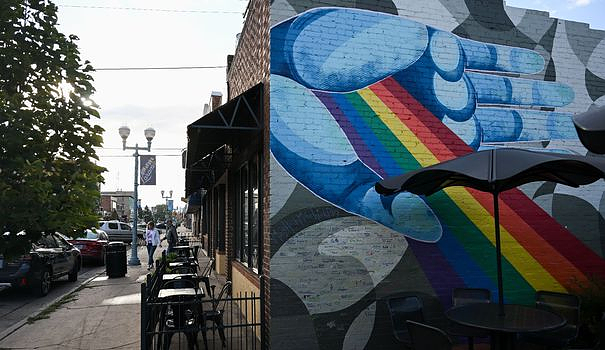 "It's always a lot of fun for me to say that I came out of the closet in Wyoming," says Ray Kasckow, a transgender person residing in this town nestled between two mountains in the American West.

In this state, known for being the least populated in America and which gave Donald Trump his best score in 2020, "people do not conceive how this can be possible", smiles Ray, 27.

For many Americans, Wyoming and the 30,000 inhabitants of Laramie will forever be associated with the name of Matthew Shepard.

On October 6, 1998, this 21-year-old student was dragged out of a city bar by two young men. After a car ride, they beat him savagely with revolver butts before leaving him for dead, tied to a fence. Matthew Shepard is found 18 hours later by a cyclist who first takes him for a scarecrow.

Unconscious, he died a few days later in hospital.

The death of Matthew Shepard sounds like a warning shot for American progressives, shining a harsh light on homophobic violence in the country.

In 2009, a law bearing the name of the frail political science student was adopted at the federal level to strengthen the fight against homophobic crimes.

But in Laramie, it is first and foremost the exodus. "Teachers left, students left, residents left, out of fear," recalls Judy Shepard, Matthew's mother.

Alongside her husband Dennis, she founded the Matthew Shepard Foundation, "to try to improve the lives of Matt's friends and peers", says the septuagenarian.

A New York theater group travels there six times to create "The Laramie Project", a play with global resonance to explain how and why this sleepy town in the heart of the Great Plains gave birth to two assassins.

This is partly due to the cowboy mentality, an ode to virility and masculinity, which reigns in this extremely rural and isolated state.

In this city, which lives to the rhythm of the long freight trains that cross it, the associative network is woven little by little. Until 2015, Laramie became the first city in Wyoming to pass an ordinance prohibiting discrimination against LGBT (lesbian, gay, bisexual and transgender) people.

In front of most businesses in Laramie, and all around the old bar where Matthew Shepard was kidnapped, now fly rainbow flags, a symbol of the LGBT community.

We also come across young people wearing pins with the neutral pronoun "they", claimed by people who do not identify as either a man or a woman.

"People settle in Laramie because they know they will find a community, friends and a support system there", says Ray Kasckow.

This kind of mini-shelter contrasts in many ways with how LGBT people are treated in the rest of the state, says Tyler Wolfgang, a member of the Laramie Pridefest association.

“At the local assembly, we see the emergence of a lot of transphobic laws” which try to prohibit transgender athletes from competing in female competitions, or to prevent them from using the toilets reflecting their identity, alerts this non-binary person.

This offensive against transgender people is echoed in most conservative American states, with several elected Republicans having redoubled their attacks two months before the midterm legislative elections.

"We are back to square one", laments Judy Shepard, denouncing "a terrible climate of ignorance and hatred towards the gay community and all marginalized groups".

But since 1998 and Matthew's death, "we have organized ourselves," she says. "So many people have come out of the closet and are comfortable with who they are, it's going to be a lot harder to ignore us," she said.

Confirmation of his national prominence, Matthew Shepard's ashes were transferred to the Washington National Cathedral on the 20th anniversary of his death.

In Laramie, a bench was installed in the middle of the campus of the University of Wyoming, where he was studying. With this plate: "He continues to print his mark".