Your message goes from Hamburg to the whole world. 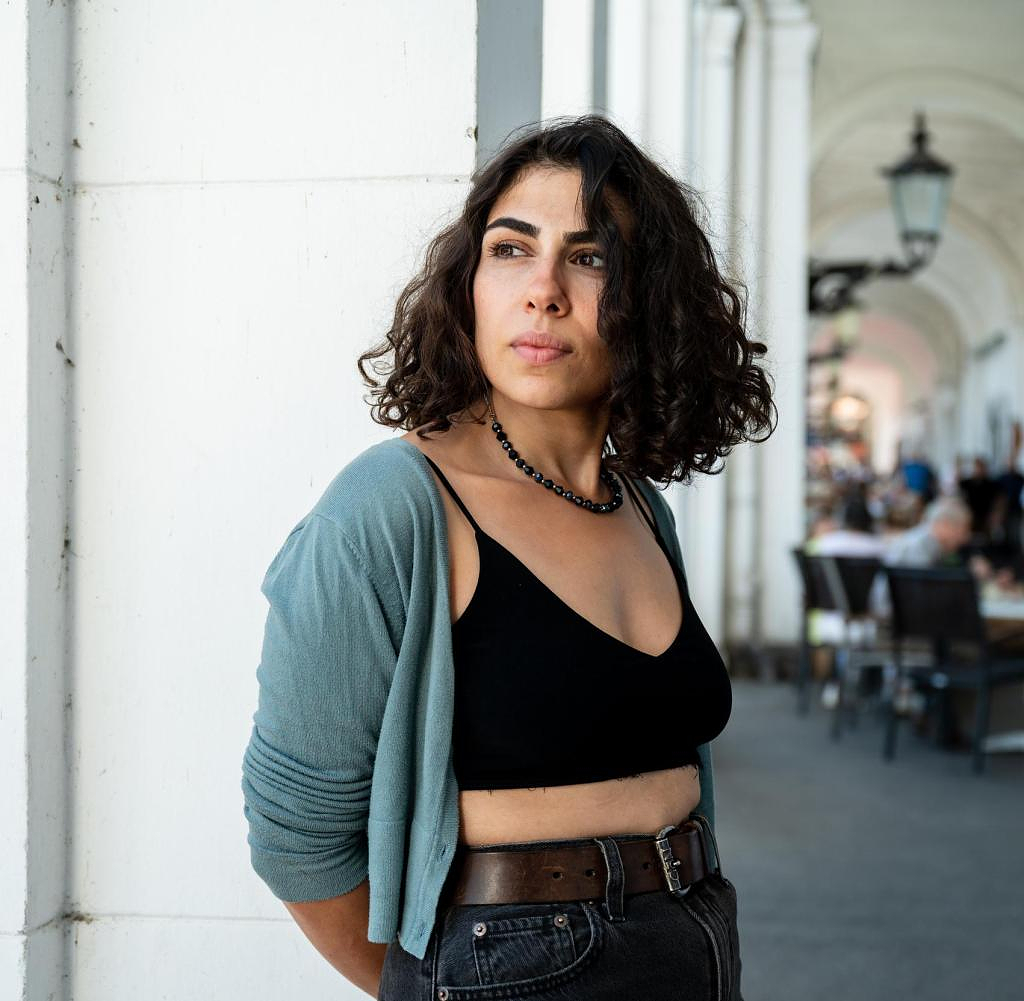 A deliberate message: “I will not allow my culture to be forbidden. I am an emancipated, independent woman,” she says in an interview. In the music video for the song, she walks along the banks of the Elbe in a silvery, sunny light, with the cranes of the Port of Hamburg in the background.

Hamburg – the gateway to the world – means freedom for Netirk. The 34-year-old has lived here for three years. She feels comfortable between her flat share in the Schanze and the rehearsal room on the Veddel. Her favorite place is the Landungsbrücken, she says. "The place reminds me of Istanbul, where I studied literature and learned music." She also likes the many parks and appreciates the free theater scene here. Netirk sees herself as a versatile artist, she sings, writes songs and makes films.

Hêja Netirk comes from Mardin, a city in south-eastern Anatolia, around 20 kilometers north of the Turkish-Syrian border. In 2018, she fled to Germany after spending nine months in an Istanbul prison as a Kurdish political activist and facing years of imprisonment. She used the time to network with other imprisoned artists, learned to play the guitar, and wrote her first songs.

In Hamburg, she attended a further training course for media workers with a history of flight at the Hamburg Media School. As part of this, she produced a short documentary about her arrival in Germany: In "Die Nackte", which was shown on Phoenix and can still be seen on YouTube, she processed her first experiences in Germany. She applied for asylum at the airport.

She had to open her suitcase and was searched by border officials, she recalls. While fellow combatants and she, as political prisoners in Turkey, had fought for the right to no longer be searched naked, she had to endure this procedure here.

"I wanted to cry the whole time, but I didn't cry," she writes in the synopsis for the film. When the underwear fell, tears ran down her face. "I'm crying because my heart is completely naked." After that, she felt guilty about herself for a year because she had to give up her attitude and dignity at that moment. "Now I forgive myself for just asking for help."

Netirk founded the music duo "Birds of Babylon" in Hamburg, and now she has released her first solo album "Pistepistek Bilind" (roughly: "Hohes Flüstern") with the support of the Federal Music Initiative. For this she set modern Kurdish poems to music and composed the music for them. “My goal is defolklorization. These lyrics should live today and speak to us today,” says Netirk. She finds the album experimental, trying out different styles of music and combining them with Kurdish poetry.

Netirk also processes her own story “as a woman in exile”, as she puts it, in her new songs. So she took an Iranian story about a little fish fighting injustice as inspiration and poured it into a song text. In her lines, the fish swims across the ocean towards a more beautiful life full of joy and fun.

Netirk now enjoys the good life as much as possible in her adopted home of Hamburg. The beginning was difficult, alone in a foreign city, without language skills, without papers and without the prospect of being able to travel to Turkey again in the near future. “I first had to rediscover my identity here,” she says of this time. Ultimately, she learned German quite quickly, only sometimes she lapses into English when she is missing certain terms.

Her artistic projects have already been funded by the federal and state governments. Last year she received the Intro grant for refugee artists from the Department for Culture and Media, and she is currently a grantee from the Hamburg Claussen-Simon Foundation, which supports talented young people in various areas.

She writes financial plans for her applications, fills out forms – she's practiced now. Life as an artist in exile would probably not be manageable without family support, especially not in her niche. "I sing in Kurdish, but there are not many people who understand this language as it has long been banned in Turkey."

Her relatives still live in Kurdistan, whose territory is spread across Turkey, Iran, Iraq and Syria. Her entire family is political, she says. "There has been a war in my country since I was born, 50 million Kurds don't have their own state." Netirk wants to continue fighting for them, in their own way with music. It was her activism that got her started with her, as well as with theater and film. "Sometimes I get tired of fighting, but what should I do?"

Before she fled, she had imagined not having to laboriously swim through the ocean like the little fish in the story, but rather flying over the border to Germany like a bird. Upon arrival, however, she only felt "like a dried-up leaf that has lost its tree".

Contact with other artists gave her new strength. She now has a solid circle of friends in Hamburg, he and Netirk's fan base - her channel has more than 17,000 subscribers on YouTube alone - help her to break bad news, such as the recent bombing of "Rojava", how the region of West Kurdistan in Northern and Eastern Syria calls to endure. Her new identity is now "international," she says. And when the whole world is one home, it doesn't need the one tree.

‹ ›
Keywords:
HamburgKulturKurdenMigrationFlüchtlingeSängerinnenSchanzenviertelSoloAlbumMusikWestkurdistanYouTubeHêja NetirkTürkeiOstsyrien
Your comment has been forwarded to the administrator for approval.×
Warning! Will constitute a criminal offense, illegal, threatening, offensive, insulting and swearing, derogatory, defamatory, vulgar, pornographic, indecent, personality rights, damaging or similar nature in the nature of all kinds of financial content, legal, criminal and administrative responsibility for the content of the sender member / members are belong.
Related News