Post a Comment Print Share on Facebook
Famagusta
DOLLAR 18,64
EURO 19,72
GOLD 1.082,78
BIST 4.962,97
These tips will help you become the perfect reader
Polars: nine nuggets to offer at Christmas... but not to just anyone!
The secret of the Pfister siblings
Back to the Stone Age? The abolition of agriculture
The most beautiful Christmas film without Christmas
FDP demands fundamental reform of public service broadcasting
Schlesinger planned the RBB "Digital Palace" for 311 million...
The failure of the totalitarian no-Covid idea - and the silence of its...
The failing state and its new theaters of war
Schlesinger planned the RBB "Digital Palace" for 311 million...

France: opening of the appeal trial of the foiled Thalys attack

"I have nothing to declare," said the accused in French after the presentation of the facts by President David Hill. 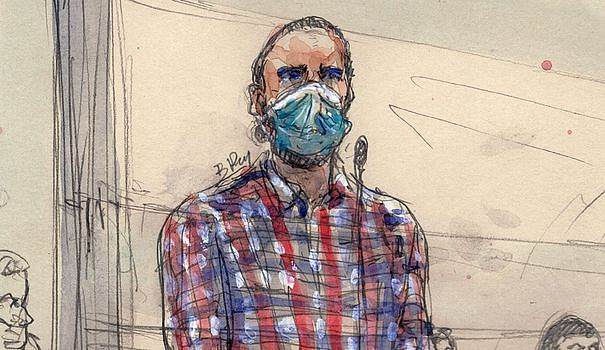 "I have nothing to declare," said the accused in French after the presentation of the facts by President David Hill.

In white pants and jacket over a black jersey, beard and brown hair tied in a bun, looking absent, the accused followed the presentation of the president.

On August 21, 2015, Ayoub El Khazzani, 33, boarded the Thalys Amsterdam-Paris train in Brussels armed with a Kalashnikov, a semi-automatic pistol, a box cutter and nearly 300 rounds of ammunition.

He had been prevented from committing a massacre only by the "heroic" intervention of several passengers, including three American soldiers in civilian clothes who were then on vacation, the court had said during the first trial.

These three Americans, Anthony Sadler, Alek Skarlatos and Spencer Stone, since decorated with the Legion of Honor and who received French nationality in February 2019 for having "risked their lives for the values ​​of the Republic", should testify on November 29 in front of the court.

In accordance with the requisitions of the public prosecutor, the court sentenced Ayoub El Khazzani to life imprisonment for "attempted terrorist assassinations". His sentence had been accompanied by a security period of twenty-two years and a permanent ban from French territory after his sentence.

This first trial did not shed any light on the terrorist project targeting Thalys passengers, which announced the attacks of 13 November 2015 in Paris and Saint-Denis (a town north of the French capital), coordinated by Ayoub El Khazzani's principal, Abdelhamid Abaaoud.

"Emir" of the Islamic State organization (IS), killed on November 18, 2015 during an assault by the security forces against his hideout in Saint-Denis, Abdelhamid Abaaoud is considered to be the leader of the commandos who caused the death of 130 people in Paris and Saint-Denis. He himself was part of the commando which fired on Parisian terraces.

During the first trial, Ayoub El Khazzani explained that he wanted to "revenge" the civilian victims of the bombardments of Syrian President Bashar al-Assad and the international coalition.

It was during a short stay in Syria in May 2015 that he was trained by Abdelhamid Abaaoud, who told him how to satisfy his desire for revenge. "Abaaoud knows how to manipulate, throw oil on the fire," the accused told the court.

It was in the company of the same Abdelhamid Abaaoud that Ayoub El Khazzani had reached Europe by taking "the Balkan route" passing in particular through Turkey, Greece, North Macedonia, Hungary and Austria.

During the first trial, Ayoub El Khazzani had maintained that he had received the sole mission of his sponsor to kill American soldiers and members of the European Commission present on board the train.

This explanation had been deemed "fanciful" by the court.

The goal of Ayoub El Khazzani, who presented himself as "a noble IS fighter", was to kill "blindly and indiscriminately" the 200 or so passengers on the train, the court had underlined.

The Moroccan had also said, without convincing, that he had given up killing, disarmed by the smile of a first passenger then by the humanity of the eyes met on the train.

On the contrary, the court recalled that the failed attack was part "in a real campaign of mass attacks which finds its peak" in the attacks of November 13 in Paris and in March 2016 in Brussels.

The appeal trial is scheduled until December 9.