Eric Arella had been leading investigations into serious crime and in particular narcobanditism for seven years from Perpignan to Nice, via Marseille, one of the cities most affected by this scourge. 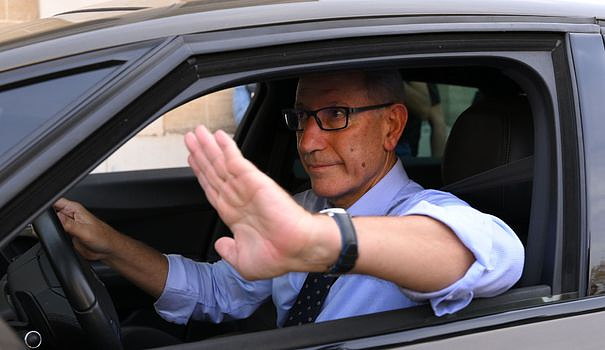 Eric Arella had been leading investigations into serious crime and in particular narcobanditism for seven years from Perpignan to Nice, via Marseille, one of the cities most affected by this scourge.

"It's a shame, we make him wear the hat. He has always been loyal. And it is almost all the officials who are against this reform", wanted by the government, told AFP a source from the PJ in Marseilles. "Everyone is stunned, it's a shock," an executive from a central office of the judicial police told AFP.

It was by a simple phone call that Eric Arella learned of his landing at midday, immediately prompting calls to demonstrate throughout France from police officers and magistrates who had been worried for weeks about the reform in preparation.

This eviction was confirmed to AFP by the general direction of the national police (DGPN). "As with any reform, there are discussions, there may be disagreements. But such disloyalty is not acceptable", says one in the entourage of the DGPN.

The director general of the national police (DGPN), Frédéric Veaux, obviously did not appreciate Thursday being received in Marseille by some 200 officers mobilized against this reform.

On leaving the meeting, Mr. Veaux crossed the corridors in an icy atmosphere, forced to split a hedge of police demonstrating arms crossed and silent, according to a video sent to AFP on Thursday.

"He is blamed for the officers' coup yesterday," commented another local police source.

Immediately after the announcement, hundreds of officers gathered in Marseilles, Toulon or were to do so in Nice and Montpellier and throughout France. In Marseille, there were about 200 shouting "bravo", "thank you boss". They were joined by prosecutors and investigating judges from the specialized interregional jurisdiction which handles serious crime cases.

"The results in Marseille are bad with record levels of homicides while the workforce has been considerably reinforced", was also commented in the entourage of the DGPN to explain the ousting of the one that many magistrates and police call it a "big cop".

Since the beginning of the year, 25 people have been shot dead in homicides linked to drug trafficking in the Bouches-du-Rhône, according to the police headquarters. As throughout 2021.

In Marseilles at the end of June, the Minister of the Interior Gérald Darmanin congratulated himself that "here, 60% of these settlements of accounts are resolved, that is to say that it is an extremely positive figure since, in France, we solve about 30% of attempted homicides.

The reform of the PJ arouses enormous reluctance.

Carried by the Minister of the Interior Gérald Darmanin and Frédéric Veaux, the project plans to place all the police services of a department - intelligence, public security, border police (PAF) and PJ - under the authority of a only Departmental Director of the National Police (DDPN), reporting to the prefect.

"We know that there will be great damage to investigations into organized crime because of the restructuring. We are fighting to defend our core business. It is really a vocation, a personal investment", indicated to the AFP Thierry, brigadier-chief within the Anti-Narcotics Office (Ofast) who demonstrated Friday in Marseille against the ousting of Eric Arella.

"Who will soon be able to deal with our investigations of social and tax fraud, our investigations that we wish to initiate on the large money laundering circuit or on the embezzlement of public funds?", Worried at the end of September the Marseille prosecutor, Dominique Laurens.

The Attorney General of the Versailles Court of Appeal Marc Cimamonti described this reform as "four times bad".

Mr. Arella, who will leave for the IGPN from Monday, is replaced by Dominique Abbenanti, currently security attaché in Algiers, it was added on the side of the DGPN.