Dogs descend from at least two different populations of wolves.

From where did the dog get its name? Scientists have discovered that humans domesticated the wolf (Canis lupus) at least 15,000 years ago during the Ice Age. 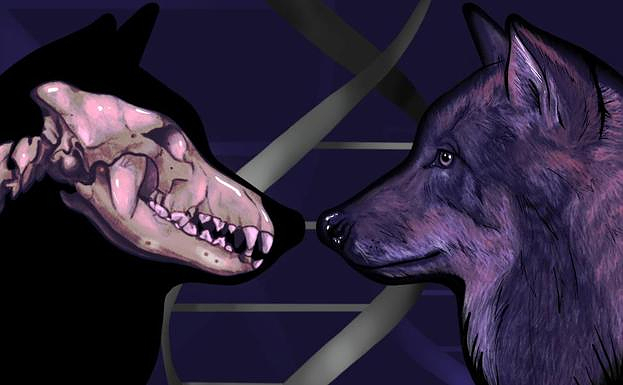 From where did the dog get its name? Scientists have discovered that humans domesticated the wolf (Canis lupus) at least 15,000 years ago during the Ice Age. However, they don't know if this happened once or multiple times. A team of archaeologists and geneticists from around the world has published in Nature that dogs (Canis familiaris) are descended from at least two distinct populations of wolves. It is possible that domestication took place in eastern Eurasia.

Anders Bergstrom from the Francis Crick Institute's Laboratory for Ancient Genomics and his collaborators have analysed 72 wolf genomes. These are those that were found in Europe, Siberia, and the Americas over the past 100,000 years. These correspond to animals that were recovered from 16 countries by archaeologists. The oldest are from Eastern Siberia, while the latest come from Europe and North America.

Six genomes, all Siberian, have been published. Nine laboratories have sequenced 66 genomes for this research. An excellently preserved Siberian Wolf head dating back 32,000 years ago was analyzed. A two-month-old Siberian cub, known as Dogor ('friend’ in Yakut), whose DNA cannot be determined if it is a wolf.

Researchers found that modern and primitive dogs have genetic similarities to ancient wolves from Asia, which suggests domestication in eastern Eurasia. Researchers also discovered evidence that dogs descend from two populations wolves. One oriental origin is what appears to be the source of the first dogs from Siberia, America, and northeastern Europe. The Near Eastern wolves are also evident in the descendants of the dogs that lived in the Near East, Africa and South Europe.

Bergstrom says that the dogs he discovered came from two distinct wolf populations. One was an eastern source which produced all dogs, and one that produced some dogs. The authors suggest that there are two possibilities for this dual origin. Either the wolf was domesticated multiple time and the resulting dog population mixed or the wolf was domesticated once and primitive dogs were mixed with wolves later.

Researchers have been able see how the DNA of wolves has changed over the years, as the 72 wolf genomes cover approximately 30,000 generations. Researchers have seen that a genetic variant on chromosome 25, which was once very rare, became common in all wolves. It is now found in all wolves. It affects the gene responsible for the development of the jaw and skull bones. Although the authors think that this variant was spread by an increase in prey availability during the Ice Age, it could have given wolves with certain head shapes an advantage. However, they warn that there may be other functions to the gene.

Pontus Skoglund, a researcher at the Francis Crick Institute's Ancient Genomics Laboratory, said that this is the first time scientists have followed natural selection in large animals over a 100,000 year time span. This allows them to see evolution unfold in real-time rather than trying reconstruct it from current DNA. Researchers believe that all mutations in wolves were spread quickly because of "the species being extremely connected across great distances." This connectivity may be one reason that wolves survived the Ice Age, while large carnivores like large carnivores vanished.

‹ ›
Keywords:
PerrosDesciendenPoblacionesDistintasLobos
Your comment has been forwarded to the administrator for approval.×
Warning! Will constitute a criminal offense, illegal, threatening, offensive, insulting and swearing, derogatory, defamatory, vulgar, pornographic, indecent, personality rights, damaging or similar nature in the nature of all kinds of financial content, legal, criminal and administrative responsibility for the content of the sender member / members are belong.
Related News