Lucia Tejero (director of Cabo De Gata-Nijar National Park) explained that technicians and environmental agents were alert at all times to the problem in Cabo de Galta's artificial salt flats. 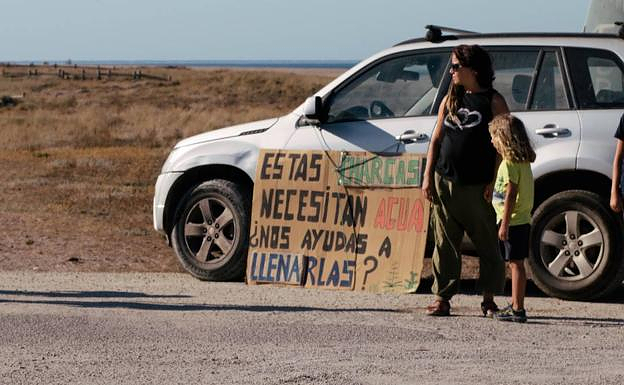 Lucia Tejero (director of Cabo De Gata-Nijar National Park) explained that technicians and environmental agents were alert at all times to the problem in Cabo de Galta's artificial salt flats. This was due to an accidental suspension by Union Salinera.

"We are working together between all the technicians from the Agency and the Delegation, fundamentally in the control over the censuses, and affectation to reach the last stretch of nesting period to avoid any possible effects on species that remain in lagoons even with water. We are also looking for the best and most viable technical solution to maintain the ecosystem's conditions, since once the inflows of seawater and salt activity are restored, birds will return to prove that the ecosystem is not lost," he said. They have made a statement transferring the birds from the Andalusian Administration on Saturday.

He also stated that this will provide the optimal water levels in the wetland, which, precisely, was created with the salt extraction. This, therefore, demands that there be a sustainable balance."

They say that this is why the Directorate of the Park and the technicians from the Delegation started the process from the beginning. The company had communicated the problem with the salt flats on June 7th, and they issued the favorable reports within 48 hours. This allowed them to take the emergency steps necessary to restore normal salt activity in the salt flats.

Tejero stressed that it was important to "act as quickly at a technical level and at all levels, taking account of the difficulty involved, since it is a privately owned farm and activity. This forces us to ask the company analysis and the taking urgent and emergency actions required for the normal reestablishment at optimal levels of seawater.

Lucia Tejero stated that the work of the technical experts was crucial in order to preserve the salted flats' biodiversity and to restore the ecosystem. This is because migratory birds have been drawn to this area by its environmental richness. She emphasized the importance of "trusting both the Territorial Delegation's and Agency's work, as well the experts who are looking for solutions to the problem."

‹ ›
Keywords:
DirectoraParqueNaturalCaboGataAseguraActuaMaximaCeleridadPosible
Your comment has been forwarded to the administrator for approval.×
Warning! Will constitute a criminal offense, illegal, threatening, offensive, insulting and swearing, derogatory, defamatory, vulgar, pornographic, indecent, personality rights, damaging or similar nature in the nature of all kinds of financial content, legal, criminal and administrative responsibility for the content of the sender member / members are belong.
Related News