Black day at RATP on Thursday, the strike elsewhere risks being little followed

Only fully automated lines 1 and 14 will run normally, but with a "risk of saturation". 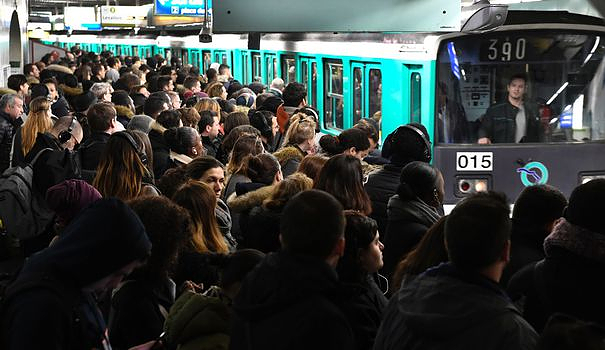 Only fully automated lines 1 and 14 will run normally, but with a "risk of saturation". Five lines will be completely closed (2, 8, 10, 11 and 12), the others only running at peak times, with a severely degraded service.

The RATP invites all those who can to stay at home by teleworking. The situation will not be better on the RER A where one in three trains will run on average. On the RER B, the frequency will be every other train.

At the SNCF on the other hand, the movement supported by the only CGT-Cheminots promises to be much less followed. Traffic will be normal on the TGVs and slightly disrupted on the Intercités, on the eve of a long weekend.

On the TER lines, nine out of ten trains will run on average and, in Ile-de-France, some disruptions are to be expected on certain Transilien lines.

All the unions (CGT, FO, Unsa, Solidaires) of the RATP have long called for mobilization to demand wage increases and improved working conditions.

- Pensions in the background -

The RATP, like other companies in the transport sector, suffers from chronic understaffing due to recruitment difficulties and is experiencing an explosion in absenteeism, particularly on its bus network.

Human resources will be "the first subject on the table" after taking office, insisted Jean Castex during his hearing on Tuesday before the Senate. He promised the opening of negotiations on wages "as of December 2022, that is to say tomorrow".

RATP agents have benefited from an average increase of 5.2% in remuneration this year, according to management.

Another reason for mobilization: the future pension reform with a possible postponement of the legal retirement age and the end of special schemes, says a source close to management.

It is a question of "showing that if we want to mobilize, we know how to mobilize", said Frédéric Souillot, secretary general of FO, on Wednesday, drawing a parallel with the day of September 13, 2019 which had preceded the great mobilization against the pension reform. of winter 2019-2020.

Mr. Souillot must go to the side of the RATP strikers at 9:30 a.m. FO, the second union of the board, is the majority among metro drivers.

On the other hand, he will not participate in the demonstration which will start at the beginning of the afternoon of République, direction Opéra, which is part of a day of national and interprofessional mobilization at the call of the only CGT decided recently .

FO, which had joined the mobilization day of October 18, at the height of the movement in the refineries, to protest against the requisitions, chose this time not to join the CGT, as well as FSU and Solidarity.

The previous day at the call of the CGT alone, October 27, in the middle of school holidays, had little mobilized: the police had identified 14,000 demonstrators in the provinces and 1,360 in Paris. The CGT had not given a figure.

On Wednesday, Frédéric Souillot castigated the multiplication of "leapfrog" demonstration days, believing that this strategy "not only is it counterproductive, secondly it does little to move things, thirdly it wears out the troops".

Questioned by AFP on Monday, the confederal secretary of the CGT Céline Verzeletti was confident, saying to expect "150 to 200" places of demonstration and a mobilization at least equivalent to that of October 18. There were then 107,000 demonstrators according to the police (300,000 according to the union).

The secretary general of the CGT, Philippe Martinez, will not be in Paris, having chosen to parade in Nîmes where he is traveling as part of the professional elections in the public service.