These days are already being lived in La Mojonera, which includes the previous activities, a month-long celebration of San Pedro, the patron saint. 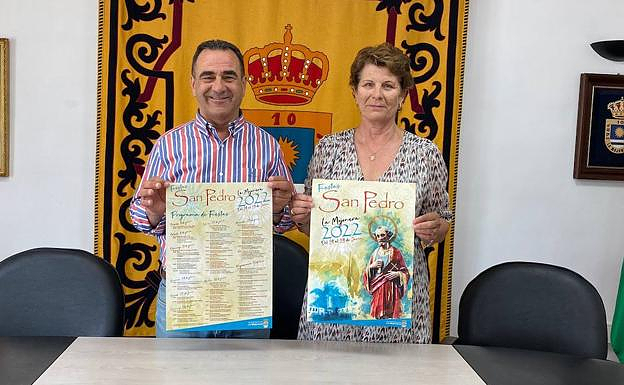 These days are already being lived in La Mojonera, which includes the previous activities, a month-long celebration of San Pedro, the patron saint. Some celebrations that were suspended in 2020 are being reinstated in 2021, in a highly controlled format.

Jose Miguel Hernandez, the mayor, presented yesterday the official poster to announce the festivities. The celebrations will take place from June 24 through 29 and will include a variety of activities, concerts, and entertainment for all ages, including the Diver Show Prix.

The month's festivities began with a paella contest and the traditional pilgrimage to the Virgin of Fatima. This mayor appreciated the response and described the festivities as "special". "This year, we finally recover some normality. We will celebrate with great enthusiasm and excitement a few days in relaxation and coexistence between all the residents and all those who wish to join us.

The official festival program will start on June 24, when the lights are turned on. This will also be the night that the first edition La Mojonera Sports Gala takes place. In which the clubs and athletes who have excelled in their work will be honored.

The program will feature the first two concerts free of charge, Negocios rock and Pedra Tributo a Extremoduro. Sunday will see the Diver Show Prix, an entertaining competition where teams of friends, neighbors and acquaintances face off. The Fito Tribute concert also will take place

On Monday DJ Raul Vazko performs, and the coronation will take place with Laura Gallego, copla singer. The day will conclude with a parade of floats and a festival. There will also be a concert by Antonito Molinaro. The festivities will conclude with a day devoted to religious acts. There will be mass at 12:20 and a procession starting at 8:30. At night, the El Norte orchestra will perform and fireworks.

‹ ›
Keywords:
LauraGallegoAntonitoMolinaConciertosFiestasPedroMojonera
Your comment has been forwarded to the administrator for approval.×
Warning! Will constitute a criminal offense, illegal, threatening, offensive, insulting and swearing, derogatory, defamatory, vulgar, pornographic, indecent, personality rights, damaging or similar nature in the nature of all kinds of financial content, legal, criminal and administrative responsibility for the content of the sender member / members are belong.
Related News