Andalusia is committed to the rehabilitation of Palacio de Los Enriquez

Jesus Fernandez (candidate for Andalusia in the Andalusian parliament) visited Baza to present some of his electoral programs for Baza ahead of the next Sunday's regional elections. 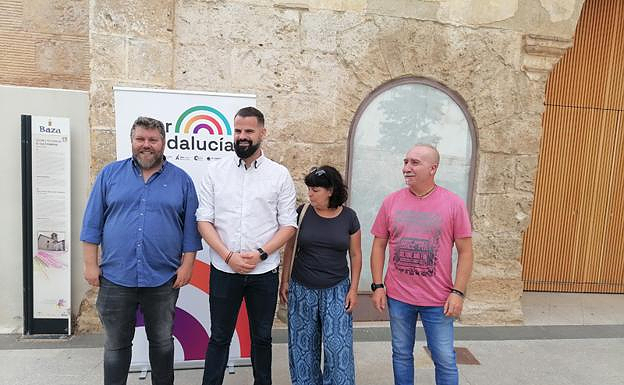 Jesus Fernandez (candidate for Andalusia in the Andalusian parliament) visited Baza to present some of his electoral programs for Baza ahead of the next Sunday's regional elections. Fernandez says that Por Andalucia is "in the face a obsolete model and neglect of Juanma Moreno", and promotes actions that "invigorate local economy, heritage and culture, and ultimately the entire region of Baza", just as they did when Izquierda Unida was part of the Andalusian Government, and projects like the church of San Jeronimo.

He placed the action of PP in respect to assets like the Palacio de Los Enriquez. This is something that must also be valued and reactivated because it is a privileged setting. They will then proceed to draft the project to recover this "patrimonial gem", which can be around 500,000 Euros, which is something that isn't usually within the reach for municipalities.

Fernandez said that the Baza Hospital should be considered a model for the region's health. It must also be an example of excellence in terms of staffing. Fernandez explained that there cannot be a shortage of medical specialists and that all patients can be seen in one place. Fernandez spoke out about the Hospital and how it was necessary to strengthen public transport in the Baza area.

He also proposed making schooling public and free for students 0-3 years old. This was in favor of conciliation, and is an important stage in education when it comes "detecting the needs and deficiencies" of the student body.

Fernandez spoke about guaranteeing public services, and attending to assets. He also spoke out against subsidizing Andalusia's great fortunes. Juanma Moreno has done this in this legislature under the pretense of a demeaning tax reduction for the middle-class and the decline in tax collection on the wealthy. To which was added the money they have not spent in the midst the pandemic. This has resulted in a significant increase in unemployment and layoffs of teachers and health workers.

Juan Ramon Gil, Ma Jose Sanchez, and Juan Pedro Jimenez accompanied the candidate for the Andalusian parliament from the Por Andalucia alliance. They were integrated into positions 9-11 on the 19-J.

‹ ›
Keywords:
AndalucíaComprometeImpulsarProyectoRehabilitacionPalacioEnriquez
Your comment has been forwarded to the administrator for approval.×
Warning! Will constitute a criminal offense, illegal, threatening, offensive, insulting and swearing, derogatory, defamatory, vulgar, pornographic, indecent, personality rights, damaging or similar nature in the nature of all kinds of financial content, legal, criminal and administrative responsibility for the content of the sender member / members are belong.
Related News