"And besides, I would wish for emptier freeways"

Berthold Huber does not receive in his usual office. 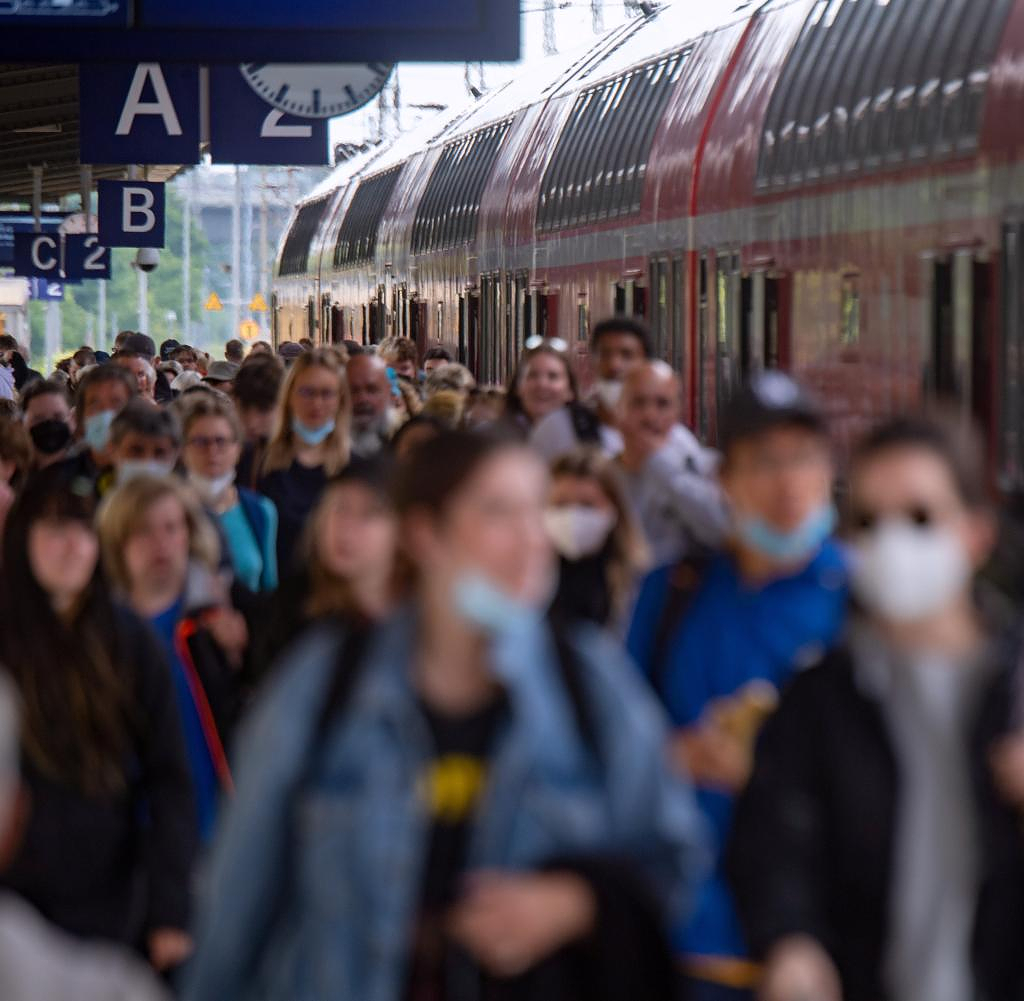 Berthold Huber does not receive in his usual office. The Deutsche Bahn Tower at Potsdamer Platz in Berlin is currently being renovated. The board of directors of the state-owned company works a few meters away in the Sony Center. There, too, a "revitalization" of the building is in progress. Huber is familiar with construction sites, he is responsible for the railway network. This is also in dire need of a revival.

WORLD: Mr. Huber, in December the first train will run on the new line between Wendlingen and Ulm. The project cost almost four billion euros and will reduce travel time by 15 minutes. Is it worth it?

Berthold Huber: Yes. You shouldn't convert that into minutes per billion, but you have to remember that Wendlingen-Ulm is an indispensable part of an emerging network. The 15 minutes make it possible to get earlier connections at major transfer stations. And the 15 minutes will become 30 minutes when Stuttgart 21 is finished. This has a positive effect on better connections far into the regions and will bring more passengers to the train.

WORLD: If you miss the connections because of delays, even 15 or 30 minutes are of no use. Wouldn't it be more important to restore functioning operation in the existing network first?

Huber: I understand the idea. Punctuality is unacceptable this year and infrastructure is causing a large part of this problem. Nevertheless, maintenance and new construction must be considered together. The top priority must be the renovation and capacity expansion of the structurally outdated network, whose susceptibility to failure is increasing. There is the problem that we have too little network for too much traffic. Since the railway reform, passenger traffic has increased by 40 percent and freight traffic by 80 percent, but at the same time the network has become smaller.

WORLD: Customers experience this primarily as delays and train cancellations, which are more the rule than the exception. How long will this go on?

Huber: We want to create the conditions on the Internet for the current punctuality rate to increase from an average of well under 70 percent to noticeably over 70 percent. We are planning various individual measures for this, but the structural problem behind the unpunctuality can only be solved through structural measures: We have a renovation backlog of 50 billion euros. The infrastructure forgives for a long time, but now the point has been reached where it is no longer possible and the situation threatens to tip over.

Huber: From the customer's perspective, we're close. In addition, more and more trains are traveling on the network and the susceptibility to traffic jams is increasing. The additional demand for infrastructure, which is actually good news, is part of the problem.

WORLD: In regional transport, the demand for the 49-euro ticket continues to increase. Is the network prepared?

Huber: There is no space for additional trains in regional traffic around the major junction stations. You can no longer make a quarter-hour cycle out of a half-hour. The infrastructure is dense. One would have to try to solve the increased demand in the short term by providing more seats on trains, but here too there are limits. In the long run, it is not possible without additional capacity on the infrastructure.

WORLD: What is the reason for the renovation backlog? on the money? Or also in the capacities of the construction industry?

Huber: So far, the construction industry and the railways have faced a dilemma. The construction industry has not built up any additional capacities because we have not made the necessary funds available in the long term. And we didn't commission any additional services because the industry couldn't build that much in the short term. The classic chicken and egg problem. This has to end and I've decided to be the hen.

Huber: No, but a hen that provides calculable additional money for everyone involved. That's why we decided to plan significantly more funds for 2023 than the federal budget provides for, even if this amount has a negative impact on Deutsche Bahn's economic result.

WORLD: And when should the backlog be caught up?

Huber: We are now starting to rehabilitate the important and heavily used routes. This means that these important routes will work much better for years to come and we will be without roadworks there for years to come. In 2024 we will start the connection between Frankfurt and Mannheim. In doing so, we not only repair what is worn out, but also renew what could perhaps last longer, while at the same time increasing the capacity of the route. And that benefits passengers throughout the network, because 20 percent of all long-distance trains run here alone and disruptions radiate from here to the whole of Germany.

WORLD: The new line between Wendlingen and Ulm is part of Stuttgart 21, when will this major project be finally finished?

Huber: Stuttgart 21 in its planned form will go into operation at the end of 2025.

WORLD: Would you plan something like Stuttgart 21 again today?

Huber: When Stuttgart 21 is finished, nobody will want to go back to the old way. Not only will we have built one of the most beautiful train stations of all, but with it we will create an important prerequisite for being able to run the Germany cycle, i.e. to connect the large metropolises every half hour.

WORLD: Are such projects still conceivable in the future if the renovation of the network is now a priority?

Huber: The coalition agreement sets a clear goal: we want to double the number of passengers in passenger transport and increase the market share of rail freight transport to 25 percent. This determines how many railways we want to have. In order to achieve this, we need both: the renovation and expansion of the existing network as well as new construction. Therefore we will have to keep building new infrastructure.

WORLD: How satisfied are you with the implementation of the coalition agreement?

Huber: I was pleased about the latest decisions in the federal budget for the railways. That was a positive signal. Together with the Federal Minister of Transport, we are currently in the process of working out intensively how the necessary measures to upgrade the infrastructure can be financed. The federal government has to shoulder many problems at the same time: we have two years of corona pandemic behind us, there is the Ukraine war with skyrocketing energy prices and high inflation. That's why I understand that you have to think carefully about how to do it all together.

WORLD: Does the train have to wait in view of the many problems?

Huber: It has never been so clear how important the railway is for people's services of general interest: it kept traffic going during Corona, it brought thousands of war refugees from Ukraine to Germany, it ensures the transport of energy and food and takes on tasks from inland navigation because the water levels have dropped due to severe drought as a result of climate change. That must be reason enough to put the rail infrastructure in a condition to be able to do all this over the long term.

WORLD: But the energy price brakes gobble up billions.

Huber: It is understandable that citizens should be relieved of the ever-increasing costs. But we have to be careful that the relationship between consumer support and necessary investments does not get out of balance. It's always said: We can't incur any additional debt now because it will be at the expense of the next generation. Which burden for the next generation is greater? Spending money now for necessary and future-oriented infrastructure or having to say to the next generation: We let it break, will you build it again? I have a crystal clear opinion on that.

WORLD: So does Germany also need a special fund for the railways?

Huber: Together with politicians, we have to find a way to finance railway infrastructure in a way that can be calculated in the long term. Services of general interest have the property of prioritizing quantities over price. If you need a hundred new points, but inflation eats away ten of them, we can't simply say that we'll just install 90 new points. Then you either have to find a way to finance the additional ten points anyway, or make the conscious and transparent decision that you want fewer railways.

WORLD: Or you drive on wear and tear.

Huber: That's not possible. We pay for the maintenance of the network from the train-path income that we receive. For regional traffic, for example, train-path revenue may only increase by a maximum of 1.8 percent per year. Everyone knows that this will not offset current inflation. What should we do now? Less maintenance, and that in the current state? That's impossible. So we have to raise the money from ongoing business, and the economic result is correspondingly lower. In 2023 we will repair everything that needs to be repaired. Point. And we don't check whether we still have the last switch in the budget, but rather we install it.

WORLD: But that also means that the loss of the entire Deutsche Bahn group will be even higher?

Huber: We will certainly end this year with a positive result for DB AG, but the additional effort to maintain and modernize the infrastructure will weigh on the result in the coming year. That's so. In the long run, however, this is the right decision.

WORLD: Which railway project the size of Stuttgart 21 would you like to realize for the next generation?

Huber: I would like to see that we have created the infrastructure conditions to be able to run a continuous half-hourly service between the major cities of the republic. A nationwide S-Bahn, so to speak. And I would also like to see emptier motorways, because then a large part of freight traffic would be shifted from road to rail. That would be my dream. If everyone really wants that, it could be a reality by 2040.

About the person: Berthold Huber has had what is probably the toughest job at Deutsche Bahn since July: The 59-year-old is on the board of the state-owned company and is responsible for the renovation of the infrastructure, in which far too little has been invested in recent years. He took over the post from CDU man Ronald Pofalla. Previously, Huber was responsible for passenger transport on the board. Now he is working on one of the main causes of the many delays this year. The political scientist came to Deutsche Bahn in 1997, where he rose from the regional management of DB Regio Bayern to the group board. Huber is married and has four children.

‹ ›
Keywords:
VetterPhilippKamannMatthiasWelt Am SonntagDeutsche BahnSchienenverkehrLageTexttospeech
Your comment has been forwarded to the administrator for approval.×
Warning! Will constitute a criminal offense, illegal, threatening, offensive, insulting and swearing, derogatory, defamatory, vulgar, pornographic, indecent, personality rights, damaging or similar nature in the nature of all kinds of financial content, legal, criminal and administrative responsibility for the content of the sender member / members are belong.
Related News