After repairs, successful ground test for NASA's rocket to the Moon

"All of the goals we set have been met," said Charlie Blackwell-Thompson, launch director for the Artemis 1 mission, which is to be the first in the program to return Americans to the Moon. 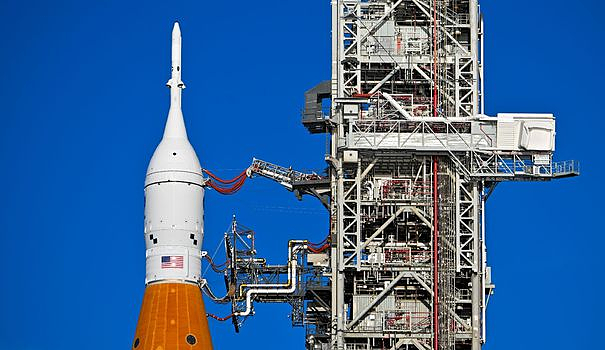 "All of the goals we set have been met," said Charlie Blackwell-Thompson, launch director for the Artemis 1 mission, which is to be the first in the program to return Americans to the Moon.

At the very beginning of September, the launch of the SLS rocket, the most powerful ever built, had to be canceled at the last minute because of a leak observed when filling its tanks with cryogenic fuel -- oxygen and liquid hydrogen.

Hydrogen being highly flammable, these leaks must be avoided at all costs.

NASA has since carried out repairs, replacing a seal at the connection between the rocket and the large pipes feeding it fuel. This seal had obviously been damaged by debris of unknown origin.

A slight hydrogen leak was once again observed during the operations, but it was able to be checked by the NASA teams.

Last week, the agency said it was targeting Tuesday, September 27 for the next take-off attempt, in less than a week. A fallback date, October 2, has also been announced.

"Teams will evaluate test data, along with weather and other factors, before confirming readiness for the next launch opportunity," NASA said in a blog post.

Asked about the question, Charlie Blackwell-Thompson did not want to come forward, but nevertheless said she was "very encouraged" by the course of the test on Wednesday.

For the September 27 date to be met, NASA also needs to obtain a waiver from the United States Space Force concerning the life of the batteries of the rocket's emergency self-destruct system, designed to detonate it in case of a deviating trajectory after take-off.

This duration was normally limited to 25 days, but the rocket has been on its launch pad for much longer.

Additionally, the path of Hurricane Fiona off Florida is being closely monitored.