"We are demonstrating today for girls who have been expelled," rally organizer Zholia Parsi told AFP after it was dispersed by Taliban forces. 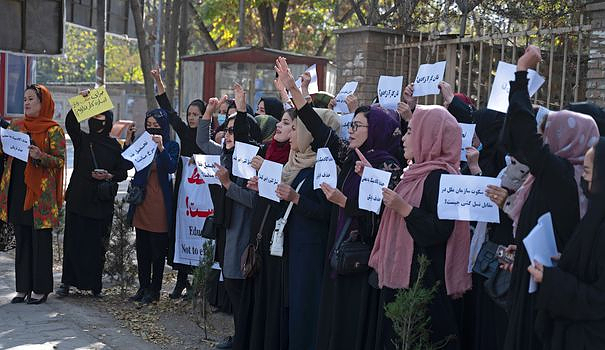 "We are demonstrating today for girls who have been expelled," rally organizer Zholia Parsi told AFP after it was dispersed by Taliban forces.

The protesters also called for the reopening of secondary schools for girls, which have been closed since the Taliban returned to power last year.

Sporadic demonstrations by women have already taken place against the severe restrictions imposed by the new Islamist power. These gatherings are usually quickly dispersed, sometimes brutally, and journalists are increasingly prevented from covering them.

"Don't expel us. Teaching is our red line," protesters protested outside the university.

The Ministry of Higher Education said on Monday that students "who had violated the rules of the residence hall" had been evicted from their accommodation, without specifying how many or whether they were women.

Under pressure from the international community over girls' education, Taliban leaders said the closure of secondary schools was temporary, while advancing a series of excuses such as lack of funds or the time needed to review curricula in accordance with Islamic precepts.

On Monday evening, Taliban Supreme Leader Hibatullah Akhundzada replaced the Minister of Higher Education with a loyal cleric, Neda Mohammad Nadeem, according to a government statement.

The latter, previously governor of Kabul province, had for years high responsibilities in the Taliban apparatus, of which he was the intelligence chief for eastern Afghanistan.

His personal views on girls' education are not known, and the reasons for the departure of his predecessor, Abdul Baqi Haqqani, remain unclear.

"He was considered trustworthy for a key position given his closeness to the Supreme Leader and his achievements," a Taliban official who has worked closely with the new minister told AFP on condition of anonymity. .

This is the second reshuffle in this sector in a month, after the appointment in September of a new Minister of Education, in charge of primary and secondary education.