The participants and neighbors of the cultural association "Cabo de Gata me Mata" had no doubts about the symbolic human chain to fill Las Salinas del Cabo de Gata. 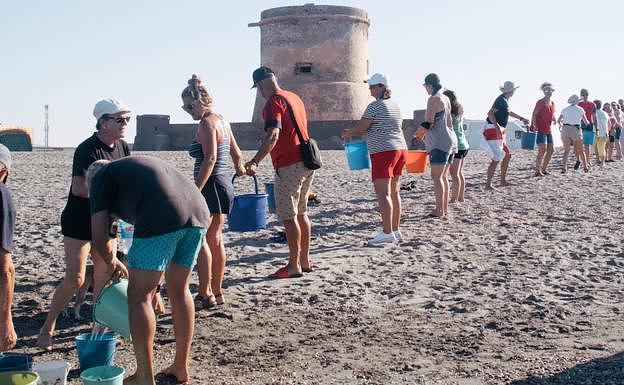 The participants and neighbors of the cultural association "Cabo de Gata me Mata" had no doubts about the symbolic human chain to fill Las Salinas del Cabo de Gata. This area suffered a canal rupture in May. Its wetlands are also disappearing. This was done to show solidarity and help this area that is experiencing significant desiccation.

Around 500 people protested the loss of power channel at half past nine on Saturday. This claim is in response to the "inaction” of the Junta de Andalucia, and the Union Salinera, which exploits the land. It's a result of the drying up the ponds that "are habitat for migratory birds", but they "find that there are no puddles to fuel," as the association revealed.

"Why is it? It's for Las Salinas. I travel from Madrid every year, and it is sad that this has happened. Nobody does anything," Maria said, approaching them attracted to what they were doing. She didn't hesitate to grab a bucket to join the line and contribute her grain of sand to the participants immediately afterward.

They have been transporting seawater for a few hours from the Torreon de San Miguel into the protected area of Las Salinas de Cabo de Gata. The protests are not over. Tomorrow, Sunday, 'Cabo de Gata Kills Me' will call for bathers between Cabo de Gata, Las Salinas, and "to go out onto the road at 1:00 pm to claim with an human chain that a system be put in place, at minimum provisional, from the sea to salt flats", as it is "a place of great ecological and tourist importance".

They are also using the Change.org platform to voice their concern and demand "urgent actions" to save Las Salinas.

The Junta de Andalucia sent a letter to Union Salinera SL belonging to Salins, giving them three days to "put on record" emergency measures to restore sea water supply to the protected wetland. Raquel Espin, territorial delegate for Sustainable Development, urges the company to implement "immediately" provisional measures in order to achieve the final solution before the blinding. .

Espin insists that targeted actions be taken to restore "as soon possible the normality of the artificial lagoon" in Cabo de Gata-Nijar's natural park. It is included in the Ramsar list of Wetlands. "We gave Espin three days to present to Sustainable Development Delegation their proposal for extraordinary measures that would guarantee the supply of salt water to restore the habitat and biodiversity. Reflected the Salinas. Aranzazu Martin, acting delegate to the Board in Almeria assured that the Andalusian government has acted with "the utmost speed" on Friday and that a "group" of technicians from the Territorial Delegation are "on the front line" in the event of any action "in situ '>>.

Almeria's group has claimed that despite being warned by the Territorial Delegation for Sustainable Development that it would provide an urgent solution to the blinding channel that supplies the wetland in three days, there is no doubt that they believe that nothing can be done. They also demand that neighbors not "stay still" in the face what they call an "environmental catastrophe."

The Prosecutor's Office was informed by the environmental group "Amigos del Parque" about the situation at Las Salinas de Cabo de Gata. They are located in zone A1 under protection in Natural Resources Plan Cabo de Gata–Nijar.

‹ ›
Keywords:
CadenaHumanaLlevaAguaCubosHumedalSecoSalinas
Your comment has been forwarded to the administrator for approval.×
Warning! Will constitute a criminal offense, illegal, threatening, offensive, insulting and swearing, derogatory, defamatory, vulgar, pornographic, indecent, personality rights, damaging or similar nature in the nature of all kinds of financial content, legal, criminal and administrative responsibility for the content of the sender member / members are belong.
Related News