Fivety residents of Churriana de la Vega demonstrated this morning to demand that buses be restored to their frequency. 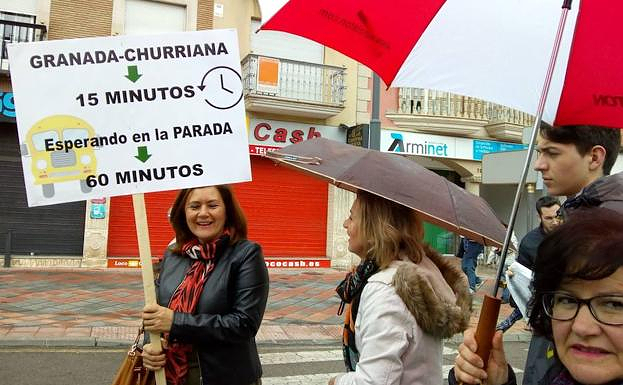 Fivety residents of Churriana de la Vega demonstrated this morning to demand that buses be restored to their frequency. San Ramon street users sometimes have to wait as long as 60 minutes before they can catch the bus to Grenada.

Participants in the protest left the Armilla de Miguel de los Rios metro station at around 11:20 a.m. They then traveled through the Armilla municipality-Real, Jardines, and Santa Lucia streets- to reach Churriana de la Veda where they intended to end in the Plaza de las Palmeras. During the march, slogans like "we won't stop until we get it" or "every fifteen minutes a bus" were chanted.

The mayor of Churriana de la Vega Antonio Narvaez (PP) was at the forefront of the demonstration. He explained to IDEAL the problem that has arisen since January 2, when the line 156 which runs through the middle of the municipality, stopped providing service. The mayor stated that line 150, the bus that travels from Cullar Vega to Churriana de la Vega, should be joined by line 156. This would solve the entire problem in that section. The mayor stated that the 150 line has a frequency of ten trips one-way and ten back to Granada, Cullar. This would resolve the current situation.

Narvaez highlighted however that line 153 has made "a significant improvement", as it passes through the road and serves an area of the town it didn't previously serve. There are 16 outbound frequencies from Granada, 16 from Churriana and 16 from Hijar every day, from Monday through Sunday.

Despite this being a significant improvement, some users may have to wait as long as 60 minutes for a bus to arrive at their stop. "Before, we had a frequency between 20 and 25 minutes. Now, they have a frequency of 25, but they're not real. The bus times are so tight that they sometimes become 30 minutes. And when shift changes occur, especially in the afternoon and at noon, there's an interval of one hour in which there is no bus service," stated the mayor.

The City Council of Churriana must agree to lift traffic restrictions. We know that this is possible. What does this mean? Narvaez adds that it means that the 150 bus, which runs from Cullar to Churriana, is currently not able to transport Churriana residents. This means that even though the bus passes right in front of their houses, it cannot go where they want.

‹ ›
Keywords:
ChurrianaVegaMedioMunicipioCentenarVecinosExigenAutobusesRecupereFrecuencia
Your comment has been forwarded to the administrator for approval.×
Warning! Will constitute a criminal offense, illegal, threatening, offensive, insulting and swearing, derogatory, defamatory, vulgar, pornographic, indecent, personality rights, damaging or similar nature in the nature of all kinds of financial content, legal, criminal and administrative responsibility for the content of the sender member / members are belong.
Related News