Treasures of the museums of the province : Montpellier, city of painters

This is one of the most important cultural institutions in the regional, which opens virtually today. Michel Hilaire, the director, invites the user to browse i 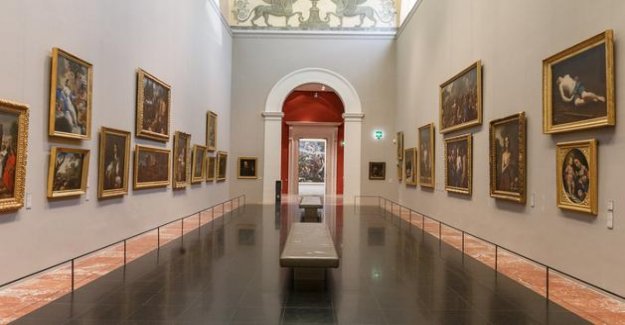 This is one of the most important cultural institutions in the regional, which opens virtually today. Michel Hilaire, the director, invites the user to browse in his company, sub-soils is at its highest level. Where, in two large rooms, a nice white light magnifies a exceptional collection of twenty "Black," Soulages. This is just the culmination of one of the permanent funds to paint the most provided and well-balanced of France.

And it is first of all to the artist who gave it its name to the Musée Fabre in Montpellier will celebrate, this Thursday at 18 hours during a video-tour of a half-hour, free of charge and accessible at will, broadcast in partnership with Le Figaro, Facebook France, the network CLICK.France's digital initiatives, in museums and in the magazine connaissance des arts.

Student of the studio of David, among the best with Girodet, his main rival, the Grand Prix de Rome in 1787, François-Xavier Fabre (1766-1837) is dreamed in the pantheon of the "grand genre, history painting. His Abel expiring, spectacular male academy dating to 1791, bears this out. The Revolution - and not know-how - the forced to swallow his ambitions. It was eventually an excellent portraitist (see his Canova, a great sculptor represented in 1812) and painter of landscapes, due to lack of command official.

Long exile in the Italian peninsula, it has striven to make the charm of the countryside around Rome and Florence by an approach that is both antiquisante and realistic.

Fabre was also a collector of the most advised (this Italian adoption advised Dominique Vivant Denon for the Louvre to Napoleon), then donor's very generous to his region of the Hérault. Fabre was the forerunner of several great sponsors of the cru, Antoine Valedau, Alfred Bruyas friend of Courbet and Bazille, and, more recently, of Pierre Soulages.

His action is still exemplary in the sense that it has participated has founded the museum of Montpellier, and this with the greatest success. "You can't be an hour to Montpellier without that we tell you about the Fabre Museum on the esplanade" , reported, for example, Stendhal.

Completely modernised in 2007 with its area doubled after four years of work, the location (9 000 m 2 of exposure) is discovered first by its main façade restored. A former college of the Jesuits. A pale stone, a monumental and somewhat austere. And then, almost simultaneously, by a gesture of the contemporary zebra stripes even more sleek Buren. They lead to the lobby.

French art (several of Nicolas Poussin, of Greuze, of Hubert Robert, of David and Géricault, Corot, Millet, Rousseau, Troyon, Fromentin...), Italian (Raphael, Veronese) and nordic (the second French collection of paintings of flemish and Dutch), blossoming from there. With a few Spanish size, Ribera, Zurbaran...

a visit from Arles, Van Gogh and Gauguin had first admired here, before arguing, the Delacroix and Courbet. You dreaming to have their comments on The Bathers painted by the latter. This table is so sulphurous that at the Salon of 1853, where he was presented to Napoleon III had cravaché the buttocks bare of the main character, exclaiming : "Ah ! The beautiful percheron here. "

Courbet, one can still admire here, The Meeting, another highlight of the museum which, in the middle of the Nineteenth century, enshrines the primacy of the artist over his patron.

The museum of Montpellier, it is still a collection of sculptures, decorative arts, drawings, and contemporary art. It is still a succession of magnificent temporary exhibitions, in particular monographs. Despite the Covid-19, the one about the painter Jean Ranc (1674-1735), entitled "A Montpellier to the court of the kings" which was to end on April 26 should not be fully passed through profit and loss. After negotiations with the lenders, including the museum of the Prado in Madrid, it has been extended until Sunday 28 June (the museum is working to re-open in early June). It is also possible to discover virtually on the museefabre.extraart.fr.

Owl, an article on "catalogue".