The family Uderzo auctioned, boards of Asterix for the benefit of health care providers

This is an exceptional sale launched by wife Ada Uderzo and his daughter Sylvie Uderzo a month after the death of the great cartoonist of Asterix. The choice of 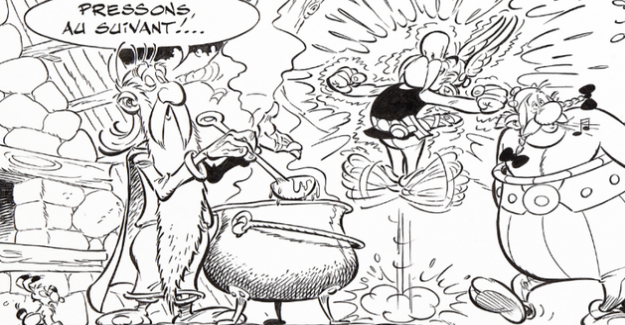 This is an exceptional sale launched by wife Ada Uderzo and his daughter Sylvie Uderzo a month after the death of the great cartoonist of Asterix. The choice of the five original boards signed by his hand is a very good idea, especially when it shows our dear indomitable Gauls take the magic potion : this is a symbolic image which gives the moral in these times of Coronavirus...

Faithful to the memory of Albert Uderzo, who disappeared on march 24, his wife and daughter have wished to join the national tribute to the care staff in French hospitals to offer five original boards on the occasion of a charity auction organized by Artcurial (including the Dassault group, is the majority shareholder) in Paris on 26 may.

" My husband had been very moved by the terrible health crisis as we know it. My daughter Sylvie and I have been holding to support and thank to his memory in the personal caregivers, these new heroes of the village in France ! "

" When Panoramix gives the magic potion in Asterix under the gaze of the chief of the village, one understands that behind this iconic image of the indomitable Gauls ' struggle against the invader, that we are the ones to which he is ", noted the expert of the sale . Artcurial 2020

" My husband had been very moved by the terrible health crisis as we know it. A month after his disappearance, my daughter Sylvie and I have held to do what he would certainly have done : to support and thank to his memory in the personal caregivers, these new heroes of the village in France ! "recalls Ada Uderzo.

There are five boards carried out by Albert Uderzo : three boards of Asterix, a board of Tanguy and Laverdure, and a board of Oumpah-Pah. The expert of this sale surprise Eric Leroy said : "This is an exceptional sale that has not been able to organise on the reports of friendship and trust that Artcurial has a long history with the family Uderzo. Ada and Sylvie have contacted me very naturally in a burst of generosity, completely disinterested. That sounds like Albert Uderzo, by the way. To have known and met several times, it was an extraordinary man, the party of nothing, and who has remained humble all his life, despite the incredible success of Asterix..."

The board of Tanguy and Laverdure is a very rare indian ink, taken from the album Flight of the stork , published in 1964, and pre-published in 1962 in the journal Driver . Artcurial 2020

The three boards of Asterix auctioned are ink of China on paper from the albums The Galley of Obelix, Asterix and Latraviata and The Rose and the sword, estimated between 80.000 and 120.000 €. The board of Tanguy and Laverdure is a very rare indian ink, pencil and blue pencil on paper taken from the album Flight of the storks released in 1964 and pre-published in 1962 in the journal Pilot (estimate: 60.000-100.000 €).

"The estimated total amount of the charity auction in favour of the hospital staff, really indicative, amounts to approximately 500,000 euros," says Eric Leroy, but this could double, or even triple, given the quality of the parts offered. These boards Uderzo represent a bit of a pan of French society. Let's say clearly that these are museum pieces, and this is the opportunity in an exceptional context for the collectors and the other to mobilise in order to make a gesture highly symbolic for the right cause."

" Resist the virus, stay strong and keep morale high, this means this sale. "

Eric Leroy, an expert on sale

"In reality, these boards do not have a price, admits the expert. Everything is symbolic in this sale. Astérix, Obélix, Idéfix, Falbala, Oumpah-Pah, Tanguy and Laverdure... are all of the characters happy, which brighten the spirit. When Panoramix gives the magic potion in Asterix under the gaze of the chief of the village, one understands that behind this iconic image of the indomitable Gauls ' struggle against the invader, it is us whose it is. Resist the virus, stay strong and keep morale high, this means that sale, and beyond that the magnificent gesture of Ada and Sylvie Uderzo."

Under the pen of Albert Uderzo, Oumpah-Pah character becomes cheerful, which restores the morale. Artcurial 2020.

The money collected will be entirely donated to the Foundation Hospitals of Paris-Hospitals of France, which, through its emergency assistance fund Covid19 supports hospitals through the purchase of medical equipment and paramedical caregivers through the delivery of hot meals directly to the place of work or even the support of the various costs (transportation costs, accommodation, child care, as well as patients, through the delivery of digital tablets in hospitals or long-term care facilities to enable them to maintain a link with their families.

"It is for this reason that I hope that this sale will be the occasion to launch an appeal to all collectors of France, but not that," concludes Eric Leroy. I would like to see the great leaders of businesses, or large corporations invest! More the result of the sale, the higher we will be proud to have supported the caregivers."

from the volume 31, Asterix and Latraviata , this plate in excellent condition shows the meeting between Asterix and the beautiful Falbala. Artcurial 2020.The writing you conseilleUn new album of Asterix and Obelix signed Uderzo and Goscinny published in the rentréeAlbert Uderzo: by Toutatis, it's gone!Anne Goscinny: "No, Asterix is not going to die with Albert Uderzo!"SujetsAlbert UderzoArtcurialTanguy and LaverdureAstérix and ObélixOumpah-Pah18 commentairesfafiale 01/05/2020 09:29

wonderful gesture ! are you sure that the the hospital will have the money ???? because we know you give me 10 I should care 9 etc...... because it is the practice of giving .... and yet anyway shame on this government which is nothing but a mafia !

Here is a true and beautiful gesture brave. One can only greet with respect and admiration.
It to look different than the gift of chair, director or bluejean autographed by former starlets décaties of which mention has been made in a previous article

Because they are not paid for these (supposed) health care providers ? What a great fete of the vapidity...