Attacked in libel, Joann Sfar responds to the Society of people of letters

Particularly weakened by the confinement, the authors, often in a precarious situation, torn, whereas the question of the recasting of their social rights, has 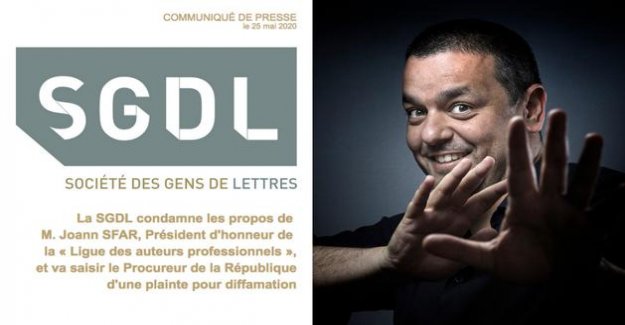 Particularly weakened by the confinement, the authors, often in a precarious situation, torn, whereas the question of the recasting of their social rights, has still not been resolved.

New episode of this fratricidal struggle, the Société des Gens de Lettres (SGDL) announced on Monday that it intends to sue the cartoonist and writer Joann Sfar (The rabbi's cat), honorary president of the League of professional authors, in the courts for defamation.

"The Society of People of Letters, denounces the statements made by Mr. Joann Sfar, honorary president of the League of professional authors, to the antenna of France Inter on may 23, 2020, and indicates that she will file a complaint for defamation before the Prosecutor of the Republic," said the SGDL said in a statement.

"The Society of men of letters speaks to the supply chain book as a whole, or to the publishers. It sometimes occurs in huge amounts of money who do not go to the authors," had said Saturday Joann Sfar in the name of the League of professional authors.

"we Were promised that we would be entitled to aid. But the amounts have been allocated to organisations which would redistribute them to the authors... And that does not redistribute anything. While these organizations sometimes have private hotels in the centre of Paris", had insisted the designer in a clear allusion to the LDMS the seat of which is the Hôtel de Massa, a mansion classified as a historic Monument.

The League of professional authors is a young union of authors born in the wake of the movement of engagement #PayeTonAuteur.

The Society of People of Letters, wakes up to make me a defamation lawsuit. So I should thank and I finally understand the function of this body : it is used to put the authors in the right way.

today, Joann Sfar is to respond to the Société des gens de lettres (SGDL). Here is his statement:

everyone advised me to conceal from me, because it's going to be a trial. Maybe that is what the purpose of this complaint, moreover, that it be silenced.

And we should thank the Society of men of Letters. I was wrong to say that this institution was poorly the authors. It is true, we have not heard from them when we were fighting for that the report Root is not buried. They were also very discreet at the scandal of the Agessa, when it was discovered that our organization of social security had "forgotten" part of the contribution of 190 000 artists-writers, the detaching of their pension rights. But today, as our profession comes out exhausted from years of crisis and several months of an outbreak, they wake up. To shout with me that the way in which the State has decided to manage the crisis for artists-authors is problematic ? No. To request the implementation of measures of support to the authors simple, appropriate, and without rupture of equality, as for other professionals of this country ? No. The Society of People of Letters, wakes up to make me a defamation lawsuit. So I should thank and I finally understand the function of this body : it is used to put the authors in the right way if by chance they happen to be catastrophés, and by the social status of their profession, and by the way paternalistic including associations pretend to defend them.

Nevermind the fact that the release of the LDMS playing BOGGLE with my statements to make me say something other than what I said.

And do not close our big mouth. I do not believe that my statements fall under the defamation. I want to hear that I am vague, inaccurate, and my comments in calling for the debate. But this trial is a shame.

To say the background of my thinking, I can't believe for a moment that the 24 members of the board of directors of the LDMS support this approach. Among them authors, publishers and various stakeholders in the sector book. I can't believe that they validate this attitude is shameful in my eyes. No more that I can't imagine the members of the SGDL favourable to the fact that their contributions be used to attack an author in court because he dares to criticize the current situation.

If I issue this criticism, and if other authors do with me, it is because we see day-to-day colleagues who can only do more, of all ages. We see a system that is closed like a noose around our colleagues. And for years each of our initiatives with the public authorities eventually reduced to nil. The last in date, the report Root, has been torpillée. This report, commissioned by the Ministry of Culture included both a statement just about our situation, and of recommendations that are perfectly sensible for the authors is finally receiving a status more consistent with their activity. Upon its publication, this report has been the object of all attacks emanating from the National Union of Editing, which is not a surprise, but also other organizations that we have been able to understand that their investment from the authors was to work to ensure that nothing changes.

Yes, I said that the LDMS and all the mesh mixing cultural association, trade unions and collecting societies representing us badly. It is a confusion of interests which exists nowhere else in the professional representation of the business. France has committed itself, by ratifying the convention no. 87 of the International Labour Organization on freedom of association and protection of the right to organise convention, to " take all necessary and appropriate measures to ensure that workers and employers may exercise freely the right to organise. "

During the time of abundance, while the world didn't care. Now that the authors need help, I believe it is necessary to consider the reasons for which none of the relays which should help them does not work.

I believe that we can no longer accept the absence of a professional representation of legitimate authors. There are laws in France. We ask a simple thing : the application of social democracy, and the organization of professional elections comply with the labour law. Today, some associations and organizations we represent to office under the pretext of seniority, employ many people, are very richly endowed. We have the right to criticize their action, and even their existence if it sings us.

I happen to be excessive, inaccurate, to err in the numbers ? It is possible.

I happen to be excessive, inaccurate, to err in the numbers ? It is possible. This is probably a naive idea, but to the extent that the State manages to impose tax on the income to the artists-authors and their levy contributions, I don't see why he needs the LDMS to distribute emergency aid to the criteria disconnected with our trades, at the time of one of the greatest economic crises of the century. 1 million euros have been made available to the authors of the book, by State, per 100,000 individuals in France. Rather than the handle itself, the State has delegated this envelope to the Society of men of Letters. Another 1 million extra has been provided by agencies of the management collective. As of may 4, 2020, according to figures from the National Centre of the Book, only 80 authors had had access to this assistance. The authors have made known their distress : this device supposed to be specific is not suited to their situation.

That LDMS be displeased with my words, I can well imagine. They have the feeling that I'm excessive, I will agree gladly. Even if a part of me thinks that he should be screaming even louder since after years to shout themselves hoarse, colleagues and myself are not heard. That they come to me to do a trial, this is according to me the indignity. And it is a shame for an association that claims to be at the service of authors.

I ask solemnly and publicly to the committee's 24 members of the SGDL as well as the members of this association if they agree to let their name be used to this procedure shameful.

Dear LDMS, I'm going to re-read Balzac. I'd like to tear up my membership card, but I don't party. You don't represent not. And if you persist in wanting to attack those who dare to speak unto thee, prepare to ask the state for more funding because one is likely to be many.

Joann Sfar honorary president of the League of Professional Authors."

Actually, it was entirely right to criticize these three bodies many obscure who live on million euros and mainly in mansions hidden at the end of Paris ! The problem in FRANCE, there are layers of agencies, associations of various kinds... which fill the pockets of the directors to all floors with a vocation of titles high-sounding aid of this, and this ! These structures are duplicates with others ! It is necessary to stop these things and focus the money otherwise ! Evidence a few months ago, an organization ADSPL has been created and impossible to know what it does exactly, I was told off when I wanted information so that we paid a levy on wages !