War in Ukraine: UN Secretary General to meet with Zelensky and Erdogan

In his speech on Wednesday evening, the Ukrainian president said that his country's diplomatic efforts were continuing in order to obtain financial and material aid and that Russia be punished more harshly. 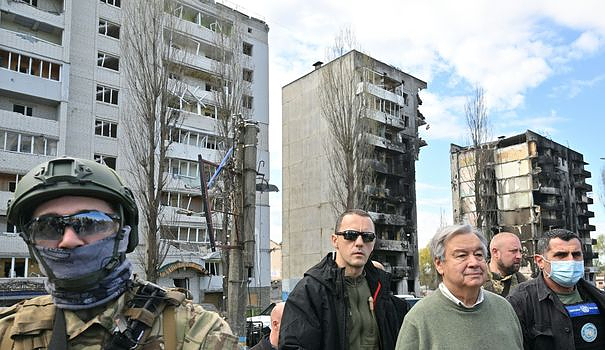 In his speech on Wednesday evening, the Ukrainian president said that his country's diplomatic efforts were continuing in order to obtain financial and material aid and that Russia be punished more harshly. He notably mentioned the holding of a ceremony where the new ambassadors of Belgium, Spain, Romania and Kyrgyzstan were gathered.

United Nations Secretary-General Antonio Guterres will meet Ukrainian Presidents Volodymyr Zelensky and Turkish President Recep Tayyip Erdogan in Lviv, western Ukraine, on Thursday, almost six months after its invasion by Russia. The three men will discuss the recent agreement on the export of Ukrainian grain, the tense situation at the Zaporizhia nuclear power plant and "the need for a political solution to this conflict", in the words of the UN spokesman , Stephane Dujarric. Antonio Guterres has also planned to meet one-on-one with Volodymyr Zelensky and to go to Odessa, a port city from which some ships loaded with grain depart.

Although 21 cargo ships have left Ukrainian ports since August 1, the first humanitarian ship, chartered by the UN, only left Ukraine on Tuesday. Loaded with 23,000 tonnes of wheat, it is destined for Ethiopia. According to the World Food Programme, 345 million people in 82 countries face acute food insecurity, while up to 50 million people in 45 countries are at risk of starvation without humanitarian assistance.

On the military ground, the fighting continues and causes new civilian victims, as in Kharkiv, the second city of Ukraine. According to the country's authorities, a Russian missile hit a three-storey residential building on Wednesday, causing "a powerful fire". "At this stage, there are seven dead and seventeen injured," said Igor Terekhov, mayor of Kharkiv. Volodymyr Zelensky had earlier denounced a "despicable and cynical attack".

The situation at the Zaporizhia nuclear power plant remains very tense. Ukraine's interior minister said on Wednesday that Ukraine must be prepared "for all scenarios". "No one could foresee that Russian troops were going to fire on nuclear reactors using tanks. It was unheard of," Denys Monastyrsky said during a trip to the city of Zaporizhia. For his part, NATO Secretary General Jens Stoltenberg said it was "urgent" for an "inspection" by the International Atomic Energy Agency (IAEA) to take place at the plant. According to him, the occupation of the site by Russian soldiers "increases the risk of a nuclear accident". On Tuesday, the Ukrainian public operator of nuclear power plants, Energoatom, denounced an "unprecedented" Russian cyberattack against its online site, specifying that its operation had not been disrupted.

The Russian army assured, this Thursday, that it did not deploy "heavy weapons" in and around the Zaporizhia nuclear power plant, "We emphasize that the Russian troops do not have heavy weapons in the compound of plant and surrounding areas. Only security units are there," the Russian Defense Ministry said in a statement.

A statement released on Wednesday said China will participate in joint military exercises with Russia later this month. The goal, according to the Chinese Ministry of Defense, is "to deepen cooperation" between the two armies. China and Russia have close defense ties and Beijing has announced that it wants to take bilateral relations "to a higher level". China assures that its participation in the military exercises is "unrelated to the current situation at the regional and international level".

The American Institute for War Thinking, ISW, noted that part of the pro-Russian militia of the self-proclaimed Luhansk Republic had refused to fight in the other Russian-occupied region of Donbass, the People's Republic from Donetsk. A researcher says, based on a video posted on social networks, that these soldiers believe that "their work is finished" since they reached the borders of Lugansk. According to the ISW, this episode is part of a broader trend of "decrease in investment" by pro-Russian militias. DNR troops had already complained in a similar way in recent months when they were reassigned to the Lugansk and Kherson regions.