While some Arab countries have normalized their relations with Israel, the majority of the population remains committed to the Palestinian cause. 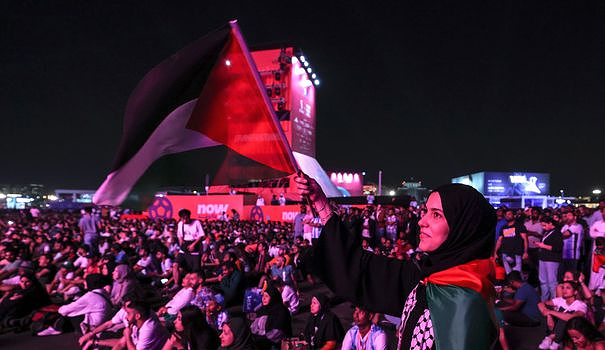 While some Arab countries have normalized their relations with Israel, the majority of the population remains committed to the Palestinian cause. Many fans, mostly Arabs, refuse to speak in front of Israeli cameras, while others chant "long live Palestine" during live broadcasts.

In a video filmed by AFP and viewed more than 5.2 million times on Twitter, a Saudi fan rebukes journalist Moav Vardi of the Kan channel: "There is only Palestine, there is not from Israel... you are not welcome here".

"It's very difficult to work here," Moav Vardi told AFP, but said he understood the anger in the Arab world, scalded by decades of colonization and occupation by Israel of the Palestinian territories, considered illegal by the community. international.

Many Qataris, whose country does not have official relations with Israel, hung Palestinian flags from their car windows.

In the stands, some of them wear armbands with the motifs of the keffiyeh, a symbol of resistance to the Israeli occupation, while Palestinian songs resound in the fan zones of Doha.

"This is a golden opportunity to highlight our cause," rejoices the supporter wearing a Qatar team jersey and a Palestinian flag.

For Souhaib al-Issa, a 16-year-old Jordanian, waving the Palestinian flag is a sign of "peaceful resistance to express our rejection of normalization with a country that occupies Palestine".

Qatar, which is keen to show its support for the Palestinians, did not follow Bahrain and the United Arab Emirates, two Gulf neighbors which normalized relations with Israel in 2020.

An Israeli supporter, who calls himself Haïm, confides that he did not take the flag of his country, a first for this football fan who attended three other editions of the World Cup.

"I feel like I'm watching the World Cup in disguise. The atmosphere is hostile towards us," said the 57-year-old, who also removed the Star of David that usually hangs from his neck.

The Israeli government has advised its nationals not to display Jewish or Israeli "symbols" during the World Cup.

To attend the tournament with his two sons, Haïm took one of the special flights from Ben Gurion airport, operated by a low-cost Cypriot company.

In total, nearly 10,000 Israelis are expected in the Gulf country, according to diplomat Alon Levy, who provides consular services to nationals of the Jewish state during the World Cup.

Fifa has welcomed the unprecedented establishment of direct flights between Tel Aviv and Doha, Qatar having given the green light only on the condition that the Palestinians are authorized to board in the same way as the Israelis.

According to a ticketing representative, no Palestinians have been registered on the first two flights, but some are expected to take the third, scheduled for Tuesday.

The deal has not been discussed with the Palestinian Authority, according to a Palestinian official who requested anonymity. "We heard the news on television," he told AFP.

Most Palestinians usually travel to Doha via Jordan or Egypt, as Israel restricts access to Tel Aviv airport, the official said.

Qatar is home to nearly 250,000 Palestinians out of a total population of nearly three million, mostly made up of expatriates.

Since the start of the World Cup, the country has welcomed many Arab visitors, notably from Saudi Arabia, Tunisia and Morocco, the three teams from the region qualified with the host country.