With "The traffic jam", Lapalisse cultivates his nostalgia for the National 7 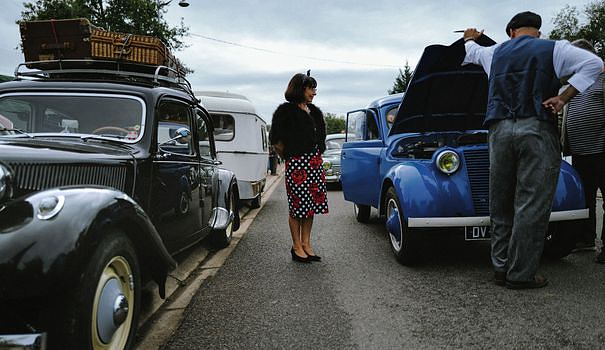 Several hundred old vehicles - R16, DS, "Traction" Citroën, Estafette, Solex... - thus paraded for 30 km around and in the streets of this town in the Allier region, which, until the creation of motorways south in the 1960s, was taken over by holidaymakers. Gigantic traffic jams and obligatory breaks, conducive to conviviality, were then on the menu.

"We took this road, huh! I've been there X times... We had traffic jams. But we didn't care, since we stopped. We let the engine cool down and then, my faith, we were waiting for it to happen. In fact, it was part of our way of life. It's true that we had more time to do things", says, driving his 203 red, Dominique Jacquet, retired and president of the association "Les Vieilles Soupapes de Chantelle" (Allier).

“When we went on vacation with our parents, we drove at the speed we were driving. We got in the car, we were already on vacation …”, adds his wife Valérie, dressed in retro fashion, at his side.

The event, which should attract 25,000 people according to Mayor Jacques de Chabannes, has been organized every two years by the Community of Pays de Lapalisse municipalities since 2006, when a bypass put an end to the congestion of this small town of 4,000 inhabitants.

"It was the era of the post-war boom, Lapalisse was an essential point on the National 7 between Paris and Menton. At the time, it took seven hours to do Paris-Lapalisse" and the city "was truly a tourist stopover with large hotels, bars, restaurants", remembers the chosen one, at the foot of the castle where vehicles and spectators flocked in the boom of the party.

The service stations of course benefited at the time of the "7": "I can say it, the National made me live for decades, must not spit in the soup", says Nicole Cantat, 75 years old , independent owner-operator of a service station, full of anecdotes about the adventures of vacationers.