The food crisis experienced by many countries, particularly on the African continent, could worsen. 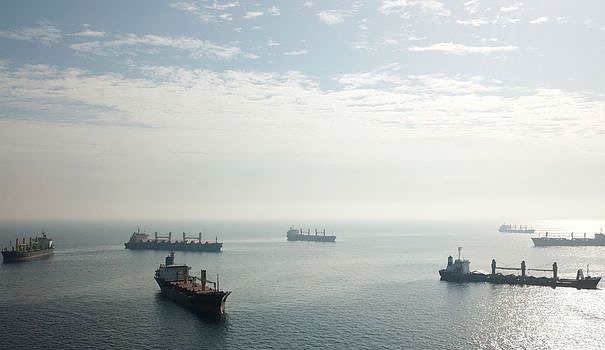 The food crisis experienced by many countries, particularly on the African continent, could worsen. The conflict between Russia and Ukraine has taken a new turn: now, cargo ships loaded with Ukrainian cereals are blocked at the quay. “The grain corridor needs reliable and long-term protection,” Ukrainian President Volodymyr Zelensky reacted on Tuesday evening in his daily address broadcast on social networks. "Russia must clearly understand that it will receive a harsh global response to any measure that disrupts our food exports," he said. "This is literally a vital question for tens of millions of people."

After attacks by marine drones that hit buildings of the Russian military fleet in Sevastopol Bay on Saturday, Russia is asking for security "guarantees" from its fleet on the passage of grain exports. Recep Tayyip Erdogan, using his preserved ties with both Moscow and kyiv to stand as guarantor with the UN of the July agreement on the export of Ukrainian cereals, said he was "confident" about the chances of reach a solution. But the Kremlin dampened these hopes by announcing that the agreement could only resume effect if kyiv presented "real guarantees (...) that the humanitarian corridor will not be used for military purposes". As a result, the Joint Coordination Center, based in Turkey and responsible for the application of the agreement, announced on Tuesday evening the suspension of all cargo movements, this Wednesday, November 2. In unison with Western allies and the United Nations, French President Emmanuel Macron denounced on Tuesday "a unilateral decision by Russia which is once again harming world food security".

In retaliation for strikes on its military buildings, Russia launched a massive wave of cruise missiles on kyiv and the country's civilian infrastructure on Monday. On Saturday, she announced that she was withdrawing from the agreement which allowed the export of millions of tonnes of Ukrainian cereals via the Bosphorus.

Russian occupation authorities in the Kherson region of southern Ukraine announced new evacuations of civilians on Tuesday evening, days after more than 70,000 people left the area the army is closing in on Ukrainian. “I have decided to extend the evacuation zone by 15 kilometers from the Dnieper,” said the governor installed by Moscow in Kherson, Vladimir Saldo, in an address published on Telegram.

“Forced evacuation measures will be applied from November 6 to the remaining people”, can we also read on the account of the administration of Kakhovka, a city affected by these new evacuations. According to Vladimir Saldo, who was speaking to the inhabitants of the Kherson region, a Ukrainian region annexed by Moscow at the end of September, "there is an immediate risk of flooding" of part of the left bank of the Dnieper river facing a potential "massive missile attack on the Kakhovka dam".

In Kyiv on Tuesday and Wednesday, Undersecretary of State for European Affairs Karen Donfried was due to meet with members of the Ukrainian presidency and diplomats, as well as representatives of civil society, according to a press release from the Department of State. Karen Donfried's visit comes amid tensions over Ukrainian grain exports, after Russia suspended its participation in the so-called Black Sea agreement.

It also comes a few days before the mid-term elections in the United States, on November 8, where Democratic President Joe Biden is playing his parliamentary majority. While no one expects a complete reversal of US foreign policy on Ukraine if the Republicans win, their leader, Kevin McCarthy, has nevertheless caused concern in kyiv and among US allies. emphasizing that his party would not sign a "blank check" to Ukraine.

"I believe technology should be used to create, to save and help people, not to destroy," Ukrainian President Volodymyr Zelensky's wife told an audience of entrepreneurs, investors and others digital specialists, gathered for the annual high mass of tech in Europe. She had previously projected images of the damage from Russian missile and drone attacks that caused numerous civilian casualties in several cities across the country, and caused power cuts.

"Russia has put technology at the service of terror. What you see are the consequences of the use of this technology", launched Olena Zelenska, screenwriter by profession, who has participated in person in recent months in several international events. Her husband appeared earlier this year as a hologram at several tech and start-up events, directly calling on companies to help him rebuild his country.

The head of French diplomacy Catherine Colonna and her Chinese counterpart Wang Yi discussed Tuesday, during a phone call, cooperation between the two countries and the conflict in Ukraine, the two parties said. During the meeting, the Chinese minister "said that China and France should jointly plan and design high-level exchanges and cooperation in various fields, so as to open up new prospects for bilateral relations," according to a report. published by the New China agency.

Christine Colonna, for her part, welcomed a "constructive interview" on her Twitter account, assuring that "our bilateral exchanges will intensify". "We must act together to seek to end the Russian escalation in Ukraine and get North Korea to meet its obligations," she added. The report on the Chinese side also indicates that "the two sides exchanged views on Ukraine, the situation on the Korean Peninsula and other issues of common concern", without further details.