The Pope refutes rumors that he is resigning and says he is ill.

Pope Francis doesn't think about moving to the side. 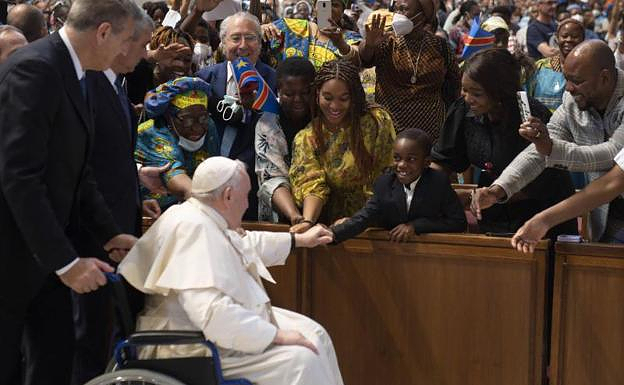 Pope Francis doesn't think about moving to the side. It has never crossed my mind. The Pontiff said that it was not at the moment, denial of any intention to resign, and denial of rumors about his cancer which he calls "court gossip". The Pope said in an interview with Reuters that "when I see that it is impossible for me to do it, I will do so - 'I don’t know when, God shall say' -. This is Pope Benedict's great example. He told the popes to stop at the right time, which was a great thing for the Church. Benedict is a giant.

Franciso wanted to share more information about his knee problems, and the difficulty he has with walking in recent days. He explains that a ligament had become inflamed and caused him to be unable to walk properly, which caused a fracture. "I'm fine. I'm improving slowly and thanks to all of the laser, technotherapy, and magnetotherapy work, technically (the fracture has already calcified) is done. The Pope says that I must now move because there is the risk of losing my muscles if I stop moving.

The medical advice for his knee injury has stopped him from travelling this week to the Democratic Republic of the Congo or South Sudan. He will travel to Canada on July 24-30. He is already planning for future international trips, and is even considering a postponed trip in Africa. "I wanted to travel to Moscow because I believed that, if the Russian president allowed me a small window of opportunity, I would be able to serve the cause for peace. It is possible to go to Ukraine when I return from Canada. To help someone, I first went to Russia. But, I'd like to visit the capitals.

‹ ›
Keywords:
PapaDesmienteRumoresDimisionCancer
Your comment has been forwarded to the administrator for approval.×
Warning! Will constitute a criminal offense, illegal, threatening, offensive, insulting and swearing, derogatory, defamatory, vulgar, pornographic, indecent, personality rights, damaging or similar nature in the nature of all kinds of financial content, legal, criminal and administrative responsibility for the content of the sender member / members are belong.
Related News