Thanks to UNED collaboration, 'La Academia’ provides educational content for the Music Festival.

The 'Ciudad de Ubeda International Music and Dance Festival' is committed to culture from an artistic, educational, and informative perspective. 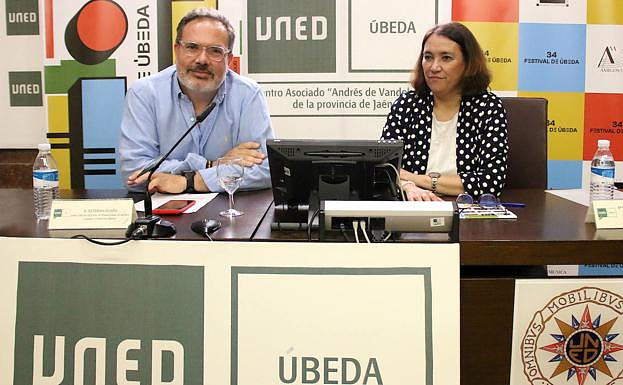 The 'Ciudad de Ubeda International Music and Dance Festival' is committed to culture from an artistic, educational, and informative perspective. It also includes a section called The Academy'. This section was created in collaboration with the Associated Center of the UNED ’Andres de Vandelvira’ in the province of Jaen. The headquarters are in Ubet.

These master classes, conferences, or meetings focus on structural elements associated with academics and pedagogy. They also commemorate musical interest and knowledge. The presentation of the project for the 34th edition was a clear example of this. Maria Luisa Grande (director of the UNED Jaen) and Esteban Ocana (director of the Ubeda festival) were both present. They expressed satisfaction with being able to keep this alliance going for another year. This created an environment that encourages artistic creation from formative perspectives.

Maria Luisa Grande stated that it was an honor for UNED to be part of the musical cycle. The UNED makes its resources and facilities available to students, and also grants participation accreditation. It is because, she stated, the "Ciudad de Ubeda" is a cultural event of reference in the province with projection outside and a loyal audience. This is all thanks to the fact the organization works "a lot" and "very well".

Esteban Ocana, for his part, recalled that "The Academy" was established in 2017 on Esteban's initiative. The Academy is dedicated to continuing to improve the polyhedral tone and the musical cycle by adding a section to training, dissemination, research, and education. He also stressed that all activities, including master classes, are completely free to students of Andalusian conservatories.

This edition will be dedicated to the piano and 'La Academia" will include content about this instrument. Juan Miguel Moreno Calderon (musician and writer) will host a conference on June 16, where he will talk about Rafael Orozco (1946-1996), who is one of the most important pianists our country has ever produced.

Joaquin Achucarro will join the meeting on June 18, where he will review his career and offer a masterclass for those who are registered. He is one of the greatest masters of the instrument and will turn 90 in just a few days. This is a rare opportunity for the festival that also features a concert by the maestro on the previous day.

The Academy's last activity will feature the star of the Costa Rican, and also one of the best trumpeters today. It will be a masterclass for students in the specialty of trumpet at the higher conservatories in Andalusia. The event will be held on June 26th.

‹ ›
Keywords:
AcademiaAportaContenidoPedagogicoFestivalMúsicaGraciasColaboracionUned
Your comment has been forwarded to the administrator for approval.×
Warning! Will constitute a criminal offense, illegal, threatening, offensive, insulting and swearing, derogatory, defamatory, vulgar, pornographic, indecent, personality rights, damaging or similar nature in the nature of all kinds of financial content, legal, criminal and administrative responsibility for the content of the sender member / members are belong.
Related News