Svitlana Tytova and Tetiana Verjykovska, both arrive from the Russian-occupied town of Berdyansk on the Black Sea coast. 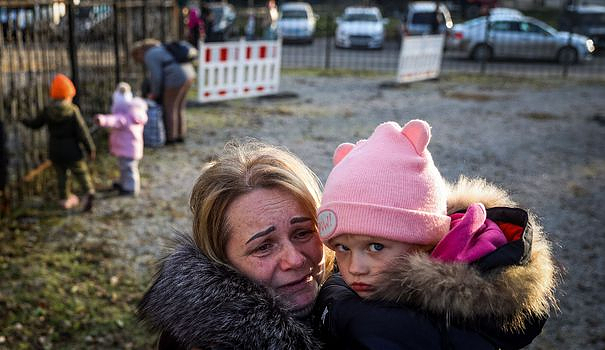 Svitlana Tytova and Tetiana Verjykovska, both arrive from the Russian-occupied town of Berdyansk on the Black Sea coast.

"We fled because eight men armed with automatic rifles entered our house," said the 52-year-old journalist, hugging her granddaughter tightly to her. "They were bringing people together."

Difficult for her to say more.

A few meters further, Tetyana Verjykovska, she savors this moment: "That's freedom!". "I think I can manage now," wants to believe this 29-year-old choreographer.

The psychiatrist Tetiana Chekoï, however, strongly doubts it.

"Each of these people suffer from post-traumatic stress," said the 45-year-old specialist who has helped thousands of displaced Ukrainians since the first fighting in 2014 with Moscow-backed separatists in the east of the country.

According to her, the Russian methods since the invasion of Ukraine launched at the end of February mix psychological intimidation and brainwashing.

Foreign journalists have no possibility of gaining independent access to the occupied areas, and the few who can flee these areas do not take any material memories with them.

Ms. Chekoï and her colleague, Ouliana Ilmane say they observe every day the traces of the psychological tactics used by the Russians in the annexed Ukrainian territories, lifting part of the veil on the living conditions in these areas.

The two women spend their days in a specialized center, near the only checkpoint where Ukrainians can cross the front line in the south.

Only a handful of people cross it each day, with the Kremlin only allowing young mothers and the elderly to leave the annexed areas at the end of September.

For these two psychiatrists, "the Russians see these people as their property" in the regions of Kherson and Zaporijjia. "They try to break them" mentally, "and that scars them psychologically," said Ms. Ilmane.

- Tank gun pointed at a school -

Ms Chekoï claims to have heard that "the Russians ordered a woman to give lessons at the school (after the annexation, editor's note) because she was liked by the students and that could bring them back to class".

"And afterwards, they had a lesson with a tank that was pointing its cannon at the school," she continues.

As a visible reminder that the version of history and warfare taught in school now had to follow official Kremlin doctrine.

According to Ms. Chekoy, the school was even decorated with flags on which was written "On Berlin", a rallying cry of the Soviet army during the Second World War, when Moscow justified its invasion of Ukraine by the need to " save" the Russian-speaking population from a "genocide" carried out by "Nazis" in power.

"The Russians have blocked all (Ukrainian) TV channels and are now broadcasting their own," she describes.

"My friends told me that people who have lived (in these conditions) for two or three weeks have already changed their way of thinking," she says, lamenting that the Russian methods of indoctrination "work".

According to the two psychiatrists, the chronic shortages of basic products and food also contribute to exhausting people in the face of Russian propaganda.

The Russians "have a well-defined action plan," says Ms Chekoi. "At first they destroy the person morally. Then they start to indoctrinate him," she says, pointing to the important role of the lack of food in this country already traumatized by famines in the 1930s and 1940s, to the Soviet era.

Ms. Ilman says she "saw children throwing themselves on food" when they arrived in territories controlled by kyiv.

"Some can't stop eating: they eat, go to the toilet, and come back to eat," adds Ms. Chekoï.

But it is above all the psychological after-effects that worry the two women.

"Many of those who arrive here are lost. They are asked questions and they don't really understand what is being asked of them," she explains.

Before adding, looking concerned: "Some cry and laugh at the same time. These are signs of hysteria, of stress".