"He finds strong and moving words"

In 1813, the Baron von Tettenborn was the first to be made an honorary citizen of Hamburg. 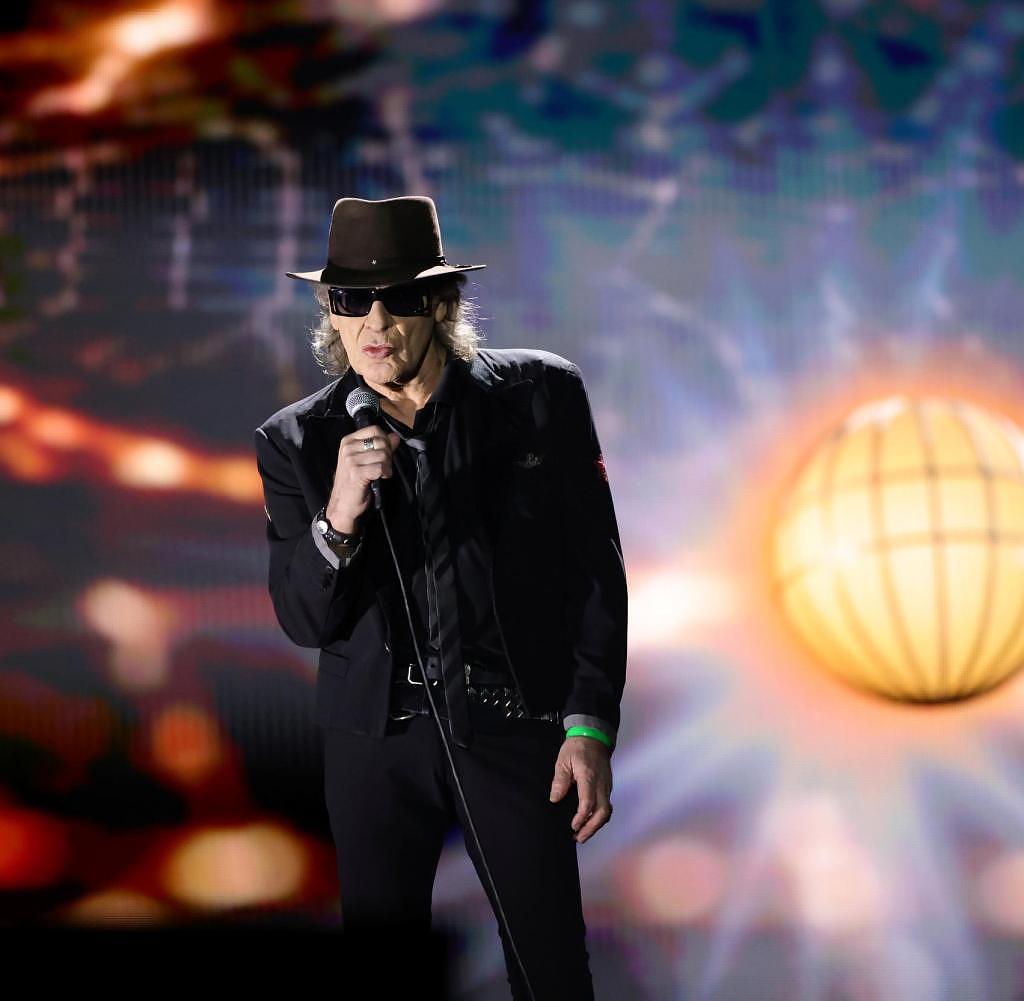 In 1813, the Baron von Tettenborn was the first to be made an honorary citizen of Hamburg. A man pictured only in a uniform and hat, and he has at least that in common with his 37th successor. Udo Lindenberg is simply unthinkable without his hat and his dark robe, but fortunately there is much more to the 76-year-old lyricist, composer and singer who - born in Gronau - moved to Hamburg in 1968 and who has had his for decades has permanent residence in the attic of the Hotel "Atlantic". Before the award of honorary citizenship next Wednesday, WELT AM SONNTAG asked prominent Hamburg residents and close companions to name their Lindenberg favorite song.

Peter Tschentscher (SPD), Mayor of Hamburg: “Udo Lindenberg is one of the most important musicians of our time. His personality and his music have shaped entire generations. Udo Lindenberg has found a home in Hamburg, to which he has been loyal for over 50 years. His songs convey emotions and attitude in concrete situations of life and in the big issues of the time. He finds strong and moving words for humanity, freedom and tolerance and is therefore a special ambassador for Hamburg in the world. With the song 'Reeperbahn', Udo Lindenberg appeals to the attitude to life of the people of Hamburg, who, despite their internationality and great interest in distant places in the world, are always happy to return to the Elbe and enjoy life in Hamburg. The song is Udo Lindenberg's commitment to his hometown and the Hanseatic motto of embracing the world with one's homeland in one's heart."

Kirsten Boie, author of young people's books and honorary citizen of Hamburg: "No one in Hamburg is guaranteed to be happier about our new honorary citizen than I am, except - maybe! – Udo Lindenberg himself. Finally! Actually, we all expected him when I was surprisingly awarded honorary citizenship in December 2019. Certainly there will be a toast to him all over Hamburg on September 7th - I'll just suggest that: All Hamburgers on their balconies, at their windows, at 7.30 p.m. when the certificate is handed over in the town hall? Just try? Not surprisingly, his children's song 'Why are wars there' is the most important of his songs at the moment. I know some people find that kitschy - but kitschy and emotionally touching are definitely two different things, and when the other day during a reading from my (anti)war book 'Don't cry, you're still alive', the students suddenly just started singing this song singing, now in the middle of the Ukraine war, I had to pull myself together, tears welled up in my eyes. Welcome to the circle of honorary citizens, Udo! So nice that you are here now!”

Olivia Jones, drag queen and neighborhood entrepreneur: "I'm Udolito's 'Candy Jane' and have often performed with him on this song. But what is particularly close to my heart at the moment is 'What are wars for?'. I didn't think that this question would suddenly become so relevant again for us in Europe. Terrible. But luckily Udo also has a lot of songs that help you to stay optimistic even in difficult times. For me, Udo is a real icon, a living work of art. From the start, he has shown an anti-right stance, always fought for a colorful republic, and never let himself be defeated. He really is 'Strong as Two'."

Otto Waalkes, comedian: “The first impression is not always the decisive one, but it is still the first. And I always heard Udo's 'High in the North' as ​​a hymn to my homeland: 'Behind the dikes', that's where I was born and 'Rum with tea' was also common at home. Speaking of home: A lot of early songs were produced in my living room. Udo has ambushed the whole house with his Galaxo gang. Another reason that I will never forget his rhymes: 'Moto Guzzi' rhymed with 'So ein Fuzzi', 'Sauna' with 'Frau'n da', 'Grete Weiser on the synthesizer' and 'Everything's fine' with "Andrea Doria” – Elli Pirelli, Bodo Ballermann, Rudi At a loss – unforgettable. And I was even allowed to take part in 'Cowboy-Rocker': 'Hey baby, get on, let's go to Las Vegas, clean the sun'! Let's see what rhymes with 'Honorary Citizen of the City of Hamburg'... I'm sure Udo will pull this off too tightly."

Uli Salm, operator of the cult rock bar "Zwick": "It's hard for me to name a Udo favorite song. After all, I've been a big fan from the very beginning, since Udo started writing and singing German lyrics in 1972. That's why I'll start by saying 'Alles Klar auf der Andrea Doria' from 1973. At that time, we and Leinemann were more or less the house band in the famous Onkel Pö. Our then, unfortunately already deceased, brilliant pianist Gottfried Böttger lived at the time together with Udo in a shared flat on Rothenbaumchaussee in a small two-room apartment. Udo showed up almost every evening at Onkel Pö, often joined in on the drums at various sessions and talked a lot about his new lyrics in German. But there are so many other Udo songs - and I love them all."

Katja Suding, former FDP politician: "I like 'Horizont' best - these are memories of endless teenage summers, the unshakable belief in great love, friendships that are made for life. But also falling down, getting up again, carrying on. And the beauty is, it never ends.”

Ralf Martin Meyer, Chief of Police: "My favorite is 'Life'. For me a very life-affirming song that helps us to keep our eyes on a 'carpe diem' despite the difficult times! With his songs, Udo simply hits the tone and the lyrics and the feelings of my generation again and again. I also have a lot of respect for his rocky career path. I have found Udo to be very likeable and unpretentious in our two short phone calls so far. Unfortunately, I have to leave open what it was about..."

Ulrich Waller, director of the St. Pauli Theater and Hansa Theatersaal: "My favorite song by Udo is 'Der Astronaut muss weiter'. One of the most wonderful love songs in German. Incidentally, it only got so good thanks to a trick by producer Andreas Herbig. At the time, he sent Udo a playback to sing along to, which forced him to sing extremely low. As a result, the song has a longing and breadth that he would not have had in the normal voice. As far as I know, this is also the first song in which Udo published his tendency towards space and infinity, which draws him into other spheres. I was lucky enough to get a CD copied from Udo in a basement north of Hamburg before the record came out. Of course, as a friend, I was sworn to keep it top secret. Then at four in the morning I threw open the window in a backyard in Hamburg, played ten times loudly 'Der Astronaut muss weiter' and shouted: Do you hear that, this is Udo's new record."

Annett Louisan, Hamburg singer: “I met Udo in 2004 at the beginning of my career at a charity gala at the Hotel Atlantic. We talked for a while and he gave me some advice that after almost 20 years I think is wiser than ever. He said: Don't give yourself away. Protect yourself and your family. Because 'Hinterm Horizon' goes on, and that's my favorite song too."

Uschi Neuss, Managing Director of Stage Entertainment Germany: "My favorite song by Udo is 'Against the flow, against the wind'! The song marked a crucial scene in our musical 'Hinterm Horizont', which we developed with Udo and Uli Waller. The text moves inimitably Udo-fine between revolt and longing. It corresponded to the lifestyle of many people in the former GDR. And I also think that there is no harm in swimming against the current. Udo gave music with great attitude to all of Germany.”

‹ ›
Keywords:
TexttospeechGrundStefanLauterbachJörnLindenbergUdoTschentscherPeterHamburgEhrenbürgerRothenbaumchausseeElbeUli WallerMusikDDRGronauOtto WaalkesUdo LindenbergOlivia JonesAtlanticKirsten BoiePeter Tschentscher
Your comment has been forwarded to the administrator for approval.×
Warning! Will constitute a criminal offense, illegal, threatening, offensive, insulting and swearing, derogatory, defamatory, vulgar, pornographic, indecent, personality rights, damaging or similar nature in the nature of all kinds of financial content, legal, criminal and administrative responsibility for the content of the sender member / members are belong.
Related News