KABUL (AP) -- Several months before President Joe Biden declared the U.S. withdrawal from Afghanistan, Washington's watchdog warned the Afghan air force that it would collapse without vital American training, maintenance, and aid. Tuesday's declassification of the report allowed it to be released. 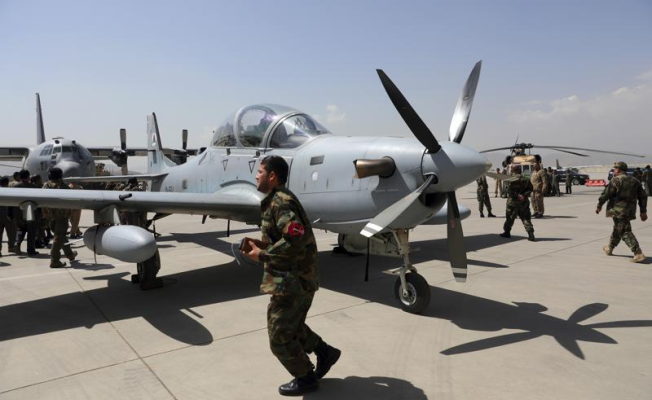 John Sopko, the Special Inspector General for Afghanistan, submits a report to the Department of Defense in January 2021. It states that American authorities were alerted to the fact that Afghanistan's air force was not equipped to withstand a withdrawal. The report focuses on the failure of the United States to train Afghan support personnel, which left the air force unable maintain its aircraft without American contractors.

The 20-year-long war against the Taliban insurgents was dominated by U.S. Air Support to Government Forces. Its elimination, along with inability to fill the void by the Afghan air force, was one of the factors that led to the Taliban's victory.

According to The Associated Press, the inspector general's office said that SIGAR reports are rarely classified. However, a Pentagon declassified version of SIGAR reports is usually issued in less than two months. According to the office, it was not clear why the Defense Department took more than a year to declassify this report or why it took it so long now, five months since the Taliban's takeover.

Since 2008, SIGAR has documented and tracked Washington's expenditures and progress in Afghanistan. Since 2008, SIGAR has produced a series of reports detailing corruption, U.S. leadership failures, and weaknesses in the Afghan army. It also offers suggestions for improvement.

The 2001 U.S.-led invasion of Afghanistan that expelled the Taliban, and the long war that followed, Washington has spent over $145 billion on reconstruction and $1 trillion on military engagement. Billions were spent on building up Afghan military forces.

In April, Biden announced that the last 2,500 to 3,500 U.S. troops would be leaving along with NATO's 7,500 troops. This was in accordance with a deal made with the Taliban. This announcement triggered a rapid decline in the Afghan defense forces.

The Taliban quickly swept through Afghanistan, many areas falling without fighting as Afghan troops fled. Many of them hadn't received their salaries in months from the Afghan government. In June and July of last year, Afghan warplanes struck Taliban positions in certain areas. However, it wasn't enough to stop the tide.

After President Ashraf Ghani, who was U.S.-backed fled Kabul, the Taliban invaded Kabul on August 15. The U.S. had completed its chaotic departure from Afghanistan and evacuated tens of thousands more Afghans by August 31st. Images of young men holding onto U.S. planes as they flee Taliban rule show how desperate they were.

In the months that followed, Afghan officials warned that the air force would not be able to sustain itself on its own. Ata Mohammed Noor was a powerful northern Afghan warlord who was a crucial ally of the U.S. in defeating the Taliban in 2001. He said that the fleet was too overused and poorly maintained.

"Most of these planes are now back on the ground. He said that they cannot fly and that most of them have run out of ammunition.

According to the newly released SIGAR report, between 2010 and 2019, the U.S. spent $8.5 Billion "to support and development" the Afghan air force as well as its elite unit, Special Mission Wing. The report warns, however, that neither is well-prepared. The report also cautions against the removal of hundreds of U.S. contractors that maintained the aircraft fleet.

The report shows that the U.S. and NATO switched their 2019 focus from building an air force to ensuring its long-term survival.

Sopko gave them a failing grade for their efforts, stating that the Afghan air force had not been able get the qualified personnel it needed to embark on its journey to independence.

He stated that a combination U.S., NATO, and U.S-funded contractors had been training pilots, but not training 86% of Afghanistan's Air force personnel.

Sopko stated that even though the U.S. Department of Defense praised the Afghan air force for its progress in combat operations capabilities, pilot and ground crew proficiency as well as air to ground integration, they still struggle with "human capital limitations, leadership challenges and aircraft misuse" and depend on contractor logistical support.