WARSAW (AP) -- Survivors recalled the pain they felt to a world that is slowly forgetting. Israel's parliamentary speaker wept at the German parliament, while politicians warned about a resurgence in antisemitism during Thursday's International Holocaust Remembrance Day. 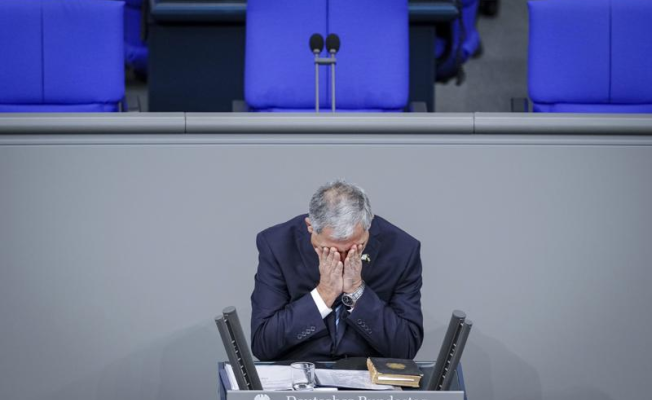 This day falls on the anniversary Auschwitz-Birkenau was liberated, one of the most notorious death camps in Nazi Germany. It is where Nazi Germany executed its Final Solution to the murder of the Jewish people.

A small group of survivors met in an auditorium at the Polish memorial site, which was under brutal German occupation in World War II. Due to Europe's coronavirus epidemic, attendance at the annual event was severely cut. Others joined online.

Auschwitz was the final place where the Nazi German forces murdered 1.1 million people, mostly Jews. However, the site is a powerful reminder of the horrors of hatred and indifference that led to the Holocaust.

Halina Birenbaum (a 92 year-old Polish-born poet living in Israel) recalled her pain remotely. She was 10 years old when the Germans invaded Poland and occupied it in September 1939. She was also 13 when, due to a malfunction, she was led out of Majdanek's gas chamber and taken to Auschwitz-Birkenau.

She recalled seeing "masses of the powerful, but arrogant army Nazi Germany marching cruelly, victorious, into the destroyed and burning streets in Warsaw."

She said that the "countless experiences of inexplicable suffering at the brink of dying are now a distant, unimaginable tale for new generations."

All commemorations took place amid rising antisemitism, which gained momentum during lockdowns. The coronavirus pandemic has only exacerbated hatred online.

Baerbel Bas, German parliament speaker, noted that the coronavirus epidemic has "acted as an accelerant" to already growing antisemitism.

She stated that antisemitism was present. It isn't limited to the fringes, it isn’t among the eternally implacable and a few antisemitic trolling trolls on-line. It is a problem in our society, it affects all of society.

Two men in London were attacked by antisemitic slurs in London, while a 12-year old Jewish boy was attacked in Italy.

Inge Auerbacher (87), a survivor, said that she had lived in New York for 75 year and still recalls the horrible time of terror and hatred. "Unfortunately, the cancer has returned and hatred of Jews has resurfaced in many countries around the globe, including Germany."

Auerbacher stated, "This illness must be treated as soon as possible."

In 2005, the U.N. General Assembly passed a resolution establishing International Holocaust Remembrance Day. It chose January 27, 1945 as the date Auschwitz-Birkenau was liberated in 1945 by Soviet troops.

During the Holocaust, the Nazis and their collaborators killed 6 million European Jews as well as millions more people. Some 1.5 million were children.

Bas stated in the Bundestag, the German parliament that "our country bears special responsibility" for the genocide of European Jews.

Mickey Levy (Israel's parliamentary speaker) broke down in tears as he recited the Jewish mourner’s prayer from a book belonging to a German Jewish boy. He had just celebrated his bar mitzvah the day before Kristallnacht. This was an anti-Jewish violence outburst in 1938.

Levy stated that Israel and Germany had "an extraordinary journey on the road to reconciliation and establishing relationships and brave friendship."

EU legislators listened to Margot Friedlander, a Holocaust survivor of 100 years, as they gathered at the European Parliament. In 1944, she was on the run when she was captured and taken to Theresienstadt in the Czech Republic. Her mother and brother had been deported to Auschwitz a year earlier, where they were both murdered.

Friedlander and her husband immigrated to the U.S.A in 1946. She returned to Berlin in 2010 with her husband. Since then, Friedlander has been touring Germany in order to share her story and encourage remembrance.

She said, "We must be vigilant and look the other way than we did then." "Hate, racism, and antisemitism should not be the last word in historical history."

Charles Michel, head of the EU Council, which brings together leaders from 27 EU member states, stressed the importance of remembering the Shoah, as the number declines each year.

Michel stated that the Shoah is moving closer to becoming a historical event with each passing year. Michel said, "More distant and abstract. This is especially true for the younger generation of Europeans. Paradoxally, this is why the importance of commemoration grows as the years pass. The more important.

UNESCO and World Jewish Congress have partnered with TikTok, a popular online platform for young people, to tackle Holocaust denial. It will enable users to search for Shoah-related terms using verified information, they claim.

Italy's Jewish community and legislators gathered in Rome’s Ghetto on October 16, 1943 to place a wreath at the site where over 1,000 people were deported to Auschwitz. The commemoration was attended by Liliana Segre (an Italian senator for life), a 91 year-old Auschwitz-Birkenau survivor, and other members of the Jewish community.