Wednesday's British government statement indicated that the Dubai government-owned ferry operator, which was at the heart of a bitter U.K labor dispute, likely violated the law by firing 786 crew members without giving notice to replace them. 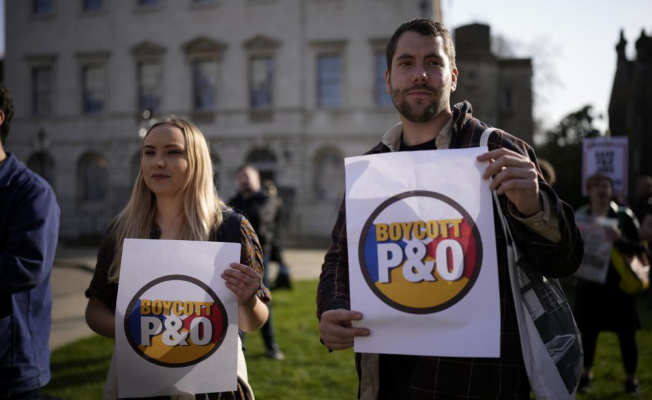 Boris Johnson, Prime Minister of the United Kingdom, condemned the "callous" behavior displayed by P&O Ferries. He also stated that the company appears to have violated British labor laws.

Johnson stated that "We will take action" and warned that fines could reach "millions of pounds" if the company is found guilty.

P&O Ferries claimed that the move was legal as the employees were working on ships not registered in the U.K. P&O Ferries acknowledged that the dismissals caused distress to workers and offered "generous compensatory" to all those involved.

The company stated that it could not have survived without "fundamentally modified crewing arrangements", and that it took the necessary steps to save 2200 jobs. Third-party crew providers are replacing the seafarers who were fired.

After receiving millions of pounds in British government assistance during the COVID-19 pandemic, P&O's staff cuts have caused outrage. They also sparked protests from trade unions at U.K. ports. P&O announced last week that it would cancel all ferry crossings between Britain and Ireland, as well as continental Europe, which disrupted both travel and goods.

Trade unions have opposed "fire and reappoint" policies, which allow companies to fire employees and then re-employ them at worse terms. According to British labor laws, such drastic action can only be taken after consultations with employees.

Peter Hebblethwaite, chief executive of P&O, stated that "restructuring our employees in this manner was not a course we ever wanted to follow."

He wrote to the government, "We did it as a last resort" and after considering all options.

This letter was sent in response to Kwasi Kwarteng, Business Secretary. The request came amid anger from workers and claims that P&O had violated U.K. labor law. Kwarteng said last week that it seemed that the company had not followed the process for firing large numbers of workers. He also notified the company that failing to do so could result in a criminal conviction that could land the company with an unlimited fine.

The National Union of Rail, Maritime and Transport Workers reacted furiously to the P&O letter, stating that the "disgusting statements" were meant to justify the company’s "shameful actions."

According to the ferry operator, a Dubai-government-owned logistics company DP World, the crew members were employed on eight ships in the Bahamas, Bermuda, and Cyprus. Three P&O units in Jersey (a self-governing crown dependency not part of the U.K.) employed them.

P&O stated that crew members who were employed by two subsidiaries located in France and the Netherlands were not fired.

Hebblethwaite stated that P&O had given advance notice to the authorities in the countries where the vessels are registered. P&O believes it didn't violate U.K. laws.

P&O reported that 575 of the workers who were fired accepted the severance package.

The RMT union stated that the package was "blackmail and threats". Workers will not receive the full amount unless they surrender their legal right to bring an action to the employment tribunal.

"They have taken away the jobs, careers, and pensions of our member and thrown them on to the dole with threats that if they don't sign up and give up their rights, they will lose many thousand of pounds in payments," Mick Lynch, General Secretary, stated in a statement.