Wednesday's announcement by the European Union was to assist its member countries in helping millions of refugees fleeing Russia’s war against Ukraine access schools, housing, and healthcare. 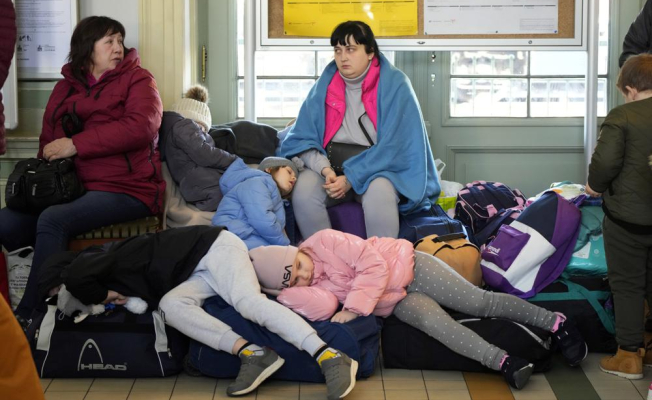 According to the United Nations, more than 3.5 Million people, mainly women and children, have fled Ukraine since Russian tanks crossed the border and Moscow started relentlessly bombarding cities and towns.

On Wednesday, refugees arrived in Poland to report that Russian missiles had struck bread lines, schools and museums. As people flee for safety, their homes have become ghost towns.

Volodymyr Fedorovych (77) said that the Russians "bomb continually." He claimed to have witnessed a Russian missile strike a bread line in Chernihiv's northern region, killing 16 and wounding almost 50 others, some of them losing their limbs.

He said, "We didn’t hear the (missile’s) whistle." "Horrible. It was a hundred people.

Poland has begun issuing ID cards to locals that permit them to work and have access to health services.

Margaritis Schinas, Vice President of the European Commission, stated that the new set of measures builds on an " Temporary Protect Directive" issued earlier in this month as well on initiatives taking place across Europe to welcome refugees.

He stated that the Europeans would translate their goodwill into practical assistance for millions of people forced to flee their homes.

This protection system was created in 2001 as a response to the aftermath of the 1990s Balkan Wars. It has never been used before. It streamlines the entry process for Ukrainians who arrive in the EU. It also outlines entitlements like employment.

Wednesday's announcement will provide support to EU countries in fulfilling those commitments. Although the commission has announced that it will release 3.4 billion euros ($3.7billion) to finance the measures, it is not yet clear how or where the money will go.

Schinas stated that there has been "a remarkable outpouring of support across the European Union with ordinary citizens as well as the private sector, offering accommodation spaces, but this isn't sustainable long-term and without our support."

New measures include a "Solidarity Platform", which will coordinate the work of national governments, EU agencies, and facilitate the movement and accommodation of refugees between countries that are able to host them in the EU or other countries like Canada and the United Kingdom.

Another refugee from Chernihiv was Kateryna Mytkevich. She said that she waited until the very last moment to leave, hoping she wouldn’t have to. Mykevich, now in Poland with her child, said that her son has remained behind. Ukrainian men between 18 and 60 are not permitted to leave Ukraine as long as they fight for their country.

She said, "Our children are dying." It hurts a lot.

Johansson stated that the measures will include safe transporting unaccompanied children. This is despite signs that criminals may be targeting them as well as other refugees.

She said, "Unfortunately we have some signs that cars are waiting to pick up people -- women, children, and vulnerable people." Online services show that there is an increase in the demand for Ukrainian women to be used for sexual purposes. We know that the top five most trafficked human beings in Ukraine were Ukrainians before the war. This is a significant risk.