Leaked documents indicate that China may increase its military presence in Solomon Islands, including ship visits. This is alarming news for Australia and other countries. 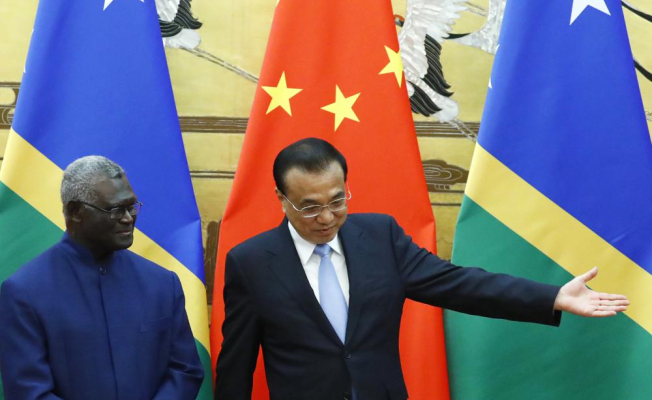 On Thursday, the Solomon Islands announced that it had signed a cooperation agreement for policing with China. Australia found out more concerning the online draft of a larger security agreement.

The draft agreement allows China to send military personnel and police to the Solomons, "to help maintain social order", and for other reasons. It could also send ships to islands as a stopover or to replenish supplies.

China will need to approve any information about joint security arrangements that is released at media briefings, according to the draft agreement.

The Department of Foreign Affairs and Trade of Australia issued a statement stating that it was concerned about any actions that could destabilize security in the region.

According to the department, security assistance was provided by Australia and its neighbours after the riots in Honiara, Solomon Islands' capital last year.

The department stated that "Pacific Island nation have the right make sovereign decisions." "Australia's cooperation is focused on the economic security, prosperity and development of our Pacific family."

New Zealand stated that it would raise concerns about the document with China and the Solomon Islands.

Nanaia Mahuta, Foreign Minister, stated that "if genuine this agreement would be very concerning." "Such agreements are always the right of any sovereign nation to enter into. However, developments in this purported agreement could undermine the security arrangements and institutions that have supported the Pacific region for decades."

When China's Foreign Ministry was asked about the agreement, it stated that Beijing and Solomons had "conducted normal law enforcement cooperation on the basis for equal treatment and win/win cooperation."

At a Friday briefing, Wang Wenbin, a ministry spokesperson, stated that the move was in accordance with international law and international practice. He said it was conducive to maintaining the social order in Solomon Islands and promoting stability and peace in the region and beneficial to the common interests of China, the Solomon Islands, and all other countries in the region.

Wang mentioned China's support of the Solomons previously in dealing with riots, but did not directly cite the agreement.

He referred to Australia and said that China expected "the relevant party" to see it objectively and calmly and refrain from overinterpreting it.

Wang stated, "It is irresponsible to create tensions and unhelpful for regional development and stability that an individual Australian official exaggerated the fallacy in China's so called coercion."

Anna Powles is a senior lecturer in international Security at Massey University in New Zealand. She said that Australia, New Zealand, and the U.S. would all "very concerned" over the draft agreement. It was an ambitious proposal from China.

Powles stated that it would be fascinating to see what goods China may want to send the Solomons in order to service their ships. Also, if there was any potential for mission creep, such as China building a naval base.

She expressed concern that China might try to control the political narrative through controlling information that can be made public.

Powles stated that a lot of the language in the draft agreement was unclear. She also said that it did not specify what kind of military or paramilitary force China might send to Solomons. She claimed it was poorly written or intentionally opaque.

It wasn't immediately clear when the security agreements might be signed, finalized or entered into force.

The Solomon Islands, home of approximately 700,000 people in the country, switched its diplomatic allegiance to Beijing from Taiwan in 2019. This was a contributing factor in last year's riots.

The U.S. declared plans last month to open an Embassy in the Solomon Islands. It laid out, in unusually blunt terms, a plan to increase its power in the South Pacific before China becomes "strongly embedded."

Five years ago, the United States had an embassy in Solomons. It was closed in 1993. U.S. diplomats have been accredited to Solomons since 1993 by U.S. consular agents.

The Solomon Islands government released a news release about its new police cooperation agreement with China. It provided few details. According to the statement, the agreement was signed during a virtual meeting between Wang Xiaohong (an executive vice minister) and Anthony Veke, Solomon Islands Police Minister.

In a release, Wang stated that the bilateral relations between China and Solomon Islands have "developed rapidly and achieved successful results" and that China is ready to "advance practicable cooperation in law enforcement and police."

Veke said that the Solomon Islands government attaches great importance to its relations with China.