Protesters claim ex-employees and former soldiers are under direct threat. 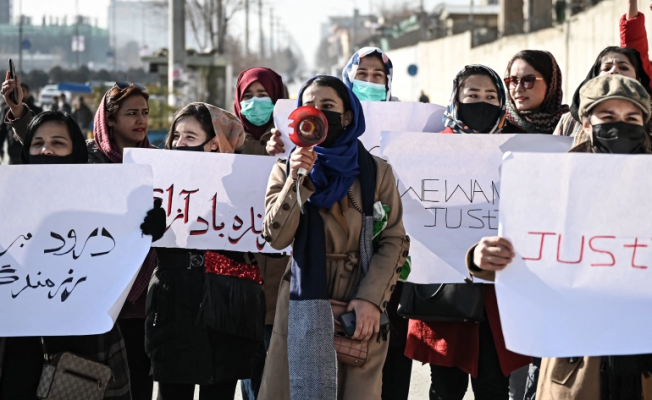 A large group of women marched through Kabul calling for respect for women's rights and accusing Taliban officials of secretly killing soldiers who were part of the former US-backed government.

An AFP correspondent reported that 30 women gathered in front of a Kabul mosque on Tuesday. They marched a few hundred meters chanting "justice and justice" before being stopped by Taliban forces.

According to social media invitations, the Taliban tried to stop journalists covering the march. It was organized against the "mysterious killings of young people, especially former soldiers".

Taliban fighters briefly held a group reporters and confiscated some equipment from some photographers. They deleted images from their cameras, before returning them.

Since August's return to power by the Taliban, it has effectively banned all unannounced protests and intervened to stop demonstrations against its rule.

This protest follows separate reports from Amnesty International, the United Nations and Human Rights Watch that claimed there were credible allegations about more than 100 extrajudicial killings of Taliban members since the takeover.

"I want the world to tell the Taliban to stop their killings. Protester Nayera Koahistani stated that she wanted freedom, justice, and human rights to the AFP news agency.

Protester Laila Basam read aloud the statement and the demonstrators urged the Taliban to "stop its criminal machine."

According to the statement, former soldiers and ex-employees from the overthrown government were "under direct threat", a violation of a general amnesty announced in August by the Taliban.

Protesters also voiced their disapproval at the severe restrictions that women face under Taliban rule.

At the weekend, new guidelines were issued by government that prohibited women from traveling long distances without being accompanied by a male relative.

Mahbooba Saraj (chair of the Afghan Women's Network) spoke from Kabul. She said that the move made it more difficult for women to travel as most "do not have an mahram [male guardian] to accompany them."

She told Al Jazeera that "this is another way to place restrictions on women without apparent reason."

In recent months, Taliban leaders sought to project a more moderate appearance. They claimed that girls and women will be able attend school and work according to Islamic law.

Taliban school for girls is unpredictable. They are banned from attending school in many provinces after sixth grade. However, in more than ten provinces schools are open.

Video footage of Tuesday's women's protest in London was posted online. It also demanded that women be given education and employment opportunities.

Taliban fighters opened fire in the air, bringing an abrupt halt to the protest calling for better food supplies and more work opportunities.