Municipal : postal voting, an alternative that works in Germany

While the second round of the municipal must be held in a month, the debate is intensifying around the vote by correspondence. Several voices were raised in Fra 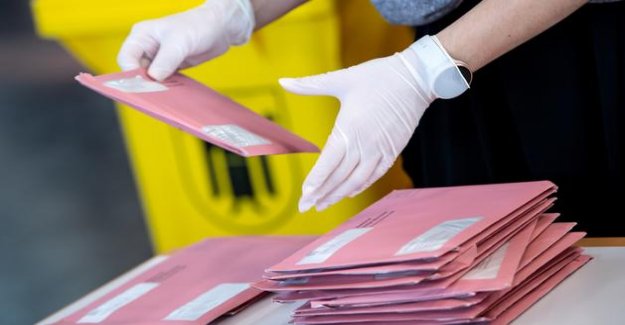 While the second round of the municipal must be held in a month, the debate is intensifying around the vote by correspondence. Several voices were raised in France to convince the government to put into place this practice allowed until 1975 – for the next municipal elections. If the government seemed to have closed the door on this option, Christophe Castaner has shown a more open Tuesday. In response to a question from the mp LR Josiane Corneloup, when questions of the government, the minister of the Interior has assured that the voting by correspondence was "a hypothesis" being considered, indicating that it was necessary "to exclude anything about it."

read also : Municipal : the second round will take place on the 28th of June, unless otherwise advised by the scientific Board

postal voting, his other name, was allowed in France until 1975, when it was removed due to fraud is too many. Voters could then vote at a distance, by mail, through the election materials –the ballot and its envelope, a mailing envelope and a form of information - sent directly from the voter. This mode of election is always possible for the legislative elections for French expatriates, but also for some professional elections.

The defenders of this type of voting also draw inspiration from what happens in other countries where it is allowed, as in Switzerland, in some States in the u.s., and especially in Germany. Beyond the Rhine, the postal vote was introduced in 1957 to facilitate voting for persons frail, aged, ill or disabled and not able to move. "The idea is to ensure the universal character of the vote, to ensure that each citizen has the possibility to exercise his right, says Hélène Miard-Delacroix , professor at the Sorbonne and a specialist of contemporary Germany. Since 2008, the voter does not even need to provide proof.

A mode of popular vote

The operation is rather simple. It is up to the voter to know if he / she wishes to vote by correspondence or by moving in-person or by completing a form which can be downloaded on the internet. After a control of the procedure, the common precise on the electoral list the choice of the voter. "Then, it is rather simple, complete, Hélène Miard-Delacroix . It is necessary to put a ballot paper in an envelope, then slip it into another envelope, pink in color in Germany. However, it is the responsibility of the voter to send his ballot early enough so that it arrives no later than the day of the election".

"This method of voting is very popular in Germany, many of my German friends use it frequently, is Agathe Bernier-Monod, mistress of lecturer in germanic studies at the University of Le Havre Normandy. It is particularly popular among city-dwellers in the large cities". "At the end of the 50s, it was used by about 10% of the electorate, as reserved to the people are prevented. Since then, this figure has been steadily increasing until reaching more than a quarter in the federal elections of 2017 (28.6 per cent)", adds Hélène Miard-Delacroix.

A popularity which does not satisfy, however, not all political observers germans. It denounced in particular the risk of fraud. "It is criticized, as that can be the object of manipulations, highlights Agathe Bernier-Monod. The federal constitutional court has however ruled with two judgments, in 1967 and 1981, stating that the most important thing was to ensure the universality of the vote, cases of fraud are extremely rare".

In addition, voting by mail has served to the Germans during the outbreak of Covid-19. Regularly cited as a good example, the municipal elections in Bavaria, one of the regions most affected by the coronavirus in Germany – were held in march as in France. The first round, held on 15 march, has seen an increase in participation as compared to 2014 (at 58.5% which is 3.5 percentage points more than in 2014), mainly due to the increase in the postal vote. So in the second round, the 29 march, all the polling stations have been closed. The voters then had to vote only by mail. A first.

Or, surprise, the participation was even more important in the second round. "At Nuremberg, the participation rate has gained 4.5% compared to the first round, for example, note Agathe Bernier-Monod. Usually, it is rather the reverse". "Postal voting has helped to neutralize the effect Covid on the participation," says Sylvain Brouard, director of research at Cevipof. The Germans have shown that postal voting was effective in a period of Covid. And besides, they have done in the short term as in less than two weeks they have put in place a vote only by mail". For the researcher, the France should follow the example of its neighbor and to open this opportunity to its voters for the second round of the municipal end of June.

The main reason ? Guarantee the integrity of the ballot. "I'm not saying that the postal vote is perfection incarnate, but it is a solution that is feasible in the short term and that allows you to control the health risks and the risks of democracy. There is a need for limiting the risks, and withholding and give a democratic legitimacy to these elections". On this point it is joined by several political personalities such as the mayor LR of Nancy, Laurent Hénard, or Rachida Dati, candidate LR to Paris. To put pressure on the government, a proposal of law aimed to "introduce postal voting at elections under a state of health emergency" has been registered in the senate on may 24. Its author, senator PS Landes, Eric Kerrouche, believes that it is one of the "least bad solutions for these elections".

A hypothesis "in the study"

Fearing a high abstention rate, as in the first round held on march 15, with a rate of 55 ,34% against 36,45% in the first round of the municipales 2014 – the senator hopes, as in Bavaria, a second round only by a postal vote. "We need to find a way of coping with the apprehension of the voters but also people who hold offices, to vote," writes the senator. To put all the chances on his side, Eric Kerrouche will graft his proposal to another "vehicle legislative discussed on Wednesday morning in the Senate's law commission, on the power of attorney". His proposal should therefore be discussed early next week. It has, moreover, written to the prime minister to ask him to register his proposal on the agenda.

Some observers insist, however, on the difficulty of implementing such a process in so little time. Romain Rambaud, a specialist in electoral law, has written on his blog that it was impossible to choose this option , "only a month before the election, due to the principle of stability of electoral law". "The voters would have the greatest difficulties to adapt and to trust this new system," he wrote. "The government made us go fast on a lot of measures since the beginning of the containment, sweeps, Éric Kerrouche. It is necessary to find solutions that can reassure the voters and ensure that everyone can decide on the future of his town. I think we can go quite fast but it must not procrastinate".

on the side Of the ministry of the Interior, one confirms well in the Figaro that this event "is to study". Christophe Castaner, nevertheless, insisted Wednesday, at the exit of the Council of ministers, on "the cost, feasibility, and the relatively short". Before adding : "It is necessary to see if, in fact, this is the best way to support this election. But I don't want to exclude anything, therefore, that legally, if there was a legislative amendment, this would be possible."

The editorial team conseilleMunicipales : voting, masks, powers of attorney... How will take place the second tourAgnès Buzyn in Figaro : "I have been able to appear as a scapegoat", Municipal: "No party has a vested interest in an election without end"SujetsFranceélections municipalesCovid -19coronavirusAllemagne19 commentairesmordicusle 28/05/2020 at 08:41

We pay taxes online, we should be able to vote online ! a
And that one does not invoke a pseudo risk !
Now, if you wanted to vote and so democracy remains a matter of old, it takes nothing to change...

We cannot be satisfied that less than half of the voting age population is expressed. The electronic voting, associated with the mail-in ballot for the elderly and dependent people : why not.

Yes it is a good solution, for a time there is something good we do not know the copy.