Death of George Floyd : riots at the doors of the White House

The protests are transformed into a wave of riots on a national scale. A week after the death of George Floyd during his arrest by the police of Minneapolis, th 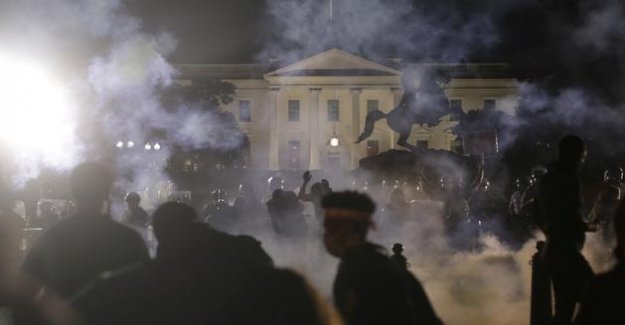 The protests are transformed into a wave of riots on a national scale. A week after the death of George Floyd during his arrest by the police of Minneapolis, the protests that demanded the end of police brutality have turned into violent movements that have caught the authorities throughout the United States.

Since Wednesday, protests have erupted in nearly 140 u.s. cities, from Seattle to Miami and from Boston to Los Angeles. They are frequently transformed into violent riots during the weekend.

The national Guard, and army reservists for the defence of the territory, was mobilized in fifteen states to strengthen the police and to protect the firefighters, but not always being able to curb the violence and destruction.

a curfew has been enacted in at least forty cities.
Parts of Minneapolis, where fires and looting have taken place since Wednesday, the riots came up to the gates of the White House. Sunday evening, the rioters have set fire to the church of St. John, also called the church of the presidents, near the official residence of the head of State. Firefighters have managed to contain the fire. The building which houses the headquarters of the AFL-CIO union has also been set on fire.

demonstrators are confronted by the forces of order may 31, in a park near the White House in Washington, dc. SAMUEL CORUM / AFP

Friday evening, agents of the secret service that provides the presidential security were taken by surprise by the violence of the thugs gathered on the square in Lafayette, in front of the White House. As a precautionary measure, Donald Trump and his family were safe in the underground shelter built under the building. The agents of the Secret service, who were clad in the equipment of the riot for the occasion, have defended during the whole weekend the area around the White House against a mob of violent, under a rain of bullets, stones, bottles and fireworks. Dozens of officers were injured to varying degrees in these clashes. On Sunday evening, fires were burning again in the vicinity of the White House.

The mayor of the District of Columbia, Muriel Bowser, has called for calm. "We recognize and sympathize with the outrage felt by the people after the murder in Minneapolis last week ", she said. "The murder of George Floyd was not the first. People express their indignation and demand measures." But "we are also proud of our city and don't want it to be destroyed ".

Face-to-face encounter between a protester and a police riot, which puts a knee on the ground, a symbol of protest against police violence against Black people. ROBERTO SCHMIDT / AFP

But the understanding expressed by many elected american sounding more and more out of sync with riots becoming more violent. Muriel Bowser had to declare a curfew in the capital federal, which was just beginning to reopen after weeks of quarantine.

In April 1968, riots broke out in Washington after the assassination of Martin Luther King. Some areas of the city had decades to recover from the destruction caused then.

The wave of protest has won most of the major us cities. Looting and acts of vandalism took place a little everywhere, including Boston, Philadelphia, but also in Chicago and Seattle.

In New York, protesters have invested in Union Square, in Manhattan, and clashed with the police on Broadway. The daughter of the mayor of New York, Chiara de Blasio, has been arrested by the police while she was participating in the riot. At least five people have been killed in all of the United States, and the police executed at least 4000 arrests.

Saturday from cape Canaveral in Florida, where he had attended the launch of the new space rocket Space X Falcon 9, Trump has commented on the situation by presenting his condolences, but by showing its firmness vis-à-vis the rioters and looters.

" I called the family of George Floyd and I offered my condolences for their loss. I stand in front of you on the side of all Americans in search of justice and peace. But I stand before you in strong opposition to anyone who exploits this tragedy to loot, steal, attack and threaten. The appeasement, not hate ; justice, not chaos, that is our mission to accomplish, " said Trump.

" The police officers involved in the case have been dismissed. One officer has already been arrested and accused of murder. The authorities of the state and federal lead an investigation to find out what further charges could be justified, especially against the other three . I understand the pain felt by the people. We support the right of peaceful protesters and we hear their calls. But what we see now in the streets of our cities has nothing to do with justice or peace. The memory of George Floyd is disgraced by the rioters, the looters and anarchists. Violence and vandalism are the Antifa and other groups, left-wing radicals who terrorize the innocents, destroy jobs, undermine businesses, and burned buildings."

" The main victims of this hideous and horrible situation are the citizens who live in these communities. These mobs devastate the work of a life of honest citizens and destroy their dreams. At this moment, America is in need of creation, not of destruction; cooperation, not contempt; the security, not anarchy. And there will be no anarchy. The civilization must be defended and protected. The voices of law-abiding citizens should be heard, and heard very strong, " continued Trump.

" We cannot and must not allow a small group of criminals and vandals to destroy our cities and devastate our communities. We must defend the right of every citizen to live without violence, without prejudice and without fear ".