Crisis in Mali : an influential imam defies the president IBK and mobilizes the street

tens of thousands of protesters demanded on Friday 19 June in Bamako, the resignation of president Ibrahim Boubacar Keïta, to which its neighbours in west afric 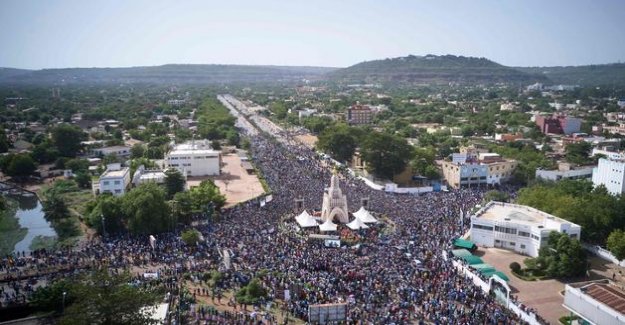 tens of thousands of protesters demanded on Friday 19 June in Bamako, the resignation of president Ibrahim Boubacar Keïta, to which its neighbours in west africa have been advised to set up a government of national unity, and quickly organize partial legislative to relieve tension.

This is the second major protest in two weeks in the capital against the president of mali, known as "IBK", after that which had already gathered together several tens of thousands of people on 5 June and which gave its name to the protest, "the Movement of June 5 - Rally of Patriotic Forces" (M5-RFP).

read also : Mali : dozens of soldiers killed or missing after an attack jihadist

Sign of the political tensions growing in Mali in recent weeks, this movement expresses the exasperation caused by the thousands of victims of jihadist attacks and inter-communal violence, the apparent powerlessness of the State to deal with the economic slump, the crisis in public services and of the school, the perception of widespread corruption.

The events of recent months have fuelled the dispute : in February, president Keita has acknowledged for the first time the existence of contacts with the jihadist groups. In march-April, parliamentary elections were organized, in spite of the sars coronavirus. The leader of the opposition, Soumaïla Cissé, has been kidnapped just before the first round by jihadist suspects. The president's camp is out of the majority, but weakened from these elections. On 30 April, the constitutional Court has reversed a thirty results, of which a dozen for the benefit of the party of IBK, stoking the anger of the opposition.

To the head of the M5-RFP, which brings together religious leaders and personalities from civil society like the political world, is a man of growing influence : Mahmoud Dicko, the imam rigorist and patriot. The imam, after having met with the head of the State, has maintained his call to protest "mass" on Friday, keeping, however, to claim him-even in his resignation. "He has not learned, he does not listen to the people. But this time, he'll understand," he warned Wednesday in front of the press.

in the past, the imam Dicko is presented as a support of the former dictator Moussa Traoré. A former ally of president IBK now black beast's power, he had contributed to his election in 2013. IBK hoped to also use it as a mediator with the jihadists present to the North. The preacher rigorous, eminent figure of public life, has now openly his political commitment and borst for months the "governance of catastrophic," of Mali. In 2019, he had participated in the revolt against the prime minister Soumeylou Boubèye Maïga, forced to resign. It has taken this time the head of a rogue alliance that binds the hostility of the head of State.

After the united nations and the african Union, the economic Community of African States West (Cédéao) has made an attempt to mediate this week. "It has not given anything", acknowledged Friday a member of his delegation questioned by the AFP. "We have agreed to share with the Cédéao because they are good neighbours, we gave them assurances that we're not going to set fire to the country. But we will fight up to the satisfaction of our demand", said Friday the imam to the protesters.

Thursday, the speaker of the national Assembly, Musa Timbiné, has warned those tempted to yield to the pressures of the street. The "logic" of these events, it is "to undermine all the institutions. Thread needle, it is the Mali who will be completely occupied by the jihadists. A lot (of those) who walk are with the jihadists", he said in a plenary session.

After the UN and the african Union, the economic Community of African States West (Cédéao) has attempted a mediation. MICHELE CATTANI / AFP

see also - Mali: zoom in on the disease of noma