iPhone 14: Apple presents its new smartphones and its most resistant watch, the Apple Watch Ultra 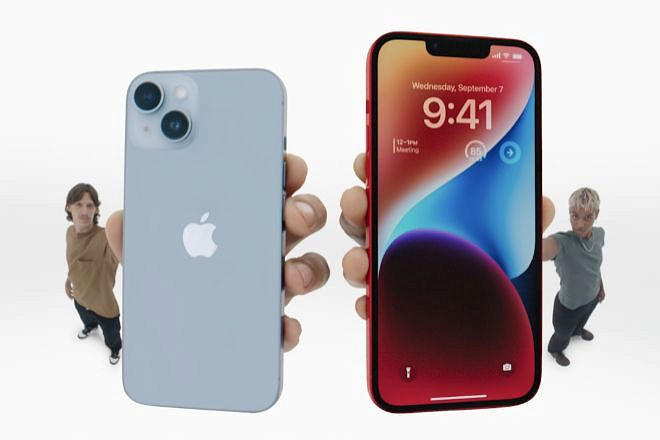 At 7:00 p.m. Spanish time, Apple's Apple Park, its headquarters in Cupertino, California, opened its doors to journalists and brand lovers to host a new company presentation. Like every September, except for the exceptions of the pandemic, Tim Cook came out on stage smiling, showing off some of the company's innovations and ready to present what will be his flagship phones for the next year, the iPhone 14 (or at least until September). following September).

And it is that despite the fact that the smart phone market is suffering the consequences of the economic crisis, the war and the closures in China, Apple seems to be optimistic about the future. In fact, the company managed to maintain positive figures in the first quarter of the year, maintaining second place behind Samsung and growing in market share compared to 2021. In addition, it accounted for 62% of global sales of high-end smartphones. or premium, that is, those that cost more than 400 dollars in the wholesale market, during the first quarter of 2022.

Such is Tim Cook's confidence in his new smartphones (it is estimated that many users have not renewed Apple's phone for a long time and will do so with the iPhone 14), that the company would plan to sell 90 million of its new iPhones before the end the year, according to Bloomberg. This information is contradictory with some previous reports that assured that those of the block will reduce spending by 2023.

In fact, the behavior of Apple on the Stock Exchange demonstrates this strength in the face of the current situation. The company is up more than 7% in the past three months and analysts are forecasting earnings-per-share gains of almost 9% for this fiscal year and around 6% for 2023.

With this panorama, Apple has today presented the new Apple Watch, highlighting an ultra-resistant model, in addition to the new AirPods Pro 2 and the iPhone 14, which have been the last to come on the scene.

As rumored and expected, the iPhone Mini will not have a place in the new iPhone, as Apple has preferred to bet on a larger screen, 6.7 inches, like the iPhone Max, following market trends.

Thus, Apple has presented a new iPhone 14 and a Plus version, with 61 inches and 6.7 inches respectively. "It is the iPhone with the longest battery life ever created," the company said in the presentation.

What is not new is the processor, since the new iPhone 14 will maintain the A15 chip that we already saw with the 13 and 13 Pro last year, nor is the design, which keeps the cameras the same and the notch or upper tab, which does not it varies.

As for the camera, those from Cupertino claim to have made significant improvements, both in the two rear and in the front, capturing up to twice as much light in all its lenses and a new video stabilization called 'action mode'.

In addition, the iPhone 14 will work with eSIM in the United States, so it will not be necessary to use a physical SIM card. And they also have a satellite connection, which allows a new emergency function.

It will be sold in five colors, black, white, light blue, mauve and red (prices in Spain still to be confirmed).

The iPhones that have changed their design, albeit slightly, have been the Pro models. It was rumored that Apple wanted to change its upper notch, turn that black spot into something more useful, and that is precisely what it has done. The now called Dynamic Island is a bar-shaped tab with rounded edges where Apple houses its front camera and its sensors, but with which at the same time you can play so that it becomes a living space where, for example, you can display notifications. An original way to solve that black spot that appears on all phones today.

Also, the power of the Pro models improves thanks to the 4-nanometer A16 chip. The fastest chip ever seen in a smartphone, Apple warns.

Those from Cupertino have decided to start with the watches at their event. As the rumors had predicted, Apple has presented a new watch model, the most resistant Apple Watch so far and very focused on extreme sports. The Apple Watch Ultra has the largest and brightest screen so far in an Apple watch (49 mm), in addition to being constructed of titanium with sapphire glass, which gives it great durability. It also incorporates a new speaker to improve its use in nature.

The design changes slightly, with the side crown and power button protruding slightly, plus new straps specifically designed to be stronger. But even more outstanding are the 36 hours of battery that it allows with a single charge, which is extended to 60 with the saving mode.

It includes a compass, an improved GPS, dozens of improvements in sports features, such as diving, and a night mode so you can still see well at night.

Specifically, the Apple Watch Ultra can be reserved starting today and will be available in stores starting Friday, September 23 at a price of 999 euros, the most expensive Apple watch to date.

For less adventurous users, the company has also renewed its Apple Watch Series 8. In this case, the same design as in the Series 7 is maintained, but one of the great novelties is the body temperature detector. Thanks to a temperature sensor, the new Watch is able to help women in ovulation cycles, especially for those women who are trying to conceive or even to detect a serious health problem.

In addition, to the already fall detector of the Apple Watch, the Cupertino company has added a traffic accident detector. Thanks to an accelerometer, the watch can detect the specific moment of the impact (front, side, rear or overturning) and this, together with artificial intelligence, allows the Watch to detect if a crash has occurred and be able to notify the emergency services immediately.

The new Apple Watch Series 8 boast 18 hours of battery life, but incorporates a new Battery Saver mode to extend the time up to 36 hours. In addition, it offers fast charging.

It will be sold from September 16 in three finishes, black, silver and gold.

Also, Apple re-releases a cheaper version of its watch, the Apple Watch SE, $100 cheaper than the Watch Series 8 and also with the new traffic accident detection feature.

There were many theories about what was going to be the third product that Apple would launch today at its event in Cupertino. From augmented reality glasses to the possibility of a foldable. But the most reliable rumors pointed to the Airpods Pro 2, and so it has been. "The most advanced AirPods Pro yet," said Tim Cook.

Sound and audio quality are greatly improved on this new model, according to Apple, as is active noise cancellation, so you can isolate yourself when you want or hear the outside world when you want.

In addition, Apple has changed the way Airpods are handled, which despite maintaining the same design, have one more sensor that allows you to raise and lower the volume. In addition, it improves battery life, with 6 more hours of music playback. and it will be possible to find a helmet if it is lost (this is very useful) emitting a sound that would guide us to it.

‹ ›
Keywords:
TecnologíaApple Inc.IPhone
Your comment has been forwarded to the administrator for approval.×
Warning! Will constitute a criminal offense, illegal, threatening, offensive, insulting and swearing, derogatory, defamatory, vulgar, pornographic, indecent, personality rights, damaging or similar nature in the nature of all kinds of financial content, legal, criminal and administrative responsibility for the content of the sender member / members are belong.
Related News