We are at the gates of a new technological revolution. 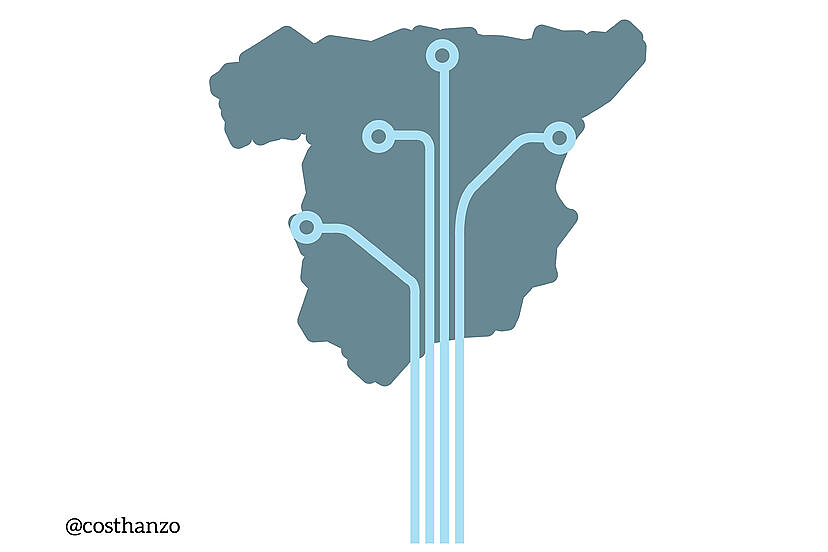 We are at the gates of a new technological revolution. We have both the focus and the resources to go hand in hand with our European partners on this path towards a new reindustrialization of the continent.

20 years ago, Tres Cantos closed what, inaugurated at the end of the 1980s, was AT's first microchip factory

With an endowment of 12,250 million euros, it was created to "strengthen the design and production capabilities of the microelectronics and semiconductor industry in Spain". Between both moments of our recent history, Europe has gone from having a share of 24% in manufacturing (20 points more at the beginning of the 90s), to a mere 10%. And, at the same time, the manufacturing capacity in our country has become something residual, with companies in the sector dedicated to the design or integration of components.

The main challenge, as well as our great opportunity, is to convince some of the big international players to establish one of their new manufacturing centers in Spain. To give an example, Pat Gelsinger announced a few months ago his company's investment plans in Europe, starting with two factories in Magdeburg (Germany), increasing its facilities in Leixlip (Ireland), and announcing large investments in Italy, France, Poland or France.

It will also invest in Spain, but the 400 million joint investment with the Government for the development of its new design laboratory at the Barcelona Supercomputing Center, being of special relevance, seems very scarce compared to the 17,000 million that its investment in Germany represents or the 12,000 million announced for Ireland.

For this reason, the new Perte, and especially the Manufacturing Plant Construction Axis, should help us tip the balance in conversations with the big players in the sector, indicating that, without a doubt, we must, want and can be there. Not in vain, the approval coincided with the intervention of the President of the Government at the Davos Forum, with the focus placed mainly on attracting investment from large technology companies.

The question is whether we will arrive on time. It is enough to remember that the French president already announced in October last year investments of 6,000 million in this area in the presentation of the France 2030 strategy. Our announcement comes months later, although it duplicates in ambition -and in budget- the initiative of our neighbors . The important thing, in any case, is to ensure the mobilization of private initiative, both from an investment perspective (we should aspire to mobilize volumes similar to those considered by the Perte of the electric vehicle), and execution capacity -today, when reach of very few companies on the international stage.

The other noteworthy element within this axis is that, although the bulk of public investment will go to the creation of state-of-the-art factories (below 5 nanometers), 2,100 million will be allocated to the development of capacity in more mature technologies. Here it is important to note that the vast majority of the components used in our industry, from automobiles to household appliances, do not have the same processing requirements as our computers or smartphones, and that only the automotive industry has seen its capacity diminished 15% last year due to lack of chips.

The rest of the elements of the plan, although they account for less than a quarter of the announced investments, are no less important for that. On the one hand, the nearly 2,500 million planned both for the reinforcement of our scientific capacity and our design strategy, would already suppose by themselves one of the most important Perte published to date, with a volume of investments similar to that committed to the aerospace industry. On the other hand, the investment capacity and execution of the different lines of the plan are a little more in our hands and those of our companies than the big decisions about the location of state-of-the-art microchip factories. In the absence of local manufacturing capacity, our local fabric around the semiconductor industry has become specialized in both microprocessor design and research and development, areas in which we have experience, talent and business.

Although much will be unraveled from the various components in the coming weeks, let me highlight a couple of performances. In 2018, the first Microelectronics IPCEI (Important Projects of Common European Interest) was presented. Almost all of the projects developed under this financing instrument by the states were for companies from Germany, Italy, France and Great Britain, with no presence of our companies.

Three years later, there are 20 member states participating in the 2nd IPCEI of microelectronics, with several companies and technology centers in our country opting for the development of projects that allow strengthening the European electronics industry. And, clearly, the announcement of 500 million euros within this line will allow us to reinforce the competitive position of our companies in the development of these key projects for the sector.

Finally, and although smaller in amount (we are talking about "only" 80 million), the plan recognizes an important reality: although our universities and research centers today generate great professionals in the world of engineering, electronics, or software development, this commitment requires highly specialized profiles that will need to be trained and attracted to our country, as some associations in the sector are already showing.

It is, therefore, about creating a training and qualification network in the field of semiconductors, encouraging the return of our professionals distributed by companies at an international level, and being able to become a talent attraction pole.

We are, therefore, at the gates of a new technological revolution. We have both the focus and the resources to go hand in hand with our European partners on this path towards a new reindustrialization of the continent. It is important not to miss this train.

‹ ›
Keywords:
OpinionTecnologíaEmpresas De TecnologíaInnovación Y EmpresasComisión Europea
Your comment has been forwarded to the administrator for approval.×
Warning! Will constitute a criminal offense, illegal, threatening, offensive, insulting and swearing, derogatory, defamatory, vulgar, pornographic, indecent, personality rights, damaging or similar nature in the nature of all kinds of financial content, legal, criminal and administrative responsibility for the content of the sender member / members are belong.
Related News