Facebook removes ads from the campaign Trump with a nazi symbol

Facebook has removed advertisements published by the electoral campaign of Donald Trump, who attacked the extreme left, and had a red triangle reversed, the sym 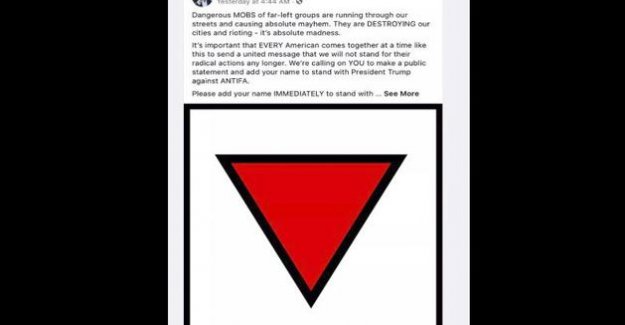 Facebook has removed advertisements published by the electoral campaign of Donald Trump, who attacked the extreme left, and had a red triangle reversed, the symbol used by the nazis to designate political prisoners in the concentration camps. "We have removed these posts and pubs because they violate our rules on hate organized", said a spokesman for the giant of social networks on Thursday.

The alert was first given by the Washington Post, which reported on these content issues to Facebook. The platform was then unpublished, the ads that had the red triangle. "We do not allow the symbols represent organisations that are hateful or ideologies hateful unless it is to condemn them," said Nathaniel Gleicher, director, regulations on cyber security at Facebook, when asked during a hearing at the u.s. Congress on Thursday on the Washington Post article. "Our rules prohibit the use of this symbol (...) without the context that condemns it or discuss it", said the spokesperson of the network.

The red triangle appears on some of the messages of the campaign sponsored by the u.s. president, the vice-chairman Mike Pence, and the page of the campaign team, "Team Trump" ("team Trump"). The text attacked the "dangerous hordes of groups of extreme-left" and called on users to sign a petition against the "Antifa", or anti-fascists, as the head of State was accused, without evidence, to cause degradation in the protests against the police violence. The nazis were wearing this symbol of political prisoners of the left.

The debate on the moderation of ads and political platforms through the United States for months, at least 140 days of the presidential election. Facebook allows pubs to be political in nature and refuses to submit to the words of the candidates and elected representatives in its programme of verification of the facts, in the interest of the public to make up their own mind. But their messages remain subject to the general rules against terrorism, the glorification of violence or false practical information on the elections.

This article says : "the "Antifa", or anti-fascists, as the head of State was accused, without evidence, to cause degradation in the protests against police violence." Without evidence, really ? And in France also there was no evidence of the activities of the antifa ? The hatred of the Figaro to Trump is certainly very powerful.

I don't think that Trump, unaware of the basic, must have had knowledge of the meaning of this symbol.

This is not the symbol that door Mélenchon, the back of his jacket ?