The Azulillo club's slogan for its subscriber campaign is "You are Linares".

Every summer, the Linares Deportivo performs it in El Posito. 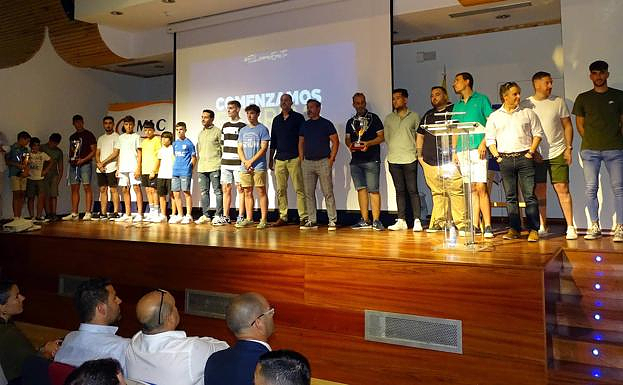 Every summer, the Linares Deportivo performs it in El Posito. It is no longer a subscription campaign presentation. Instead, it is a gala that includes all letters. There are moments of laughter and excitement, and it leaves you with the desire to have your card in your hands.

The action was organized well and directed by Javier Vallejo. It was split into two parts this year. The action began with a large projector on an empty stage that looked like a cinema to launch four videos of different meanings.

The first video was a review about what the board does every day, how it combines professional life with the club. It will be the last board as such. Next year, there will be a general assembly of shareholders to convert to Sociedad anonima deportiva.

This video is a tribute to "where we came from and where are we going", and focuses on the meeting between the blue players who defended their shirt in the Second Division, and who met in Linarejos in spring. They shared old photos of matches, which the players had given to them. These are part of the treasure box that the club hopes to display in its future museum.

From the beginning of Linares' golden years to the future. The third video is dedicated to the new generation, the academy, and the new sections who joined the club after the arrival of Linares Women, futsal, and electronic sports.

After a rollercoaster of emotions, there was a break. However, the club had to thank the fans and show gratitude. There were many metopes of appreciation for Pena El Minero who was always available to help the team move.

Season after season, San Joaquin School was honored for its support. They send messages of encouragement and support the club even in difficult times. The center has blue symbols. Javier Vallejo said that they are a school that provides education, but also the values and love of their colors.

One of the most touching moments was Manu Garrido's surprise. He is an unconditional fan, well-known for his motivational videos that he releases every year. These videos have been used on more than one occasion in subscription campaigns. After overcoming a brain tumor, he was able to go back to Linarejos. This time it was the club that dedicated a video with his best work to Manu.

The club's main characters took to the stage with a big heart to present the season's ticket campaign. For the two thousand subscribers who renewed their subscription last season, the price will remain the same. However, there is an increase for those who purchase new cards.

Prices for new subscribers range from 125 to 245 euros for adults and 90 to 170 euros respectively for young people. Subscribers get access to all Primera RFEF matches, as well as the rest of the academy's futsal and women's matches.

This year, the children's card can be maintained for 10 euro, which allows seniority to continue. The sympathizer card costs 35 euros and gives you the right three games from the regular season at Municipal de Linarejos.

‹ ›
Keywords:
LinaresLemaClubAzulilloCampanaAbonados
Your comment has been forwarded to the administrator for approval.×
Warning! Will constitute a criminal offense, illegal, threatening, offensive, insulting and swearing, derogatory, defamatory, vulgar, pornographic, indecent, personality rights, damaging or similar nature in the nature of all kinds of financial content, legal, criminal and administrative responsibility for the content of the sender member / members are belong.
Related News