It was nearly two years ago that Mac Jones, a crutch-wielding Tua tagovailoa and other Alabama players spent an hour at Fun Spot America in Orlando. 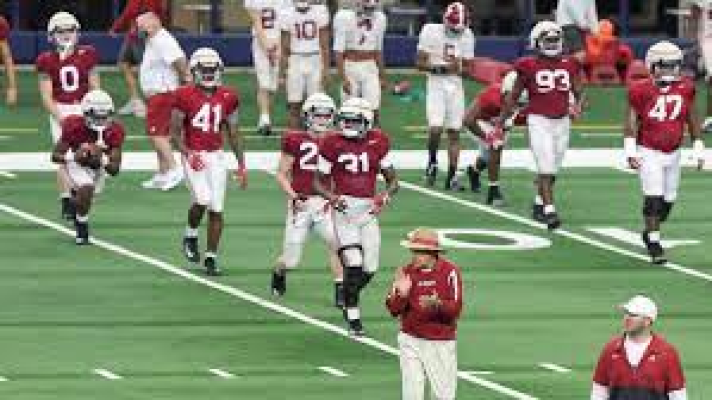 Although it wasn't quite Six Flags, and the Citrus Bowl wasn't quite the College Football Playoff, it was the usual escape from the rigors of practice that bowl games offer.

Three months after the COVID-19 pandemic, "bowl week", which was once a common term for players, has not returned to its former meaning.

Alabama's trip to Dallas for the relocated Rose Bowl game was without extracurricular activities. The same thing happened to Alabama's two-day-ahead trip to Miami for its national championship game game.

The Cotton Bowl featured some of the usual non-football attractions, but those were altered when Omicron was introduced to the CFP.

Alabama arrived in Dallas on Sunday. They declined a Tuscaloosa stay until Wednesday. However, the same risk mitigation approach has been used as last season.

Cincinnati was also present Sunday, but many players talked about going to the Cowboys and Washington Football Team games at AT&T Stadium Sunday night.

Dylan O'Quinn, offensive lineman, stated that despite being in the nosebleeds, it was still amazing to see everything and to watch the crowd go wild.

Desmond Ridder, Bearcats quarterback, and Jerome Ford running back also spoke out about their attendance at the game.

Ford stated, "It was surreal and kind of starstruck." It was amazing to watch the fans go wild and see players play. It was quite entertaining."

Ford was later asked by a reporter whether there had been any "backlash" regarding players attending the game, and what precautions were taken. Coach Luke Fickell responded.

Ford stated that "our training staff does an excellent job with COVID" and all the precautions and measures we should take."

Fickell stated Sunday that the senior-heavy team knew it would have to make sacrifices relative to a regular bowl-game week, but that his team, almost all vaccinated and nearly entirely healthy, would not live in fear.

He said, "We are smart about what our doing." "We are aware that we have a task ahead of us and will not allow anything to get in our way."

Except for the Tigers' virus-related issues, Alabama did not experience any major COVID-19 impacts on its roster in its undefeated 2020 campaign. Golding stated that the recent increase in COVID cases reminds him of an earlier spike in August fall camp, when Alabama implemented stricter protocols. This was also true of last season.

He explained, "That's what i brought up to our player." "I replied, "You know what? "I said, "You know what? Last year, a lot omen made the decision to give up their entire lives outside of this facility for a common goal." It wasn't going out. It was spending time with their families at times. To work for each other, to achieve a common goal. That goal was to win a championship.

"And so, I believe that's what it brings back to. That's what I believe it brings back our guys. We've been there before. This has been done with the pandemic before. You can't be selfish. It is important to remember that what you do to one person in a room, you also do it to them."

Some Alabama coaches missed games last season due to positive COVID-19 test results. This included Nick Saban in Iron Bowl. Last week, the current staff was in a similar situation. Bill O'Brien, offensive coordinator, and Doug Marrone were both positive for COVID-19. They had to work remotely until the SEC updated its rules to reflect the latest CDC guidance.

This week's six days in Texas are milder than Alabama's last trip to AT&T Stadium, which was during the 30s. While quarterback Bryce Young admitted that the traditional bowl experience involves "going to places" and "doing fun events", he said Saban instructed players that they would only remember what they did on weekends.

Young and the other captains of teams met before Friday's Cotton Bowl and decided that they weren't going anywhere.

He stated that "we were going to stay at the hotel to try to cancel out any COVID potentials." We can't do it all. We came together as a group, as leaders, and as a team. It was a shame that we couldn't leave the hotel room.

"We are aware of the reality of COVID, and the modern world in which we live. We all made that decision. It's a sacrifice, but it's what we must do to be in the best possible position.

Will Anderson, a fellow captain, said that there was no complaining among the players about the directive. Anderson also stated that the team has a hospitality room that allows players to meet and play video games together.

He said, "We cannot let anyone go out and get COVID and bring back stuff like that." "So, the team has done a great job."

Cincinnati has been practicing this week at AT&T Stadium in the early mornings, followed by Alabama in mid-afternoons.

Alec Pierce, wide receiver, said that Coach Fick had said that the morning practice should be Alabama-focused. "And the afternoons are a time when we can have more fun and enjoy the bowl festivities, etc."

Mike Denbrock, the Bearcats' offensive coordinator, stated that the team has been social-distancing and using masks whenever necessary.

He said, "We don’t venture very far from this." "I think the best thing to do for the younger generation is to constantly remind them and keep it in their heads that they've worked so hard to get this chance. The last thing that we should do is compromise that opportunity by being out of character.

"And these guys did a great job of keeping their eyes on the ball and making sure that they were doing what was necessary to be successful in the field."