For the return to ACB of Coviran, prices between 157 and 415 Euros 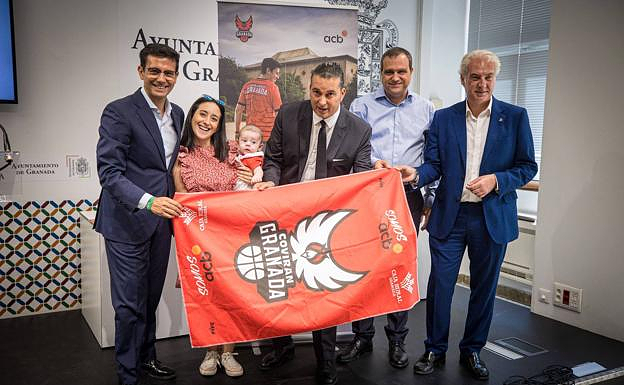 Fundacion CB Granada presented its new season ticket campaign to the Granada City Council on Thursday. This was long awaited since the return of basketball in Granada to the elite. The Coviran Granada presented its new season ticket campaign under the slogan "The dream is in you hand" and an emotional presentation video. It announced reasonable prices that are sensitive to the labor and economic contexts of the city's population, despite the apparent increase in the category. The entity is hoping to encourage everyone to sign up for the project with prices ranging from 157 to 394 euros for renewals and 165 to 415 for new registrations.

The campaign will be open online as well as in person from the moment it is presented. It is also open for renewals and new card holders for the first-time. Members who are already members can renew their seats until July 20, which will be extended for any changes or new registrations.

The president explained that the season ticket grants access to all league games as well as the presentation of the club. The matches against Real Madrid and Barca will not be charged extra, so there won't be any additional cost.

They estimate that single tickets for non-subscribers to each game will cost between 15 and 25 euro on average. However, this is not known until the calendar is revealed, and first data about the subscription campaign becomes available.

Club under two beautiful stories, the campaign is orchestrated. The video begins with the story of Luca, who has only five months left in his life. They met at Palacio De los Deportes where they were volunteers. The spark was ignited there. Javi, a 10 year old player from the club's academy, is the protagonist of the second story. His enthusiasm for promotion made him viral. He is only 10 years old, which is the same age as the club. The video shows the club's sporting growth and the emotional growth of that child, who in a very short time has been able have the best basketball in Europe. The background music plays the popular song "How nice it is when you leave home".

Oscar Fernandez, president of ACB, spoke after the video. He expressed his gratitude for all the hard work and the beauty of the climb. "We couldn't have imagined that ACB would present the ACB season ticket campaign in ten years." It is hard for me to believe. It has helped to make the city what it deserves. The motto is a symbol of what the club stands for, a dream that you can achieve. He pointed out that it is the campaign that has the most emotion. It is Javi's story, which is about more than 700 children from the club's schools as well as the thousands of other children who have never been able to play elite basketball in Granada. They will have the opportunity to do it this year

Concerning the season tickets, he mentioned the possibility of splitting them between Caja Rural de Granada. These are very reasonable prices. Oscar said that there would be discounts for retired people, the unemployed and those with functional disabilities. There will also be a 40% discount for child passes regardless of where they are located. For greater security and comfort in the Palace, children under 4 years old can still be admitted for free. However, they will need to purchase a nominal ticket. To pick up each game, the ticket must be taken to the box office with the family book. There is another option. You can also purchase a subscription to a magazine that will be a keepsake for a child younger than 4 years old. He explained that the price is 5 Euros and it is valid for the entire year to avoid waiting in line at the box office. He doesn't give up his right to a seat.

The club will continue to give a gift to new members who renew their membership. It is a gorgeous red towel featuring the club's logo (the phoenix) in the middle and the motto "Somos ACB". The president admitted that he was very amarrategui when it came to estimates. The president said that he had transmitted to the ACB an average of just over 4000 spectators last year, which included the 2,500 nominal members, children from the schools, and the agreements with 15 municipalities and companies. He admitted that he knew him well and said that he always shot down. This was in response to their belief that there will be a massive increase in subscribers because of the illusion created by the rising population.

‹ ›
Keywords:
PreciosSensatosEurosVueltaElite
Your comment has been forwarded to the administrator for approval.×
Warning! Will constitute a criminal offense, illegal, threatening, offensive, insulting and swearing, derogatory, defamatory, vulgar, pornographic, indecent, personality rights, damaging or similar nature in the nature of all kinds of financial content, legal, criminal and administrative responsibility for the content of the sender member / members are belong.
Related News