Dani Rodriguez, a Granada-born sprinter, won the silver medal at the 200-meter race at The Mediterranean Games in Oran (Algeria). 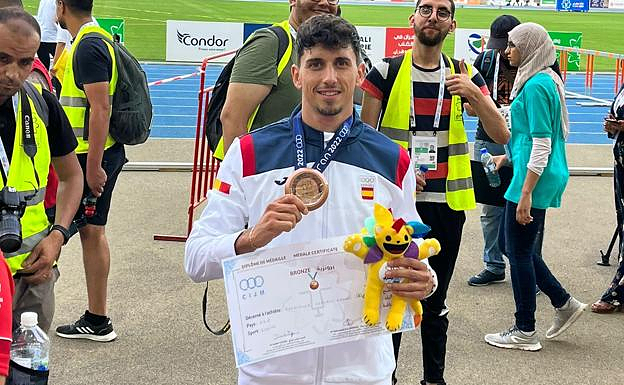 Dani Rodriguez, a Granada-born sprinter, won the silver medal at the 200-meter race at The Mediterranean Games in Oran (Algeria). The sprinter from Granada was fastest at the start, and was named as the leader in the 200-meter race. However, Ramil Giluyev (20.21), a favorite for the title, was able to defeat him and win gold. Diego Aldo Pettorossi (20.65) also beat him, gaining the bronze medal with his 20.78.

The Spanish championship of autonomous federations took place this weekend. Five people from Granada participated in it, and Andalusia was able to become the second-best community in Spain after Catalonia. The relay was attended by Arian Tellez and David Jimenez, sprinters. Andalucia came in second in the 4x400 with a time 3:27.57. Tellez finished second in the 4x100. The Andalusian team stopped at 43.57. Javier Sanchez finished on the podium at 400m hurdles with 51.71 seconds. The medals were not awarded to the other two competitors. Paola Almazan was seventh in 200-meter hurdles with a time 24.85. Pablo Sanchez was ninth in 3,000-meter hurdles with a time 8:18.28.

‹ ›
Keywords:
DaniRodriguezLograMedallaBronceJuegosMediterraneo
Your comment has been forwarded to the administrator for approval.×
Warning! Will constitute a criminal offense, illegal, threatening, offensive, insulting and swearing, derogatory, defamatory, vulgar, pornographic, indecent, personality rights, damaging or similar nature in the nature of all kinds of financial content, legal, criminal and administrative responsibility for the content of the sender member / members are belong.
Related News