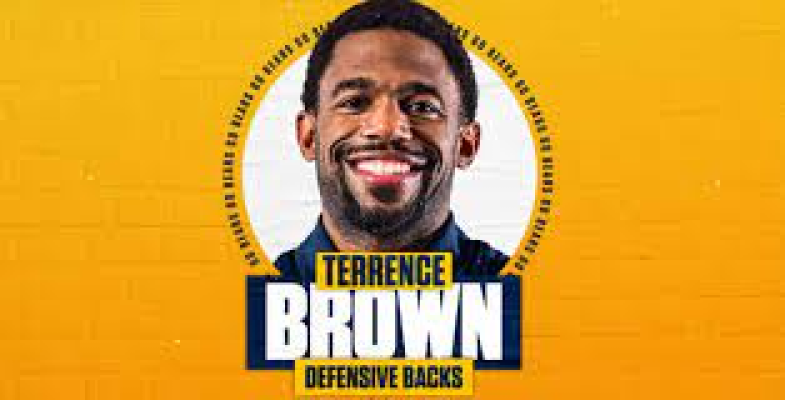 Terrence Brown, an assistant defensive backs coach at Washington, was added to the Cal coaching team and will be sharing the duties of coaching Tre Watson's defensive backs.

Brown was a Stanford football player from 2009 to 2012 and was a starting cornerback in Stanford's final two seasons.

Justin Wilcox stated that Terrence Brown is a great addition to our coaching team. He is a young, enthusiastic coach who is very familiar with the Pac-12. Terrence has impressed me in our discussions about the position. I also received great feedback from many members of our staff who worked with Terrence or have had mutual coaching relationships with him.

- A 2021 defensive backs team was formed that helped the Huskies to lead the nation in passing yards allowed (143.3 ypg), a staggering 25.0 yards more than No. 2 Cincinnati is the Pac-12's pacesetter and ranks third nationally in team passing efficiency defense (106.71). They also rank in the top 15 nationally for all penalty categories.

- In 2021, coached a pair of All-Pac-12 defensive backs: Kyler Gordon and Trent McDuffie. Elijah Molden was a first-teamer in 2020, when McDuffie was awarded second-team honors.

- Two seasons spent at Vanderbilt, with the Commodores reaching Texas Bowl and their best record in eight years. His first campaign in 2018 was his best.

- In 2018, Joejuan Williams was selected as second-team All Southeastern Conference selection. Williams was the cornerback for the SEC and led the way in interceptions (4) while also leading the league in pass breakups (14) & passes defended (18). He was then selected by New England in round 45 of the 2019 NFL Draft.

- Worked alongside a number of future NFL defensive backs such as Budda Baker and Sidney Jones. Taylor Rapp and Keith Taylor were also involved. Zeke Turner was an All-American, while Baker and Jones were both All-Americans. During the period, five Husky defensive backs earned All-Pac-12 honors.

- As the cornerbacks coach