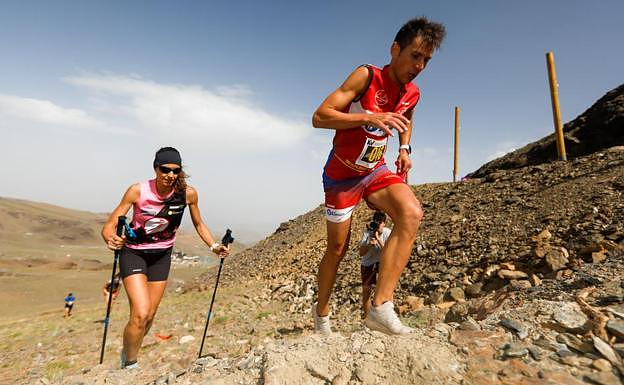 Patricia Pineda (Sportiva), from Jerez, and Alvaro Gormez (Brooks), from Granada won this Sunday's vertical kilometer in Sierra Nevada. It is valid for the world circuit. The climb to Veleta was a frantic one, with strong gusts of winds at the lower and middle levels.

Two regular Sierra Nevada vertical kilometer runners were also crowned at the race. Alvaro Gomez and Patricia Pineda, both with multiple editions of their legs, were close to winning, but they never reached the top of this podium until Sunday. The Jerez native took a fifth- and third-place, respectively. Last year, the man from Granada was fourth.

The race route was 4.8 km long and had 1,050m of positive slope. It was always above 2,000m altitude. The winners followed the race strategy, with a fast start to keep them in the lead.

Pineda said at the finish that he started strong and didn't push too hard to get stronger up top. Pineda, a Jerez native who finished the race in 54:58, said that he felt very comfortable throughout the course. "I was able press as much as I wanted. I was alone for almost the entire race and didn't look back.

Alvaro Gomez from Alvaro, who has completed all of the Sierra Nevada vertical kilometers since 2014, decided to "set a little higher pace" like Pineda. Although the strong winds of wind had penalized us from the beginning it disappeared as we ascend.

He said, "Three runners had gone together," and that he managed to get them all near the Borreguiles station. He won the Sierra Nevada summits in 47:27 minutes with a distance of about one minute.

‹ ›
Keywords:
PatriciaPinedaAlvaroGomezImponenKilometroVerticalSierraNevada
Your comment has been forwarded to the administrator for approval.×
Warning! Will constitute a criminal offense, illegal, threatening, offensive, insulting and swearing, derogatory, defamatory, vulgar, pornographic, indecent, personality rights, damaging or similar nature in the nature of all kinds of financial content, legal, criminal and administrative responsibility for the content of the sender member / members are belong.
Related News