Four answers to the Swiss EM-participation

Where are the games held? Because the Uefa is 60 next year, will take place the European championship 2020 in twelve cities. Many Fans and experts in dispute 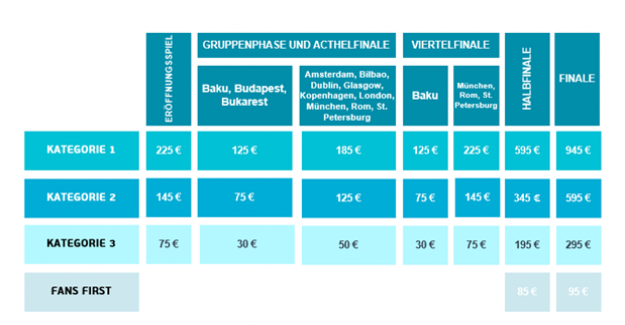 Where are the games held?

Because the Uefa is 60 next year, will take place the European championship 2020 in twelve cities. Many Fans and experts in dispute – and the fact that she came to the European football Association on the idea to integrate an Asian city as the host (Baku). The eleven other hosts are Amsterdam, Bilbao, Budapest, Bucharest, Dublin, Glasgow, Copenhagen, London (Wembley), Munich, Rome and St. Petersburg. The quarter finals will be held in Baku, Munich, St Petersburg and Rome, the two semi-finals and the Final will be played at Wembley.

How do I get Tickets?

1. December will open the next application window to buy Tickets. Via Uefa's website takes you to the Ticket Portal, where you must first register. Either there are single tickets or the Option "Follow my team" – this is a Swiss Fan following for example the national team to all games, regardless of location and round. When purchasing a ticket, the choice of the category is possible, the seat can not be selected. The ticket prices are not only depending on the category and round, but also from the venue. The Opening Game (12. June in Rome) costs in category 1 225 Euro, the cheapest Ticket there is in Baku for the category 3 of the group games and quarter-finals. Who's the EM-Final (12. July) to the feudal view in category 1, you must pay 945 euros.

what are the pots?

Before it gets more and more complicated it is, here is the current output location of the pots: Fix in the first pot Italy, England, Belgium, Spain and the Ukraine. If Germany wins against Northern Ireland, completes the Team of national coach Joachim Löw, the group heads. The Swiss national team, is in the pot 2 , is so make sure on one of the already mentioned Teams. Together with the Swiss to Poland, Russia and Croatia are there to France and the Netherlands are likely to come .

This means that the defending champion Portugal is probably the worst possible opponent from the pot 3 . Finally it is confirmed, however, until all groups are complete, and if on the last round no more Surprises happen. Fix, however, Turkey, Denmark, Austria and Sweden – if everything goes according to Plan, is likely to in addition to Portugal, the Czech the third pot complete. Right open pot 4 by the first Finland fix. The four winners of the Playoffs , for which the Teams qualify through the Nations League can, plus the second qualifier from group E (Hungary, Wales or Slovakia ) make up the fourth pot.

What are the enemies of Switzerland threaten?

As promised, now it is complicated. To anticipate: On 30. November, the draw will take place at 18 o'clock in Bucharest, may need to be drawn after the Playoff again. But after the series.

The hosts have already been assigned to a group, or two per group. However, do not have to be qualified, such as, for example, Azerbaijan, all of them. Until now, the groups will present themselves, like this:

*= If qualified (over Nations-League-Playoff, theoretically, is still possible)

as with Russia in group B already, a Team from pot 2, it can be Switzerland, so not Hing is lost. As an example, for a horror group, the Switzerland could meet, therefore, on Spain, Portugal and the European championship semi-finalist Wales (if you qualify).

Should participate in a host in the Nations-League-Playoff, may be after the conclusion of these games, a further draw will be necessary. Because Two Teams from the same pot cannot be in the same group – what you may not know, the Uefa at the time of the draw, but, because the Playoff is taking place in March 2020.

but that's not enough of the draws. Because what happens when two hosts meet? Two group games guaranteed to home – who comes in a direct duel to the home, in turn, must decide a lot.

After all: Who will be European champion, which is decided on the court and not by means of a draw. Still. (fas)