Tariff shield, taxes, superprofits... The hot spots of the 2023 budget

Before entering the arena on October 10 to submit the 2023 finance bill to the deputies of the nation, the government is presenting it this Monday September 26 in the Council of Ministers. 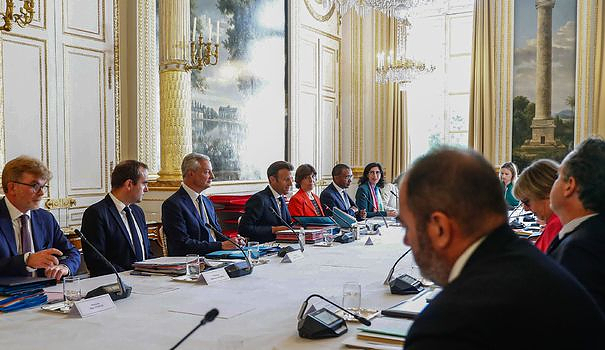 Before entering the arena on October 10 to submit the 2023 finance bill to the deputies of the nation, the government is presenting it this Monday September 26 in the Council of Ministers. In the current context of high inflation, the content of this PLF, a document listing the expenses and revenues for the coming year, is eagerly awaited. And it is a delicate balance between protecting households against rising prices and reducing the public deficit that the government must find. Here are the main measures that he will present.

Initially scheduled until December 31, 2022, the price shield, which limits the increase in gas and electricity prices, will be extended in 2023. Currently capped at 4%, it will be capped at 15% next year . In fact, this is equivalent to an average increase in gas bills of 25 euros per month - compared to 200 euros without a shield - and a monthly increase of 20 euros in the electricity bill - compared to 180 euros without a shield. The cost of the operation, estimated at 45 billion euros, could be lowered to 16 billion, the State considering involving the producers of renewable energies, whose profits climb sharply with the increase in the price of the kilowatt hour. . The government thus seems to prefer, for 2023, the tariff shield to the principle of the "energy voucher", supposed to help households pay their heating bills. The payment of an energy check, of 100 or 200 euros depending on the annual income, is nevertheless planned for the end of 2022.

Workers who have seen their wages increase this year have been worried in recent weeks about an increase in their income tax. To avoid this, the State has decided to reassess the tax scales next spring. Thus, the tranches will be indexed to inflation. The latter being 5.2%, the revaluation is set at 5.3%. This measure will cost the State 6.2 billion euros.

While it was to be removed in one go, the contribution on the added value of companies, known as CVAE, will be lowered over two years. This is a production tax that is part of the territorial economic contribution, and whose gradual abolition was decided in 2020. This decision to spread the end of this tax over two years will allow the State to pocket 4 billion euros. The CVAE is a subject of tension, companies demanding its abolition as soon as possible, while communities are sorry for its imminent disappearance.

In order to encourage the French to carry out insulation work, the State plans to increase the budget allocated to the "Prime Renov", (2.6 billion euros against 2 billion today). In 2021, only 2,500 owners had improved the energy performance of their properties, when the State had the objective of renovating 80,000 homes. The 2023 budget will also grant an envelope of 1.5 billion euros for ecological transition, with the creation of a fund intended to support community initiatives. This device will be partly financed by large companies, which have made record profits this year.

Mentioned by the opposition parties to help, in particular, to finance the ecological transition, the taxation of the superprofits of companies is not part of the measures initially envisaged in the PLF 2023. Nevertheless, the subject will necessarily be debated in the National Assembly. , the Nupes working to pass amendments to this effect in the budget text. This week, a bill providing for such a measure was signed by more than 240 parliamentarians. TotalEnergies has warned that it will stop its rebate on the price of fuel if a tax on superprofits sees the light of day.

Thorny subject of this second five-year term, pension reform could slip into the budget text. As the presidential party only has a relative majority and the activation of article 49.3 is not excluded to pass the 2023 budget, the presence of an amendment on the reform of the pension system could cause the anger of the National Assembly, even, before the hour, that of the street. Especially since the Ministry of the Economy has displayed, for several days, a desire for consultation, inviting all group presidents to come and discuss at Bercy.

The measures planned to help households fight against inflation and to finance the ecological transition must not, however, make us forget another stated objective of the government: the reduction of the public deficit. Although the economic situation is gloomy, Bruno Le Maire intends to respect France's commitments to Brussels by containing the public deficit to 5% of GDP, before bringing it down to 3% by 2027. Faced with so many objectives that could prove to be contradictory, there is no doubt that the return to Parliament promises to be turbulent.