Presidential mandate, 49.3: when Sarkozy and Holland teach Macron a lesson 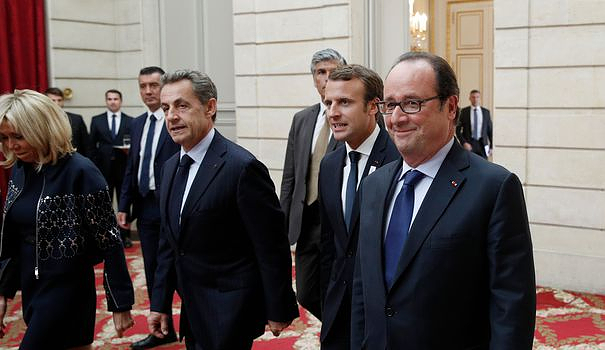 On February 25, Emmanuel Macron received successively François Hollande and Nicolas Sarkozy. The time is serious, it is a question of talking with them about Ukraine, which Russia invaded a few hours earlier. But we don't make presidents again. The looming electoral campaign invites itself into the discussion. Emmanuel Macron thus informs François Hollande that he is going to suggest the establishment of a cross-party commission responsible for reflecting on the institutions. He does not propose to his predecessor to participate in it, even if the rumor will then circulate that the Elysee Palace plans to invite and Hollande and Sarkozy - "it would be a bit of a committee of old people", observes the socialist in private. Today, we have moved back three boxes and the Head of State seems to be waiting for better days to relaunch his idea.

Institutions, trap to c...? There is no consensus on the subject, even among our successive presidents, responsible, according to article 5, for "ensuring respect for the Constitution". It is enough to remember what Emmanuel Macron said during his campaign and to listen to the reflections of Nicolas Sarkozy and François Hollande, this Wednesday during a symposium organized at the Institut de France, to be convinced of this. The presidential mandate, its duration and its number? The candidate Macron mentioned the return to the seven-year term without making it part of his program and advocated a better articulation between this mandate and the legislative elections. He regrets - never in public - the limitation to two of the number of consecutive presidential terms. From 2018, a year after his accession to the Elysée, he let go in front of visitors: "The only elected official on whom this is imposed is my apple."

Nicolas Sarkozy is responsible for this development, he who is the last to have revised the Constitution, in 2008: he is the author of the 24th reform of the Fundamental Law since 1958 (five revisions between the beginning of the Fifth Republic and 1991 , 19 from 1992 to today) and not the least important since it covered more than half of the articles. Today, he "willingly acknowledges that [the limitation to two consecutive presidential terms] is a subject of debate, I do not claim to have the truth on that". He nevertheless argues that "power is dangerous, you have to put a limitation, it's a protection". But let no one tell him that he has weakened the function: "If your authority is undermined, it is because you are fragile." On good terms...

François Hollande speaks from experience: "It's already not easy to be re-elected, he remarks with a smile, to be re-elected twice, that would give ideas, but bad ideas". He now offers him the six-year term, "to give the president time", and deputies elected for four years, to ensure democratic breathing. He wants to "go to the end of the logic of the Fifth Republic" by advocating a presidential regime, which involves the disappearance of the post of Prime Minister.

Where we also talk again about this famous article 49 paragraph 3, which is now in the headlines. "I defend 49.3 in the current framework, I even used it", recalls François Hollande, who would remove it on the other hand in the event of the establishment of a presidential regime. Nicolas Sarkozy, he limited its use in the texts in 2008 and has never used it. "I refused Prime Minister François Fillon and President of the National Assembly Bernard Accoyer the authorization to use it, he underlines, because if I use it, it will be a proof of weakness." What he adds about 49.3 and the pension reform will resonate to the ears of Emmanuel Macron and also the leaders of LR: "We must measure the cost-risk ratio. There is a cost for the president, there is also one for those who supported my reform of raising the retirement age from 60 to 62 and who should explain why they do not support the change from 62 to 65."

The right will appreciate, she who rages willingly against certain points of the Sarkozy revision of 2008, in particular the Priority questions of constitutionality, the QPC (recognized right of any person to maintain that a legislative provision is contrary to the rights and freedoms that the Constitution guaranteed). Although he knows nothing of what the elected Les Républicains think, Nicolas Sarkozy - "As you can see, I no longer do politics" - responds by targeting Laurent Fabius: "The President of the Constitutional Council is my most dynamic, he does not remember that he voted against..." But he does not budge and indicates that in his mind, this reform "was only a stage": he wants the Constitutional Council to transforms into a supreme court, above the Council of State and the Court of Cassation (the right will hate it and François Hollande indicated that he was against).

Emmanuel Macron failed to reform institutions during his first five-year term. His predecessors lavished funny encouragement on him. Message from Nicolas Sarkozy (who, to approach the constitutional subject, finds a way to talk about Zweig, Van Gogh and the Lascaux cave!): "I have never taken so much trouble in my life as to pass this revision. It will be long before another revision of the Constitution." Message from François Hollande: "If a reform has not been presented during the presidential campaign and in some way ratified by the victory of the candidate, it is very difficult to carry it out." The modernization of institutions, a commitment of Emmanuel Macron already stillborn?