This was to be one of the founding acts of the "change of method". 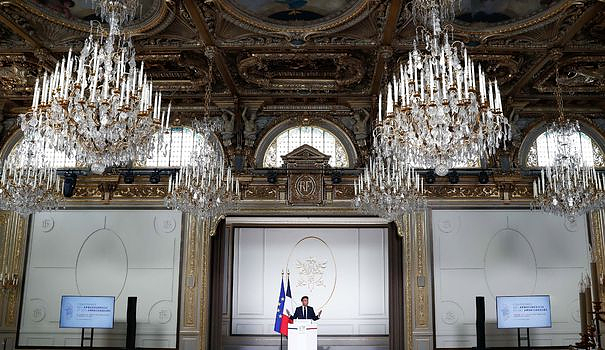 This was to be one of the founding acts of the "change of method". This Thursday, Emmanuel Macron will launch the "National Council for Refoundation". A body supposed to bring together all public actors around four major themes for long-term reflection: "full employment, school, health, aging well and ecological transition", according to Élisabeth Borne, who recently defined the outlines. The High Commissioner for Planning and main ally of LREM François Bayrou (MoDem) will be the secretary general.

But still it is necessary that there are people, to "refound". The Prime Minister assures that the event "will bring together some fifty representatives of society and experts to shed light on the debate", such as the President of the High Council for the Climate, the First President of the Court of Auditors and the Governor of the Bank of France. But some attempts to dig out volunteers, especially in the political field outside of macronie, have been ground to dust. No question, like Jean-Luc Mélenchon, of participating in "season 2 of the big talk".

Thus, during the summer, many weighty participants castigated this "unidentified political object", according to the expression consecrated by PS Senator Patrick Kanner. The President (LR) of the Senate Gérard Larcher registered at the top of this list, indicating his refusal by letter, even calling on the Head of State to "respect everyone's institutional prerogatives". From the National Rally to La France insoumise via Les Républicains, the Socialists, the Ecologists and the Communists, no opposition party wishes to participate in the inaugural meeting.

Many see it as an attempt to override Parliament, and the fragile majority of Emmanuel Macron. Like Jordan Bardella, the interim president of the RN: "Since the National Assembly is in the image of French society (...), the government tries to find places for discussion, alternative agoras “, he denounced on BFMTV this Sunday. “The domain of the law” must remain “the exclusive domain of Parliament”, inquired the president of the National Assembly Yaël Braun-Pivet (Renaissance) while approving this “dialogue body”.

Others, like Julien Bayou, the national secretary of Europe Ecology - The Greens, doubt the results of the initiative. "This new method seems completely out of step with the secrecy of the Defense Council (and) the contributions of the Great Debate have been ignored (...), the proposals of the Citizens' Climate Convention buried", he wrote in a letter. to Emmanuel Macron, made public on August 31. The latter accuses the president of holding a "draft" course. "If it's just a staging, it has no interest," added Olivier Fort, the first secretary of the Socialist Party, this Sunday on France Inter.

A few days earlier on France Inter, Élisabeth Borne had regretted this posture: "I find it a bit paradoxical to refuse the discussion. It is important that we can share the diagnoses, discuss the objectives", around the "considerable challenges" of the current period. The Prime Minister promises that "the door will remain open". Will therefore be able to rush in, if they change their minds at the last moment, the representatives of United Territories, the association which federates the Associations of mayors (AMF), departments and regions, the CGT, or even Edouard Philippe , selected at the Congress of UNESCO World Heritage Cities... Good news for the organizers, the CFDT, the CFE-CGC and the CFTC intend to participate in this initiative which responds to their wish for a more sustained dialogue between the partners. social and government.

A few days before the opening, those close to the executive still believe in it, at least on the front. "I have always defended this idea according to which we must find areas of consensus to advance a certain number of diagnoses which never advance", explained François Bayrou, saying he was "ready to help by all means to guarantee the good performance of this approach and so that no one feels instrumentalised". Citizens also had to be drawn to participate. But since June, the idea has not been confirmed. The remodel is still under construction.