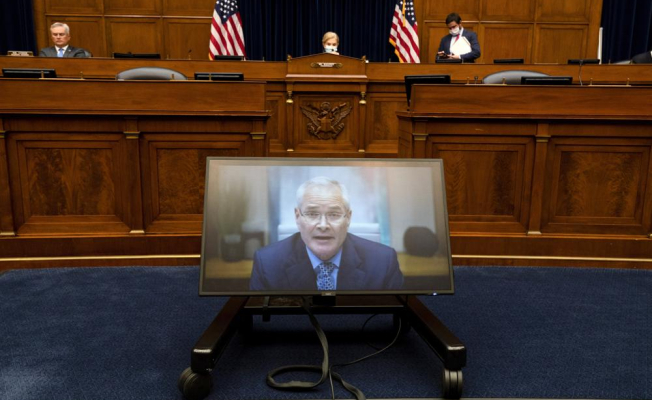 They sparred with congressional Democrats Thursday over claims that the industry had concealed evidence regarding the dangers of globalwarming.

ExxonMobil CEO Darren Woods testified at a historic House hearing. He stated that the company has "long acknowledged the reality of climate change and has devoted substantial resources to addressing these risks."

Woods stated that the oil giant's statements about climate are "truthful, fact-based,... and consistent" in line with mainstream climate science.

The statements made by Woods and other executives were immediately challenged by Democrats who accused them of participating in a decades-long industry-wide campaign of spreading disinformation about global warming.

She was referring back to 1994 hearings with tobacco executives, who famously said they didn't believe that nicotine addiction was real. This was just one example of the many references to the tobacco hearing, as Democrats tried to get information from oil executives about whether they believed in climate change or that oil burning contributes to global warming.

Maloney stated at the end the seven-hour-long hearing that she would issue subpoenas to the committee for documents not provided by the oil companies but requested by the committee.

Republicans accused Democrats in grandstanding about an issue that is popular with their base, President Joe Biden's Climate Agenda.

James Comer, the Kentucky Representative, was the top Republican on the oversight committee. He called the hearing "a distraction from the crises which the Biden administration has caused", including the increase in gasoline prices of $1 per gallon since January.

Comer stated, "The purpose is clear: To deliver partisan theatre for primetime news."

After months of public efforts by Democrats, this hearing is the result of their efforts to obtain documents and other information about the role of oil industry in preventing climate action over many decades. Maloney and other Democrats stated that while the fossil fuel industry has scientific evidence of the dangers of climate changes since at least 1977, it spread doubt and denial about the damage its products cause.

"Do you believe that climate change is a serious threat to our existence?" "Yes or no?" Maloney asked Shell Oil President Gretchen Watkins.

Watkins responded, "I agree that it is a defining problem for our generation, absolutely."

Watkins, Woods, and other executives from oil said that they agree with Maloney about the existence and danger posed by climate changes, but refused to pledge their support for efforts to reduce greenhouse gas emissions.

David Lawler, CEO of BP America, stated that the company is pledging to support low-carbon policies that will in fact reduce the world's carbon emissions to zero.

Rep. Ro Khanna (D-Calif.), who heads a subcommittee for the environment, stated that he hopes that "Big Oil won't follow the same playbook and Big Tobacco"'s in misleading Congress.

Khanna stated, "As you're sure, that didn’t work out too well for them," These companies should be held responsible.

The committee issued a memo on Thursday claiming that public support for climate change reforms by the oil industry was not matched with meaningful actions and that billions of dollars have been spent to block them. Oil companies often boast about their efforts in producing clean energy through advertisements and social media posts that include videos or photos of wind turbines.

After a top Exxon lobbyist was captured in secret video boasting that Exxon had used "shadow groups" to fight climate science and targeted senators to weaken Biden’s climate agenda, Maloney and others have taken particular aim at Exxon.

Keith McCoy (an ex-lobbyist for Exxon based in Washington) dismissed Exxon's support for a carbon tax on fossil fuel emissions, calling it a "talking point."

The comments of McCoy were made public by Greenpeace UK in June. They secretly recorded McCoy and another lobbyist during Zoom interviews. Exxon last month stated that McCoy is no longer employed by the company.

Exxon's Chairman and Chief Executive Officer, Woods, condemned McCoys comments and stated that the company stands behind its commitment to working on climate change solutions.

Michael Wirth, Chevron CEO, also denied misleading the general public about climate change. He said, "Any suggestion that Chevron is trying to disinformation the public and mislead them on these complex issues are simply false."

Khanna and Maloney strongly disagree with that statement. They contrasted the tactics of the oil industry with those used long ago by the tobacco industry in resisting regulation, "while selling products which kill hundreds of thousands of Americans."

Rep. Katie Porter (D-Calif.) accused the oil industry "greenwashing” its climate pollution by misleading ads that emphasize renewable energy over its core business of fossil fuels. Porter said that Shell spends almost 10 times more money on oil, chemical, and production than it does on renewables like wind power.

Watkins was told by Shell that Shell is trying to convince people it is addressing climate change, but in reality it is continuing to invest money in fossil fuels.

While the U.S. and the oil industry are right to focus on reducing carbon emissions, the world still consumes 100,000,000 barrels per day of oil, according to Mike Sommers, president, American Petroleum Institute, which is the top lobbying group for the oil industry.

Sommers stated that the industry group supports climate action. However, he said that legislative proposals that penalize American industry would reverse America's energy leadership, hurt our economy, and weaken our national security.