Barely finished the march, Jean-Luc Mélenchon welcomed the “tremendous success” met by this mobilization of October 16. 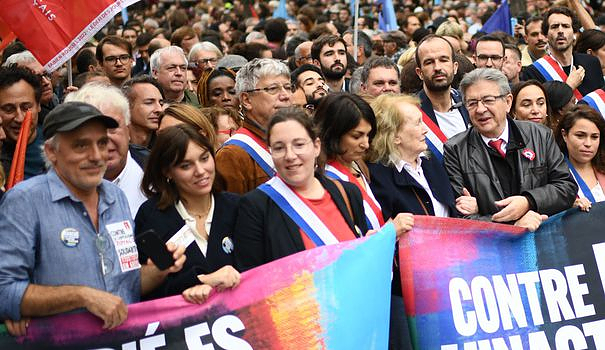 Barely finished the march, Jean-Luc Mélenchon welcomed the “tremendous success” met by this mobilization of October 16. According to the organizers, including France Insoumise, 140,000 people gathered at the start of the Place de la Nation, in Paris, to protest against the high cost of living and climate inaction. "We have already won our bet. This is just the beginning," said LFI MP Aurélie Trouvou, kingpin of the march for which a hundred buses had been chartered throughout France. The police estimated the number of protesters at 30,000.

Speaking from the platform of a truck, parked in the middle of the crowd, the leader of the Insoumis assured: "You are going to live a week like you don't often see, it's the great conjunction, it's we are the ones who start it". Before adding: "today is day one, it's the popular march. Day two will be 49.3 and day 3 will be the general strike, 18 (October)".

At the head of the procession, many figures from all over the left were seen. From LFI deputies Manuel Bompard and Clémentine Autain to environmentalists Sandrine Rousseau and Éric Piolle, via Philippe Poutou (NPA). Fist raised, Jean-Luc Mélenchon, red tie and tricolor cockade on the lapel of the jacket, arrived alongside the Nobel Prize for Literature, Annie Ernaux. "The message is simple: we want a better sharing of wealth", for his part estimated the number one of the Socialist Party, Olivier Faure, during this "meeting while walking", addressing a V for the victory of Nupes to the demonstrators. . Many "yellow vests", but also many retirees were seen in a colorful parade with a few Phrygian caps and punctuated by songs.

A few tear gas bombs were launched by CRS on the sidelines of the parade in the middle of the afternoon, after projectiles were thrown in their direction, noted an AFP journalist. Law enforcement officers charged. Several businesses were degraded on the route of the march, from Nation towards Bastille. A Société Générale agency was also ransacked by men dressed in black and masked, near Trousseau square.

The police services harbored "real fears" in the face of "the arrival of violent people from the ultra left, ultra yellow vests who would like to disrupt the demonstration". In total, more than 2,000 police officers were mobilized to secure the procession.

The march comes in the midst of a strike at TotalEnergies refineries which is causing fuel shortages. And after the mobilization of September 29, another interprofessional day was launched for next Tuesday by the CGT, with FO, Solidaires, FSU as well as youth movements. The Minister of Public Accounts Gabriel Attal, for his part, castigated "a march by supporters of the blocking of the country".